A Tirade on the Relative Left and Modernity 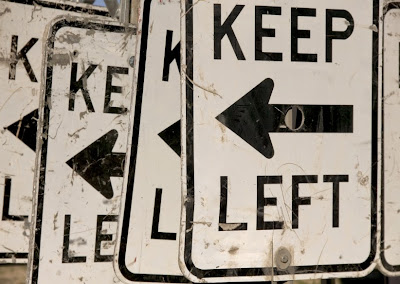 Let’s get one thing clear about the ‘left’. They aren’t.

There are, generally, two forces determining the relativity of the ‘left’.

One, the contemporary position of the ‘right’, and,

Two, the overarching geopolitical framework wherein it does its very best to carry on whatever traditions that it is allowed to by the ‘right’. It is in this sense that the ‘left’ can, generally, be referred to as the ‘relative left’.

For all those whom are critical of the ‘left’, remember this, the ‘rights’ that you support is one of the achievements of the ‘left’.

Wresting power from the patricians, the monarchy, the colonialists, the neither ‘Holy’ nor ‘Roman’ empire, the Act of Supremacy, the Magna Carta, the ousting of British colonial pirates, women's rights, racial equality, et cetera, were left in spirit, but right in perspective.

What I mean by ‘right in perspective’ is that whenever power is usurped from the last tyrant-that-be, the principle of relative relief [author’s term], amongst others, comes into play – that is, breathing a little better because the garrote has been relaxed as opposed to being taken off. With this comes the desire to maintain the status quo as it seems much better than the past. This is when the ‘left’ swings ‘right’ and turn into modernists.

Laws are enacted, party hats are passed around, and then a culture of compensation, recuperation, and thereafter, expression, coagulates and ossifies the present as worthy of replication in the appreciation of the here-and-now for the morrow-and-after.

This is the ‘modernisation’ that comes in the wake of every singular relief-inducing anti-clockwise twist of the tourniquet - for the right-handed. How else did Labour become ‘New Labour’?

Modernisation is not an event that takes place in a continuous and unbroken linear progression of history, but an event that occurs every so often whenever we move from one political epoch to the next. It is cyclical. Every period in history has its 'modern' period. For the Chinese, for instance, the Han Dynasty was the 'modern' period. It was the 'coming of age' of a system initiated during the Qin Dynasty where Legalism was imposed as the state's ideology. The people were made intellectually less, and became the sort to confuse wealth for all-round health. And this lowered expectation of one's own humanity was delivered and came to fruition during the Han - hence, the Chinese today are known as 'the Children of the Han'.

Hence, we can appreciate, for instance, the Act of Supremacy as heralding one ‘modern’ period, and which thus makes Henry VIII a ‘lefty’. Even the bourgeoisie who overthrew the feudal and Monarchist scheme of things throughout the globe were ‘lefties’ whom wrested power from the last exclusive locality and 'democratised' it to a degree. But, as I had stated, every movement from one political epoch to the next harbingers a ‘modern’ period. And people thinking that they are living in modern times is that which tends to perpetuate the maintenance of the last left movement forward, as they think that they have arrived at the shores of the land of the milk and honey.

So what about the remnants of the left whom have yet to be ushered by the collar into ‘modernity’?

Well, we can’t really call them the ‘left’ either. From the moment ‘modernisation’ begins to erect self-validating wonders to itself (what i call, 'the Perspectival Infrastructure'), the ‘left’ becomes the 'relative (to the right) left', and takes on a siege mentality and begins to do its utmost within constrained condition, not to get rid of the said constrained conditions, but to bring about as much of what it can within said conditions. You could say that they know they've lost. So they are scrambling for concessions within less than ideal conditions. For instance, seeking greater welfare, rights, amongst other boons within a nation.

You could say that the distance of right and left from each other determines how far either can go.  So if the communist-anarchists were to take the position of the left of the today, that would signal to the right that there quite a bit of 'demand' for the left, and hence, the right would do a sidestep to the left to make it more appealing to the electorate.  The same logic applies in the inverse.  Unfortunately, the more people compensate for the life within a 'right' sort of civilisation, the less the left becomes appealing.  And hence, the left can become more right in inclination to keep up its appeal.  And that is what has transpired.

That is why, whilst the left is willing to take up arms when their nation is attacked by forces without, they cannot but afford others whom are assailed upon by their own nation anything but raised brows, placards and ‘Oi!s’.

At times like these, the true left can take on wholly fearsome characters like that of the thankfully non-ubiquitous ‘terrorist’. For instance, the transnational ‘terrorist’, is actually a ‘lefty’ who appreciates the value of humanity despite the illusory borders of the ‘modern’ nation-state. Of course s/he does not realise this her/imself, but just acts against an oppressive force that seeks to impose a class-system where the clime from which they hail is placed in a lower position.

And environmentalists also necessarily occupy the true left for they are globally empathetic, and seek to address the ‘modernists’, or the ‘modern left’s’ oversights in constructing a modern machinery that is focused on national human interests – albeit class-biased. So, on the one hand, the ‘terrorist’ serves as a reminder of the value of empathy despite borders, and the environmentalists direct our attention to the value of sentience despite humanity's self-absorption.

When I looked at Sidney Webb's 'Clause 4' of the Labour party, and appreciated how this had mutated into doublespeak when Blair stuck his curled-up pinkie into it, I couldn’t help but appreciate the main impediment in the way of the left.

Han-till Death Do You Part

As the stranglehold of exploitation is released ever so slightly with changes in political epochs, not only can there be a greater relief enjoyed, but the larynx can also devolve into a state that it requires not greater relief.  That is the highpoint of the periodic foot-binding modernisms that has afflicted human history. The clearest example of such degeneration can be perceived in ‘modern’ times in the emerging ‘(east) asian democracies’ (aka, ‘Confucian’ ‘civilisations’) that deem human rights, democracy, freedom of speech, demonstrations, amongst others as ‘western’ frivolities emerging from a wholly dispensable western chaotic ‘faith’. They present the west a valuable lesson on how progress can be paradoxically paired with gross human degeneration.

In efforts to prevent such a malaise from afflicting the west, which is fast becoming a flickering wax-powered beacon of civilisation in the face of the Hun, or more aptly, Han of the East, we on the left need to engage in a major rethink of how we might be contributing to civilisation’s march toward devolution by not truly recognising the dichotomies that exist between the ‘modern left’, the ‘relatively real left’ and the ‘true left’. We might find, upon a most certainly discomforting critical introspection, that all we are doing is attempting to bail out the water in the imcomplete project of the ‘left’ and which might just contribute to its perpetuation and the relegation of the ‘true left’ to periphery of civilisation. It is this weakness that can lead to the west becoming nothing more than ‘west’ in direction, but an ‘asian democracy’ in perspective.