Confucian Societies - Not By Reason Alone 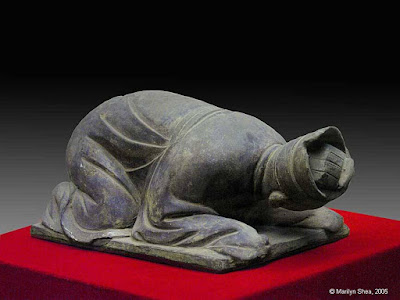 ‘Not by Reason Alone’ seems to be the guiding principle of the Legalist- Confucian, who, as has been traditionally the case, turns the debilitating socio-psychological consequences of living in an Orwellian state into ‘culture’, and relies on cultural pride delivered by economic success as 'reason enough'.

In that, the Legalist at least has a refuge wherein s/he can continue to feel good about herself, post-perspectival lobotomisation, in the face of the thus-intellectual superiority of the western other.

I have briefly alluded to the ‘Confucianisation’ of the United Kingdom in a previous observation, but I thought a dedicated article for this would be appropriate to focus on what this entails in its core aspects.

Firstly, I must state that whilst this term has been associated with east Asian civilisation, it must be noted that one does not have to be an east Asian to be a ‘Legalist-Confucian’.  Rather, ‘Legalism-Confucianism’ should be appreciated as a system of governance that is not dissimilar to the alienation-inducing capitalist ethos, or the Protestant Work Ethic discussed by Max Weber in ‘The Protestant Ethic and the Spirit of Capitalism’.  The main difference is that with the Legalist-Confucian social structure, the family unit and traditions play a key part in maintaining the entire society.

Briefly, a ‘Confucian’ society is quite the misnomer.

The term, ‘Confucian’, is the terminological sleight-of-hand used by elites running ‘Confucian’ societies as it distracts one’s attention from its underlying government-enriching ‘Legalist’ foundations that actually determines which aspects of Confucianism are relevant for the support of Legalist agenda. Hence, it would be more accurate to term such societies, Legalist or Legalist-Confucian societies.

...in essence, believes that humans are naturally selfish creatures; ought to be controlled by a system of reward and punishment; and that people are generally a ‘means’. The pervasive notion underlying Legalism views government as the business of the elite or professional politicians, and which, as a corollary, requires blind AND unquestioning subservience on the part of the population who would 'leave the thinking to the professionals' so that the people can get on with just making money.....which basically means that their 'professionals' can get on with overcharging them for anything, from Chicken Rice to Medical to governmental salaries.

But Legalism is not without its pragmatism. It does realise that the minimum that is required from a government is the provision of an economic milieu wherein the people can meet with varying degrees of economic success.  However, how this diverges from western civilisation is that the people are not allowed to expect this at governmental expense by way of welfarism, unions, demonstrations, or any efforts to extract resources from them that cannot be acquired via ‘self-help’ strategies.  That is where 'legalist-confucian', or Chinese-style 'harmony' comes in to ensure that one leaves social evils alone, and just spend their time working around it.

...can be appreciated as the supportive or 'moral' mechanism that trains the people at the popular level to be accustomed to the overarching Legalist ethos. For instance, it stipulates ‘cultivated’ proprieties promoting subservience to authority at all levels from the familial to the social and work arena.  Learning to be subservience starts at home.  Unquestioning traditionalism, conformity and uniformity are some of the key aspects of this popular culture that in turn serves to prepare the individual to not deem anything amiss in the face of their 'leaders' from school, to the military, to their employers, and to their governments.

The third and essential component of ‘Confucian’ societies is that of Taoism and other supernatural, spiritual, or cultural implements that enable the population to complement their economic aspirations and politically impotent condition with vicarious efforts at ‘self-determination’.

For instance, good luck charms, symbolism, feng shui, lucky numbers/words, Tai Chi, Qi Gong, gambling, amongst a host of others serve as compensatory, recuperative and self-determinational devices which comprise the self-help ethos of ‘Confucian’ societies that serve to undermine political and collective pragmatism amongst its victims.

...are marked with empathetic and intellectual decrepitude as, on the one hand, people can’t afford to be empathetic as they have to contend with top-down financial demands in their personal lives.  Hence, unquestioned top-down pressures are contended with via opportunism, mutual alienation and apathy.  Thus is the top-down view of people as fodder for self-enrichment is popularised.  The government takes on such an attitude and uses people, and people whom are thus used, are forced to use each other, and in time, take on the attitude.  And that is how such a society is perpetuated.

As popular empathy has a way of evolving to politically expressed empathy, and as this has been frowned upon by Legalist governments for more than 2 millennia, the evolution of culture within such societies necessarily led to its being confined to the family unit, secret societies, and other close friendship circles.

With such mutual alienation within such a 'society', it is not surprising that, for instance, the Chinese New Year sees gambling as a traditional pastime where monies are extracted from one’s ‘friends’ and ‘neighbours’; or people pushing against each other to be the first to place their fortune-inducing joss-sticks in temple urns at the stroke of midnight; prayers for luck and fortune; reliance on lucky numbers and zodiac animals to bring in the wealth; giving of oranges that symbolise gold; amongst others.

Whilst some of these practices may seem ‘exotic’ or ‘quaint’ to the culturally magnanimous, or uninformed western eye, it comes at the price of not appreciating the Legalist foundations for these practices and its evidencing popular political dysfunction for which there is no simple blue-pill to raise it to the level of a proper empathetic humane society.

That is how popular and democracy-inducing empathy is relegated to the dustbin of ‘That's western culture not ours’ by Legalist societies - unless it is of fads that do not require too much thought or activism.

With the growth of ‘Asian democracy’ vs. ‘western democracy’ discourse in the east or easternised Asia amongst its 'intelligentsia' - or 'apologists for elitist authoritarianism' would be more apt - one can say that moral development amongst the victims of such societies are allowed to exist only within legal boundaries.  In other words, empathy gives way to economic pragmatism which manifests itself in terms of ruthless competition, popular mutual opportunism, and apathy.  This serves as the foundation for popular morality.

As a corollary, other cultural practices could be said to have emerged as compensatory, recuperative and self-determinational by-products that served to symbiotically maintain the system that led to its emergence. Hence, the said belief in the selfish nature of humanity can be said to be a self-fulfilling prophecy that bode well for the interests of what inevitably led to its state-capitalist evolutionary end.  As far as Confucian, or Chinese societies, or its capitalist western variants, is concerned, it is indeed the 'End of History', as what this becomes the starting point of their evolutionalry trajectory.

With time, the allegation that such states aren’t democratic is perceived as false as the people are reduced to little more than economic and self-serving units whom would have no use for the thus-defined, ‘western democracy’ and its ‘chaotic’ demonstrations, civil rights, and other ‘western’ frivolities.

It has been said that ‘Confucianism’ is not a religion.  But the evolution, or diminution, of the victims of such societies does indeed turn it into a matter of faith as difference is discounted purely on the basis of difference; thinking is left to the 'professionals'; and people keep up the faith in charms, lotteries, etc.  Like the american capitalist counterparts of the Chinese are inclined to say, 'if it ain't broke, don't fix it'.  There is no thought on how things could be improved, unless it is with regards to the acquisition of wealth, and the innovation of toys and such to keep the populace dumb and docile.

A good and recent example may be observed in quite an amusing article written by a member of the ‘PAP Youth’ of the verifiably fascist state of Singapore, or the oriental version of the ‘Hitler Jugend’, where he criticised local activists as ‘devotees of western democracy and human rights’.

‘Not by Reason Alone’ seems to be the guiding principle of the Legalist. It turns the debilitating socio-psychological consequences of living in an Orwellian state into ‘culture’ and relies on cultural pride delivered by economic success as reason enough.

In that, the Legalist at least has a refuge wherein s/he can continue to feel good about herself post-lobotomisation in the face of thus-intellectual superiority of the western other.