My first DIY e-liquid, & thoughts on a safer EVI(e-cigs) experience 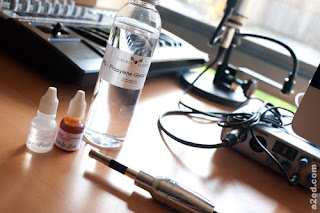 Finally made my first 'e-liquid'. Making e-liquid yourself is a great cost-saver. If you were to buy e-liquid in 30ml bottles, you will be basically paying 3 times more. And if you use e-liquid with 0mg nicotine content, you will be paying about 5 times more as sellers tend to charge the 0mg nic users the same amount as those purchasing nicotine-containing e-liquids. Talk about getting screwed.

Well, it certainly worked. For myself, as i'm accustomed to having about 3 red and 3 green chillis (those very small sized ones that deliver a nice little punch) in my lunch everyday, i'm quite alright with what thus comes across as overly-hyped, 'Diablo Loco' flavour from 'Decadent Vapours'. So now i'm vaping 0mg e-liquid which delivers just about as much as an 11mg nicotine e-liquid which is the highest i've ever tried.

My personal recipe is simple. For a 10ml bottle,

Anyway, the problem with vapers and manufacturers is that they both seek immediate gratification - like kids. Nothing wrong with seeking instant gratification, but that should not come at the price of considering and working toward alternatives. The former want to replicate their smoking experience in terms of sensations so that they got a good reason to stay off it and go for the instantly gratifying TH that comes with what seems to be extremely high nicotine content. The manufacturers want instant gratification by supplying and even promoting this for the sake of increased and immediate profit. And the third part of this unholy trinity are governments who ban the product or impose high taxes on it so as to leave their profit margin for cancer-causing cigarettes intact. Looks like everyone is operating on the same base logic here. (I've often thought this base-level, or 'generic' similarity in perspective significantly contributes to the problems people bemoan. Like I've met in singapore who complain about the Lees and the PAPs but have no problem in treating others in a similar manner.)

What manufacturers ought to do is to try to create various blends of e-liquids that increase the TH without nicotine content, and price 0mg e-liquids far below those with nicotine content. Something like people choosing alchoholic drinks in pubs over coke or OJ because they are priced similarly. However, as capitalism places profit as paramount over all considerations, i wouldn't be surprised if this is not being done as they hope for the increased nicotine addiction amongst vapers to generate profit indefinitely. And dumb consumers fall for it yet again. Everyone is too busy being educated into being good workers as opposed to intelligent human beings, and it seems that we are already at a stage where the two are confused for one.