A new comic series has hit the stands in the U.S. and the U.K. Spider-girl, starring Anya Corazon, a Latina - good, superheroes don’t have to be ‘white’ to be able to jump over the moon anymore.

But I have to wonder after people who think that everyone ought to be represented whilst not wondering if this is nothing but an assimilation strategy, or amounts to the same thing.

As i’ve stated before, ‘bitch’ is simply ‘man’ spelt with a b-i-t-c-h. They are simply doing the ‘man thing’ with girl things, if you get my drift.Looks like men defined what a ‘super-hero’ was supposed to be given their aggressive, egoistic, and self-absorbed tendencies - further reinforced by the socio-economic status quo - and then women were thereafter slotted into this spandex-mould. So we have equally heroic women, equally villainous women, all adopting strategies not unequal to those adopted by men since Spartacus, ‘Troy’, and given their ‘assets’ and men’s weaknesses, a touch of Delilah thrown in. Yeah, the outfits may be designed for women, with appropriate-placed protrusions and indentations, but it seems to be wholly stitched up by men. You could say that Anya Corazon, given that she is being fitted into an essentially and historically male persona is, hence, nothing more than a ‘cross-dresser’. 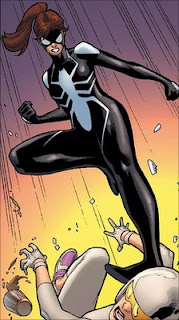 So no, i don’t see this as an egalitarian move. Certainly an assimilationist one. Ever since the ‘Spice Girls’ ‘girl-power’, or rather, ‘bitch-power’, the female version of male domination has increasingly been popularised. Ever noticed how more girls are dismissing the contradictory views of another with a ‘whatever’? It reeks of the juvenile and egoistic arrogance of men. I would liken it to Orwell’s ‘newspeak’, where reducing the number of words and vocabulary leads to a more superficial appreciation of reality - and hence render people more susceptible to the manipulative machinations of the elite. As i’ve stated before, ‘bitch’ is simply ‘man’ spelt with a b-i-t-c-h. They are simply doing the ‘man thing’ with girl things, if you get my drift. I wrote some time ago about purse-strings and g-strings, and how the former once served as the tether which men used to lead women, whilst the latter is now used by women to lead men. The tools may be different, but the persona is none-too-different. Think about it.

And what’s with the new spider-girl having a ‘Twitter feed’? Sort of reminds me of those tales of telephone (heterosexual) sex-chat lines being ‘manned’ by transvestites and sweet old ladies with a vivid imagination.

“Modern-day Spider-Girl has her own Twitter stream run by Paul Tobin, with occasional help from his wife. He admits that as a 44 year-old man, "it can be hard at times" to put himself in the shoes of a 16-year-old girl.”

A bloke writing a story with female characters is one thing. We can forget about the author and focus on the story. But actually communicating with the character through Twitter, et cetera, as if they were real; and a female superhero being represented by a pair comprising a man and his wife, occasional or otherwise - which basically turns Anya into a transvestite - is more of a twist to the tale than any that might appear within the covers of any comic book every produced.

It seems that people are so accustomed to living vicariously through ‘celebs’, actors, singers, talk-show hosts, ball-kickers, stick-swingers - and not forgetting the latest Nintendo ‘Wii’ or Xbox’s ‘Kinect’ - that they are actually able to communicate with an imaginary character in real life and get a kick out of it. I can expect it from children who have their pictures taken with Mickey or Minnie Mouse in Disneyland, but from people of voting age? Besides spider-girl being ‘more man’ than most men that I have encountered, and thus contributing to the assimilation of all ‘women’ to the male ethos, this, paired with advancements in ‘vicarious living’, just serves to fundamentally ensure that the exploitative-cum-domination spirit of patriarchy lives on in both female and male form, whilst both are rendered impotent enough from vicarious-living to just do as they’re told by the elite and leave the living to the stars and animation on the screen, or print.