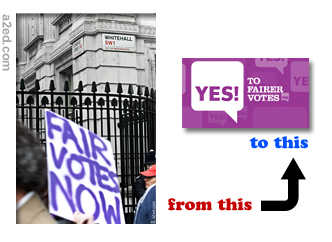 As i’ve stated in a previous article, the UK’s ‘Take Back Parliament’ movement has become nothing but a farce. In brief, on the one hand they want PR, or ‘Proportionate Representation’, they do not bother about minority parties - and hence their support for the AV, or Alternative Vote, system. I had joined up with TBP and joined the first demonstration in 2010. But thereafter, it seems that the Lib-dems, or Lib-dem supporters, or Lib-dem infiltrators, swayed the movement to supporting the AV system which wouldn’t disadvantage them, but continue to marginalise minority parties. Thereafter, TBP moved from the cry, ‘Fair Votes Now!’ to ‘Fairer Votes Now!’. What a joke. Hence, the TBP can kiss my socialist ass, along with their entourage of celebrities like Billy Bragg and Eddie Izzard whom TBP is using to get celeb-worshipping idiots to sign up with the Liberal-Con agenda through the TBP.

My main problem with AV is that it is further training the people to ignore minority parties and turn them into NGOs. If we implement AV now, we are going to have to see how that turns out in the next elections. That is close to 4 years time. Then perhaps a trouble-shooting process to refine it for the next elections. That’s another 4 years. And then see how that turns out. Another 4 years. With minority parties perhaps seeing less people bothering with it, isn’t this going to serve to underdevelop minority parties further? Isn’t this going to be training the public to simply ignore them and focus on the main parties?

Some idiots in the TBP state that demanding real Proportionate Representation, that doesn’t marginalise minority parties, is a ‘radical’ move and people should just stick to voting for AV now. Is this ‘Taking Back Parliament’ or ‘Taking Back Parliament a Bit’? The movement to the current voting ‘first past the post’ system to PR is not really a ‘radical’ move. A movement from a system where the masses don’t have the right to vote to universal enfranchisement can be considered a 'radical' move. But what we have here is an effort to refine a generally acceptable system. I don’t see why some might deem it a radical move, unless they’re working for the Lib-Cons.

Check out the following video (shot by ed)...you won't see anyone totting a placard reading 'Fairer Votes Now!' That was a movement I believed in, not the present one.


The following is an exchange between myself and the TBP.

This month a crucial decision will be announced in Manchester which could affect the fate of electoral reform for a generation.

In just a few weeks we'll find out who the next Labour leader is - and just how committed that leader is to renewing our democracy.We're going to need a united front to win this referendum on AV.

We're going to need people of all parties and none standing up and telling the political class that it's no longer credible to spin us a yarn of the 'new politics' when we don't even have a fair vote.

Manchester is the location for the Labour Party's major annual conference and I am inviting you to join me in turning Albert Square purple on 28th September at 6pm. We will gather with banners and placards to demand that the Labour leader stays true to their commitment to fairer votes.

http://www.takebackparliament.com/manchester
The Labour leadership candidates have made some promising noises so far, but certain interests within the party are urging them to abandon the cause of reform and sit out the referendum in the hope that change will be defeated. We can't allow the same tired voices to prevail.

Join us in Manchester to demand a commitment to campaign for a Yes vote from the future Labour leader:

http://www.takebackparliament.com/manchester
There are already many reformers in Labour making the case for ditching our broken voting system. Together with them, let's show the future leader our strength of feeling.

We did it all across the country in May and it made a difference. We can make a difference again. Whether you are a Labour member or just someone who cares passionately about the need to change our
politics - I hope you will join me on the 28th to show some purple solidarity.

Come to Albert Square in central Manchester, bring friends and wear purple.
Let's take the last ever tactical vote - and win this referendum!

All the best,
Billy Bragg

How is 'AV' 'Taking back parliament'? Minority parties are still marginalised aren't they? That's the key point isn't it.

Correct me if i'm wrong.

Take Back Parliament believe the people should decide what system of voting they should use and that the referendum on offer was a typical establishment compromise. We are sympathetic to our supporters concerns that a referendum on PR It's estimated that if the previous elections had been carried out with an AV system, then there would have been more MPs supporting a further move towards Proportional Representation (PR).

Our end goal as a coalition is proportional representation. In our initial consultation of supporters 8 out of 10
said that winning an AV referendum would be an important stepping to more radical reform in the future. Whatever happens with the AV referendum we will continue to push for a fully, proportional voting system as the end goal of the campaign.

But having said that - we must work with circumstances as they stand, and if we have to change the
system piece by piece as Emmeline Pankhurst did with the suffragettes, that?s what we will do.

We're all having to compromise on this now so that we have a clear direction. I hope you can join us in compromise, knowing that our final goals are the same.

We hope that you'll come to support AV, as many other small parties are, who are currently marginalised.

Thank you very much for your comprehensive response Haneef.

I do see your points. In consideration of which, i have to wonder if those whom are brought into power through AV are going to want to change the system that brought them into power, and especially if it advantages minority parties at their expense.

Additionally, I wouldn't consider the Emmeline Pankhurst analogy as relevant at all. Not logically anyway. That was a time when women were fighting for the right to vote, equality, etc. They were seeking a movement from an extremely inegalitarian patriarchal system that disenfranchised, say, a half of the population. In the case of the electoral system at present, we are not seeking a move from an absolutist monarchical or patriarchal state to universal enfranchisement. Rather, we are seeking progress with regards to the details of a generally acceptable system. Hence, agitating for PR is not as radical a step as would be the agitation of universal enfranchisement in a monarchical state, or a patriarchal one. We were fighting for a significant number of the population then. Now, we are fighting for a political minority. AV, however, is generally a fight between the supporters of the majority parties - its a clash between the 'haves' and doesn't consider the 'have nots'.

We don't have to 'work with circumstances as they stand'. Circumstances stand as they are on our motivation or lack of. Unless it can be said that the majority of the people in this country aren't for PR, there is no reason why we can't move for PR now. The 'radicalness' of a move is not determined by the degree it raises the hackles of the servants of the people, but the readiness of the people for it. If the latter is true, there is nothing 'radical' about it. I don't see what is so 'radical' about including a simple 'PR' option that accords equal advantage to minority parties in a referendum. Let the people decide. However, supporting AV NOW and PR in a decade or so isn't giving people a choice. In the event of a referendum, i want the choice of PR.

Oh, btw, with regards to Billy Bragg's circulated-via-email viewpoint, it doesn't especially matter to me what Billy Bragg has to say. I like his music, but, he is, after all, just a singer by profession and has no business leading the movement in any significant capacity unless it can be shown that he is far more insightful than the 'nobodies' amongst us. It's only the points that matter, and i would prefer to receive perspectives from 'nobodies' with greater insight than risk limiting my exposure to insight to the radius of the limelight cast on this or that overpaid and overhyped celeb in this celeb and fan-ridden world. The world is in trouble when mere singers, like Billy, takes the limelight over the Marxes of our times. There were certainly such singers as Billy during the time of Marx, but people weren't as stupid as they are today to think that a mere singer can be even a 100th as insightful as a philosopher despite the latter not accompanying her/is thoughts with a tune.

Finally, I am very well aware of how evils are perpetuated or prolonged by the time taken to eradicate it. People tend to develop a host of compensatory and recuperative strategies to put up with less than acceptable situations. Their degree of success in formulating these determine the degree to which the evil situation is perpetuated, their personalities diminished, and their future apathy or/and oversights developed.

Thank you for your response Haneef. Whilst we learn from the methods and perspectives used by the egalitarians in history, we must not use the time taken by them to bring about change as an excuse to take as much time unless we can prove that the conditions are the same. The conditions then vs. now do not support such a piece by piece approach. Whilst it might take more time to storm the citadel, it does not take as much time to include others in it. We are at the latter stage.

Now, instead of just circulating some celeb's thoughts, or other pro-AV ones, why not circulate something like this. Now that would be giving people a choice don't you think. If not, the TBP is simply 'gate-keeping' and 'agenda-setting'. I accept that it is required to get things done, but not when it compromises the consideration of what ought to be done. From quite early, I have seen how the TBP site has been channelling the focus of its denizens through what was being said, and not being said.

No response to the above is necessary. I just thought that your efforts deserve an effort on my part.

Have a nice weekend mate.