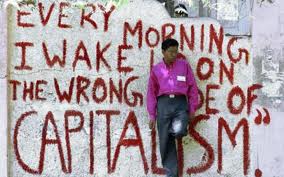 (A tiny portion of the following was placed as a comment on a Google forum featuring complains about Blogger's 'save template' function in the back-end not functioning since yesterday - and which explains why my favicon in my art site is not functioning.)

Well, that's the thing about capitalism, the richer you allow the fat cats to get, the more they're going to own your means of expression, subsistence, aspiration, and motivation. S/he who owns the means of production, does not only own your means of subsistence, but owns all of the above as well. It is that which enables them to determine the evolution of the human persona.

A company being completely answerable to you is dependent on your owning it. The same thing applies in the case of 'democratic' governments doesn't it. Why do people expect to 'own' their governments and not their companies eh?
Your condition cannot but get worse until you degenerate enough to think it normal and natural - as do most these days. I sometimes look at the people of a 100 or so years ago and cannot wonder how they wouldn't put up with much the people in these 'modern' times put up with. Well, for starters, they weren't stupid enough to make celebrities and millionaires, or billionaires, out of actors, singers, ball-kickers, talk show hosts, etc. The Spice Girls and 'Lady' Gaga would probably have had to work as prostitutes to make a living - which would be more virtuous considering that they would really have to work to make a living as opposed to making millions from wiggling their posteriors, singing rubbish songs. These bitches don't 'empower' women mate, they simply channel the potential power of women down meaningless and self-absorbed channels so that they might make bitches out of men - as men did out of women in the more patriarchal past.

And look at Britain's 'Labour' government compared to the Labour of the past. Compare their Clause IV as written by Sidney Webb to Blair's rewriting of it. And look at how people discount as 'academic' or 'psychobabble', or intelligence as 'geeky' when the democracy and technological advance they enjoy now was dependent on people being open to, or doing and becoming these in the historical past. They are undoing and discounting all that founded their civilisation, and bemoaning the evils that emerge as a consequence. They are allowing the elite to monopolise scientific thought and dominate them as they have allowed the capitalists to monopolise human's resources and dominate them. Stupid isn't it.

Companies. Don't own it, and they will own you. Perhaps this 'downtime' with the Blogger template is just an exercise to show you 'who's boss'. They do that sometimes as it's good to engender just the right amount of helplessness amongst the people so as to render them more manipulable and thankful for small mercies.