Is it ok to rip your DVDs? 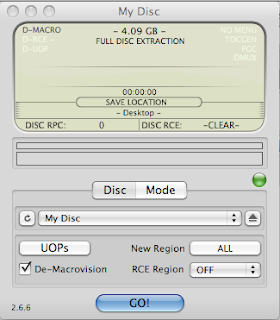 Well, according to the warning messages that come up on DVDs, it is. According to common sense, or a more developed sense of justice, I, sometimes, think it is not.

Imagine, for instance, that you’re moving to another country, or going abroad for a bit, for a work, or leisure, or to get away from the mass stupidity in your home country. What next? Pack a couple of luggage with your DVD collection? Or rip it and stick it on a drive small enough to stick in your pocket?

And if you don’t mind lugging your DVD library with you, what about region codes in DVDs that makes it unplayable in another region - designed to make you buy copies of the DVD whichever part of the world you go perhaps? That is a reason why i didn’t buy the Xbox or its other variants as i was told that i would only be able to use it in singapore? What?! So i have to buy another in the UK? Shove that. We aren’t supposed to make copies, but are supposed to buy copies wherever we go? Ridiculous logic don’t you think.

And how about the quality of DVDs. What if they erode? Are we allowed to purchase another movie DVD at the cost of an a an empty DVD since we already bought it once already? Why aren’t we allowed to return the original and eroded or damaged DVDs and get another copy from the producer? Do we have to purchase the contents (the movie) again because the package (the DVD) is damaged?

I sometimes wonder, if ‘piracy’ is just a term to enable top-down piracy to continue as it has throughout the ages.
And another thing that has bothered me for quite some years now. Turning ‘stars’, i.e. actors, etc, into millionaires. I’m not comfortable with that. So buying additional copies of DVDs in whichever country we’re in just adds to the coffers of the media conglomerate, and also enables the so-called ‘stars’ to afford all that glitz and glamour - as might be afforded those statues of Gods and Goddesses in temples - so that the people will have all the more reason to worship that might in other times be considered a ‘mere entertainer’.

And its not like we aren’t getting screwed the moment we buy a DVD of a so-called ‘blockbuster’ or ‘box-office hit’ or ‘Academy/Oscar winning/nominated’ movie. They hold back scenes so that after the DVDs have been sold, they can release ‘extended’ version for the public who really love the movie and have to see these scenes. It’s like being sold a book with a few chapters ripped out so that it can be resold again with the chapters intact.

So, I sometimes wonder, if ‘piracy’ is just a term to enable top-down piracy to continue as it has throughout the ages.

This brief observation is not purposed to encourage piracy, but to question after how its definition might be an effort to enable piracy to be practiced by only a select and elite class of people, and at the expense of everyone else.

This is the paradox that significantly founds our ‘modern’ times. Those whom are able exploit others by such legal means are those whom are above the law even whilst abiding by it. They will respect these laws themselves, whilst owning the resources to make more out of it at the expense of the masses, and using the profits to acquire even more. But the duplicity of it lies in not all of the masses being able to do likewise.