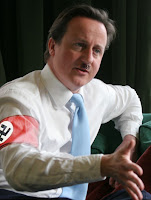 “The prime minister has called on the nation to "get on and have fun" on the day of the royal wedding, urging Britons to organise street parties.

On Monday, Mr Cameron will travel to the north of England, with wife Samantha, to promote street celebrations.

He says 29 April will be a "chance [to]... celebrate the great things about our country" - bbc.


What ‘great things about our country’ is Cameron talking about?

Something tells me that this Cameron is a ‘Nazi scum’ under his seemingly egalitarian demeanor. Not too long ago, he spoke against multiculturalism - bbc. Now, he’s encouraging street parties to celebrate a ‘great thing about our country’. Look at the use of the word, ‘our’ in this instance, and his presenting non-English culture as foreign and alien in his speech against multiculturalism and you’ll be able to see what his brand of ‘our’ means. So it’s going to be unpatriotic to not celebrate the marriage of some ‘royal’ whilst there is nothing un-British about presenting non-English cultures as foreign and alien.

Methinks that the entire British political spectrum has been moving, gradually, to the far right. Once we see Labour not knowing its left from its right, it gives the other traditionally ‘right’ parties the excuse to move further to the right. Is it any wonder why the UKIP, Labour, Conservative, Lib-Dem, and the BNP, can find common ground of quite a few matters, if not in officially stated policy, at least in their paraphrasing each other with different words and perspectives whilst generally saying the same thing, or coming up with different routes leading to the selfsame destination?

Sorry mate, I don’t give a toss about the ‘royals’, however ‘British’ it might be. It can be ‘British culture’ for a thousand years, but that doesn’t make it right - just as ‘bride-burning‘ was wrong no matter how long it was practiced in parts of India, and which the Brits, thankfully, helped get rid of. And you can’t claim that the non-English have to abide by and adopt it just because they are in ‘our country’, because it ain’t your country mate. It belongs to all those people who invested in it via your colonial exploitation of their countries. If Ithey need to thank you, it’s only because their servant has taken pretty good care of their house whilst they were away slogging and dying for ‘king and country’. You have an equal right to this state, being English or whatever, but that’s only because, like the biblical parable, the servant has multiplied the money given to him by the master and thus rewarded with his own place in the scheme of things.

But why is this Cameron all hot and bothered about this whole ‘royal’ wedding thing.

‘Celebrities’, of the overpaid kind, also play the same function, albeit unintentionally. ‘Celebs’ and ‘royals’ are the popular arm of class maintenance. They sort of serve to give significance to the people, entertain them, make them feel good about themselves, lull them into some sort of self-satisfied stupor that makes them less critical of the class divide. But it quite the paradox since the ‘celebs’ and ‘royals’ can only grant you feelings of significance by first depriving you of it, permanently. Thereafter, they live out your dreams and aspirations and charge you money for enjoying watching them have what you can’t. Pretty sick when you come to think of it. And people believe themselves to be ‘atheists’ and ‘agnostics’ whilst falling for this. This is a religion in itself mate. At least, with the Gods of old, Jesus, Allah, Buddha, Guru Nanak, Odin, amongst others, they desire your apostleship so that you can make the most of yourself by making the most of each other. But with the ‘gods’ of ‘modern’ times, these ‘royals’ and ‘celebs’, they depend on your making the least of yourself so that you can make too much of them.

At least, with the Gods of old, Jesus, Allah, Buddha, Guru Nanak, Odin, amongst others, they desire your apostleship so that you can make the most of yourself by making the most of each other. But with the ‘gods’ of ‘modern’ times, these ‘royals’ and ‘celebs’, they depend on your making the least of yourself so that you can make too much of them.
That is when you will not be as pissed off with the economic arm of the elite (the elite comprises the economic, political and popular sections). You see, if you have already been disabled from taking issue with the privilege of the popular section of the elite, i.e. the ‘royals’ and the ‘celebs’, you will have been generically disabled from taking issue with the class system altogether. That leads to your not viewing the class system as the main source of evils. That is when the British might become stupid enough to subsidise the elite with 74 million pounds on ‘red nose day’, or keep up with their charity appeals, or donate to them, amongst a host of other social evils cooked up to address the overarching, but whitewashed, social evil that is the class divide.

Wow! That is the meaning behind Cameron’s promotion of street parties for the so-called ‘royal’ wedding? Yep. That and more. But if I’m going to sit here and do the rest of the thinking for you, you aren’t going to become smart enough to deliver yourselves from this rubbish. So I’ll leave the rest of it to you.