Is it fair to fine fat people for not dieting? 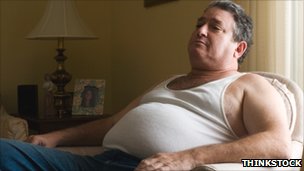 “Overweight welfare claimants in the US state of Arizona face paying $50 (£31) fines if they don't follow a dietary regime laid down by their doctor. Is that fair?” - bbc

Fat people fall into 2 categories. Those whom have some medical condition, or medicine-induced condition, that causes them to be fat, or should we say, ‘slim-challenged’, size 10 and below-challenged’.....

The second category will include those whom love to eat, but don’t love to exercise; or aren’t able to last more than an hour, on top, in bed.

So if anyone should be fined, it should be the latter. But then again, that’s not right either.

Let’s not forget that the fat are feeding the economy as they are feeding themselves. So it’s the capitalists behind all those fancy ads for snacks to burgers and pizzas whom are profitting from the populace’s expanding waistline. So if you wanna fine somebody, go fine those buggers.

Exercising is like masturbating. You get relief, but the capitalist gets nothing. Indulgence, however, lines their pockets with huge profits.
And if you really want to fine all those whom are responsible for both women and men having the luxury of being able to rest their chests on their bellies, and their chins on the chests, you can also fine all those celebrities whom thrive on us living their sexy and adventurous lives vicariously whilst couched on a couch. And also those whom profit from the entire capitalist system for keeping people at work and having little time for anything else other than trying to make life more exciting by living by their fridge.

Oh, i can go on and on picking out the many causes for people’s booming waistlines, but the point here is we have to question after whether we’re blaming the victim here. It’s not just ‘a matter of choice’. It’s a matter of how profit is being generated by the manipulation of choice. If ads don’t work, why have them? Let’s not forget that the ‘freedom of choice’ has the ‘manipulation of choice’ as its shadow. When the latter is not true, then, yeah, fine the fatties out there, But if it is true, than we’ll have to look at preceding causes.

If anything, fatties, smokers, boozers ought to be given more privileged treatment. They pay greater ‘insurance’ by what they consume than the average gym-membership totting vegan.Singapore’s ex-premiere, Lee Kuan Yew, some years ago said that the state ought to charge smokers more for the burden they place on medical care. He’s a smart guy, but his arrogance does get the better of him at times leading to such rubbish reasoning. The same logic, as i applied in that case, can be applied here.


If anything, fatties, smokers, boozers ought to be given more privileged treatment.

They pay greater ‘insurance’ by what they consume than the average gym-membership totting vegan. Exercising is like masturbating. You get relief, but the capitalist gets nothing. Indulgence, however, lines their pockets with huge profits. So whom do you think should be bearing the costs here eh. People indulging in food, ciggies, booze, and quite a lot of other such vices, the capitalist gets all that money, industries boom, investments are made in quite a lot of other industries, other industries boom, and so on and so forth. Without indulgence, without some of the ‘7 deadly sins’, profit margins would be more constricted than a skinny nymph in an even skinnier bustier. How much do you think the capitalists are going to make with a person's month's membership in a gym compared to another's month's supply of booze, ciggies, and snacks eh.

I'm not extolling the virtue of indulgence here. The capitalists already do a good job when it comes to that. What I'm saying here is that if the corporate conglomerate want the people to pay for the consequences, they ought to consider what consequences they are generating via what they are promoting.

Alright. Go think about it.