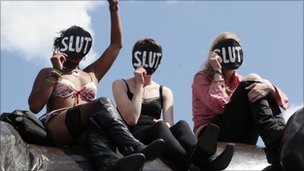 "Men in hard hats paused from digging up Piccadilly to watch in stunned silence as the provocative procession marched past.
They would not have dared to wolf whistle as women in stockings, bras and basques passed, clutching banners with statements like "cleavage is not consent".
The women were among the up to 5,000 people organisers say took part in the UK's latest Slutwalk in London on Saturday.
The protest movement was sparked by a Canadian policeman who advised students to "avoid dressing like sluts" to avoid being victimised. - bbc"


Awww, come on my dear sluts, don’t blame the men too much please. After all, it wasn’t too long ago that only prostitutes dressed like you. So when you go wiggling your ass and tits about like some 10 penny whore like those whom might whilst plying their trade along the streets where Jack the Ripper hung out, it is going to take some training before men learn that ‘if she looks like a whore, walks like whore, quacks like a whore’, she might not be a whore.


What these chicks are basically doing is expanding the domain of ‘girl power’.

“I may go to a hotel room with you but i can still say no.”

“I may dress like a whore but I can still say no.”

“We may be married, but i can still say no.”

“I might spread my thighs, and you may be half way in, but i can still say no?”

“We might have been doing it for over an hour, and you are at the point of ‘explosion’, but I can still say no....since I already ‘came’ before you”?

There is a fine line between ‘the right to say no’ and the ‘effort to dominate and control’.

You’re damned if you look at a woman’s tits when you talk to her, and deemed to be ‘gay’ if you don’t.
Frankly, I’m completely against rape and don’t even put myself in a position where the women might say no. My approach toward sex is that the woman has to say yes even before I think about asking - and that’s the way it’s always been without exception. I never ‘come on’ to women. I treat them with the same respect I accord men - provided they deserve respect that is. And if they want ‘it’, they’ll have to ask, and i’ve said ‘no’ more times than i’ve said ‘yes’. Hell! Even prostitutes have offered themselves to me for free, and i’ve still said no. Not many, but it has happened a few time to be honest. I suppose it is the respect I show them as I treat them like human beings despite their their ‘beauty’ or their femininity - unlike all other men whom i’ve associated with whom either come on desperately, or treat them like royalty just because they’re women.

What we have here are two extremes. On the one hand, the lust of men are taken as the norm and some women are made to put on Burkas. And then we have the other extreme, like those French idiots, who’d rather their women dress like whores than put on a veil or hijab. In the former situation, we have men dominating women via the burka instead of tying their dicks in a knot. In the latter, it is fast becoming a situation where women are dominating men by making sure they inspire erections in men, and then expecting them to tie their erections into a knot and control themselves. Quite hilarious, I think.

We can’t just look at the supportable anti-rape/molestation message of such movements without taking on board the fact that sex is increasingly used as a tool to dominate men. It is used as ‘bait’, and then the demand that the bait isn’t swallowed till the woman says so. That just leaves you ‘hooked’ for life.
In the case of women’s ‘rights’ in the western world, and all those aping them, they are not just fighting for their ‘no’ to be respected. They aren’t just fighting against rape and molestation. Rather, they are using these instances to fight for an overall right to dominate men sexually. They are playing the ‘carrot and stick’ game with men so that their bidding might be complied with without question. Haven’t you seen those movies where some ‘hot’ woman walks into a bar and gets everything on the house through the admiring men? Haven’t you seen that one episode of Desperate Housewives (one of my favourite American TV series) where Edie and Gabrielle have a contest to see who can collect the most swizzle sticks - get the most drinks from men? Haven’t you seen movies where the woman, dressed in an ‘uplifting’ low-cut top, talks to a man and demands that he give her the respect of looking at her face and not her tits when talking to her? What do you think that is all about? You’re damned if you look at a woman’s tits when you talk to her, and deemed to be ‘gay’ if you don’t. And if a man was to dress like a slut, he's deemed to be 'gay', in other words, beyond female control, and discounted. That is why women tend to go for sloppy male dressers. No competition that way.(frequently the case amongst Chinese women in contemporary singapore, as opposed to Chinese women in the singapore of the 70s and 80s.)

I have no problem with, and fully support women’s right to say ‘no’ in the face of the rapist or molestor. But I do have a problem with women who demand respect as more than a pair of ‘tits, ass and pussy’ when they accentuate nothing other than that. That is nothing but an effort to get you to focus on them sexually, and than once your reduced to a throbbing dick, cross their legs until you do their bidding. That is sexual domination of the Slutriarchal (as opposed to ‘patriarchal’ or ‘matriarchal’) age. I’m not saying that the woman’s right to say ‘no’ shouldn’t be respected. What I’m saying is that such women should be recognised for the domineering twats that they are and not been given the attention they crave, and through which, they seek to dominate. I’ve seen too many men in the movies, and in singapore for instance (mainly Chinese men) who fall for it, and are led by those nose by their wives, mistresses, and those ‘beer ladies’ who get men to drink more by pouring their beer for them. (mainly Chinese men again. Indian men, half the time, tend to tell the ‘beer lady’ that they’ll pour it themselves and send them on their way, whereas Chinese men are thrilled by the company of these short-skirted women. You can see that for yourself if you’re in singapore. Hilarious.)

when women got the right to vote and say ‘yes’ or ‘no’, the tables turned, and their sexuality turned from the price paid for security to securing men for an unlimited price.It is in this overarching context that we ought to appreciate the significance of ‘Girl Power’ and ‘Slutwalk’ marches like the above. We can’t just look at the supportable anti-rape/molestation message of such movements without taking on board the fact that sex is increasingly used as a tool to dominate men. It is used as ‘bait’, and then the demand that the bait isn’t swallowed till the woman says so. That just leaves you ‘hooked’ for life. Check out the 'music' vid below to appreciate this overarching context i'm talking about. What do so-called 'feminists' have to say about that eh?

But the point is that it is used as bait in the first place. Do you actually think women are going to dress like sluts in a post-apocalyptic world where some raging virus has wiped out all heterosexual men and lesbians? These are ‘attention-dependent’. These women do it to get attention, privileges, and control, amongst others. This was not the case in the patriarchal periods of the past where women didn’t have a right to vote, engage in the same professions as men, or become ‘the devil with a Prada’. But when women got the right to vote and say ‘yes’ or ‘no’, the tables turned, and their sexuality turned from the price paid for security to securing men for an unlimited price. It is a highly paradoxical situation where their sexuality is used to get what they want, whilst their right to say no keeps the men saying yes to their every whim and fancy. There are a host of examples to support this, like men still buying their fiances diamond rings for instance - i’ll talk about that in another article.

In our efforts to move toward an egalitarian society, we ought to consider how the quest for respect might lead us to dominate those whom have historically dominated us and have inherited weaknesses from the previous era. It may be poetic justice, but far from just it most certainly is.
In the final analysis, the right to dress like a slut in order to not be victimised is increasingly being paired with the unstated right to victimise men by dressing like one. There is a fine and overlapping line between the two. This is quite a dangerous game that such chicks are playing. They are relying on getting men horny enough to do their bidding, whilst attempting to ensure that the beastial lust of men doesn't reach the point of rape or molestation. A case of spreading your legs and reserving the right to say no before penetration. If these sluts have their way, we would have, thankfully, banished rape and molestation, but, regrettably, condemned men to female sexual domination. You'll have to be the sort to not think with your dick or your tits to appreciate this point.

In our efforts to move toward an egalitarian society, we ought to consider how the quest for respect might lead us to dominate those whom have historically dominated us and have inherited weaknesses from the previous era. It may be poetic justice, but far from just it most certainly is.