To all new foreigners in Singapore: You ain’t parasites, the locals are 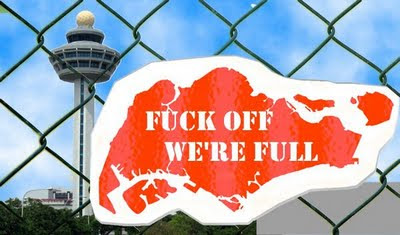 The following is a statement extracted from a previous article by ed. It has been elaborated upon and given its own standalone status as an article for its significance. There is no progress without critical introspection. Only compensation via the victimisation of others.


To my dear New foreigners,

So long as you're paying taxes (through GST, ERP, COE, the interest accrued by the government on your CPF contributions, etc), or contributing in a positive aesthetic, cultural, intellectual, social way to the country, the allegation that you foreigners are 'parasites' is illogical and, well, downright retarded.

In fact, it is far more logically supportable to allege that it is the locals whom are 'parasites' as many are profiting from, at times, cheaper, or highly skilled, foreign labour. They are increasing their profit margins from the labour, skills and intelligence of foreigners whom have acquired their abilities at the expense of a foreign clime and culture, and haven’t enjoyed local 'subsidies' or the culture of 'consumerism, gluttony and gambling' for their development (not applicable to china nationals whose entry is eased due to the government’s pro-’we have to maintain a chinese majority in singapore‘ racist policy.)

Just in case the local Confucianised 'native-born' idiots (regardless of race) didn't get it, it means that ‘another state contributed to their development, and then they come to singapore and make singaporeans more money lorrr (chinese slang for 'you see'. Tio bo?('understand?' in the Chinese Hokkien dialect)’. So if anyone has more of a logical basis to call anyone ‘parasites’ in singapore, it is the new foreigners whom have it.

I'd like to see how any of these xenophobic cretins are going to argue against that.

And let’s not forget that the stupidity which was engendered amongst the populace of singapore with the imposition and institution of monoculturalism, via Legalism-Confucianism, and the ensuing discrimination, bred enough intellectual and creative decrepitude amongst the populace to warrant the need for ‘foreign talent‘ to get around local ‘native-born‘ inadequacy. It also bred enough self-absorption, apathy and a grossly opportunistic and exploitative character amongst the people for them to, amongst a host of other instances, displace local labour with grossly exploited manual foreign labour, i.e. maids, construction sites workers, etc.

The ‘native-born’ chinese had their hey day with the aid of discrimination and governmental favouritism, and now its time to pay up for the consequences of their preceding favoured status. So let’s not be childish about it. Do a deal with the devil, and you’ll have to suffer for it when your time’s up mate.

I shudder to think that if we do not change our mindset, egalitarians globally might find it impossible to be against xenophobia and racism without simultaneously being against the chinese (not for the race, but for their being socialised victims of the Legalist-Confucian perspective). We should not allow it to come to that stage with the combination of xenophobia, racism, and apathy. Focus on bringing about the minimum wage. You'll find that that solves quite a bit, whilst countering the exploitative character engendered by the imposition of China's culture in singapore.