Is singapore a tyranny, or are people to dumbed down to feel it? 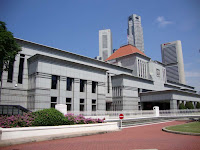 The following is a consideration of the perspective posted at the site, 'article14'. The site, in discussing the so-called 'Black Sunday movement' whose members wear black and congregate at Starbucks - perhaps they have an unstated desire to boost Starbucks sales of overpriced beverages, or perhaps Starbucks is paying for their black garments...silly people - to express their support for the freedom of expression - brought up certain points that seem to be commonly held by the 'singaporeans' of today.

"Let's face it. We lack freedoms in Singapore. But, we do not suffer under the yoke of tyranny in the same way that some have suffered in other places and at other times."

You write well, but your logic in this article is severely flawed. You should consider how the absence of particular freedoms over the decades have led to enough underdevelopment amongst the people for them to not feel the tyranny.

With chinese pastimes such as eating, superstition, and gambling, and singaporean pastimes such as shopping - and with these turning into 'national pastimes' - wouldn't that indicate that the people have degenerated to the point that they do not hanker after more? - for the chinese, this degeneration took place in the year 221 b.c. with the imposition of an Orwellian state (Qin dynasty onward). Hence, it is not surprising that people would generally think that singapore isn’t too bad.

If the UK had a government like the PAP, there wouldn't just be a public uproar, there would be riots across the country as well. They would view it as nothing short of a fascist neo-nazi tyranny. Even the BNP which did far less, and weren't even in government, had to face aggressive and egg-pelting opposition from the public. It's not only the Saddam-style governments out there that are deemed as tyrannies. You should ask yourself how much people in singapore have degenerated to the point that they do not feel the same way.

And another reason, an extremely significant one, why the people might not generally feel that it is really bad, is that they have become like the government themselves. It is inevitable. One of my mates whom i've known for more than a couple of decades, and whom frequently complains about the exploitative attitude of his bosses or the government, when asked by myself why he complains about people doing unto him that which he does unto others, always remains silent. Evil is only recognised when one suffers from it, not when one afflicts it. When one deems exploitation and extortion as ‘not too bad’, or, 'it's like that one lahhh', it is because they've become similar themselves. One does not baulk reflexively at an evil when one is left no option but to become evil enough to put up with it. With top-down pressures, and no popular opposition, the people will have little option but to contend with it through feng shui, gambling and mutual alienation and opportunism.

"We have had our share of unjust imprisonments. But, these are issues about which we should voice our concerns and opinions through the media that is opening up to us these days."

So if your daddy is thrown into prison without trial, would you just stick to 'voicing concern' and writing blog posts about it that goes along the lines of

“OMG!, MY DADDY HAS BEEN IMPRISONED :( WTF! Anyway, feel like some bak kut teh tonite, anybody want to join me?”

The media should complement the activism and empathy of the people, not give them an opportunity not to practice it anywhere except in the media. If you look at history, past and recent, where people just 'voice concern', it is an indication to the government that they can be ignored. When it comes to voicing concern, keep it for late milk deliveries.

All singaporeans live under the yoke of colonial oppression, and the racial bias of the opposition and the chinese supremacist and authoritarian capitalist tyranny of the government. The government do not have to be foreigners to be of the same or worse ilk. In fact, singapore was less of a tyranny when the British were here. I’d rather singapore be a dominion of the United Kingdom than a province of China - as it is now. But then again, i’ve yet to be underdeveloped enough to feel that singapore isn’t too bad.