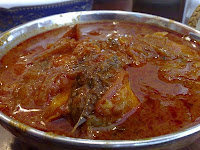 Case 1: A family, who had just moved here from China, had resorted to mediation because they could not stand the smell of curry that their Singaporean Indian neighbours would often cook. The Indian family, who were mindful of their neighbour's aversion, had already taken to closing their doors and windows whenever they cooked the dish, but this was not enough.

"They said: 'Can you please do something? Can you don't cook curry? Can you don't eat curry?'," said Madam Marcellina Giam, a Community Mediation Centre mediator. But the Indian family stood firm. In the end, Mdm Giam got the Indian family to agree to cook curry only when the Chinese family was not home. In return, they wanted their Chinese neighbours to at least give their dish a try.

Upon Governmental mediation, one of the parties suggested that the Indian family agree to cook curry only when the chinese family was not home.  This was proposed by one party, and accepted by the other party.

singapore has become a country where the aroma of a curry can be an issue, whilst enveloping the country in smoke during the 7th month festival isn't - even though the latter is most certainly a health-hazard. Singapore isn’t singapore, and the chinese, native-born or not, aren’t singaporeans.  Why?  Because they have failed to integrate with the other cultures.  Even singlish today is more of a Chinese style pidgin English rather than an illustration of the fusion of all cultures.  If it contains any non-Chinese words, they were included in Singlish in a more egalitarian past, i.e. 70s, 80s, as opposed to the present.  Singlish, by the way, is a good indicator of the degree of multicultural fusion.

To consider oneself to truly be a singaporean, or singapore as truly singapore, one will first have to show that one is a fusion of the best of all cultures found within that locale, and that singapore presents all cultures equitably in sight and sound.  Just having a figurehead non-Chinese president, if the above is not true, means nothing other than an attempt to whitewash the festering racial supremacism in the state.

That is verifiably not the case today.

amongst a multitude of other instances.

Given this, how, pray tell, and logically-speaking, can we say that the local chinese are ‘singaporeans’, unless we make ‘singapore’ synonymous with ‘chinese’?

In this context, can we be surprised that a ‘mediation’ result in the ‘curry case’ favours the ‘sensitivities’ of the chinese family.
Isn't it the same with non-Chinese cultural celebrations being kept to their ethnic enclaves? Isn't this self-absorption and marginalisation of non-Chinese difference mirrored in a multitude of ways already? It doesn’t matter who suggested the ‘solution’ or whether it was conceded to by both parties.  It just indicates the degree to which the non-chinese in singapore think it right to just give in to the whims and fancies of the chinese simply because ‘they are the majority what!’.  It shows that the local non-Chinese have bought into this racist tyrannous nonsense themselves.  Ed, being an egalitarian, never did, and never will.

And another important factor is, Singapore has done a really good job in promoting singapore as chinese.  That is why Chinese from China can come in and complain about difference with as much ease and comfort as they did in the ‘curry case’.  If they saw singapore as a multicultural state and not a chinese state, they wouldn’t dare do it.  Many Chinese from China have also refused to believe that i’m singaporean.  Is it that they’re retarded or is it a case of singapore presenting itself as a chinese state? And is their behaviour any different from the 'native-born' chinese?  Generically, non-Chinese cultures have been marginalised locally in sight and sound, via the HDB quota system, via the 'keep singapore chinese' policy, via the 'speak mandarin and promote chinese culture campaign', the 'mother tongue policy', and all the instances cited above.  So one could plausibly state that the behaviour of the chinese family in the mediation case is not atypical, but a consequence of, and a reinforcement of the decades-long status quo.

That is why, singapore has become a country where the aroma of a curry can be an issue, whilst enveloping the country in smoke during the 7th month festival isn't - even though the latter is most certainly a health-hazard.

That said, it's not that quite a few local chinese do not comment on 'the smell' of indian or malay houses because of their food. I've heard it often enough. I would have requested the chinese family to get some passion into their system so that Indian culinary aromas would go down better, or go live in chinatown.

Well, if you're used to bland food, it's no wonder that one might find Indian culinary aromas 'insensitive' to the feelings of the 'majority' .


The point of this article is not to ‘stir up hatred’ of the chinese.  (it's ridiculous that many chinese don't have to defend themselves when they are racist, but those who criticise their racism and consequential idiocy have to constantly state, 'i'm not trying to stir up hatred of the chinese'.  It shows that racism has become an accepted norm.) The majority amongst the ‘majority’ are doing a fine job in that by their oversights.  All that people, of any race, will have to do is to see things for the way they are to get pissed off, instead of being used to the way things are to to the point that they might discount it with an, ‘everywhere in the world also like that one lah’, or, ‘they majority what, of course they’ll behave like that.’

This is a call for critical introspection.  Firstly, we have to acknowledge that without the government’s racial supremacist intervention, and oppositional racial self-absorption - which is why i withdrew my support for the grossly racially-self absorbed 'opposition' for the last elections - the chinese would be truly singaporean today embodying the critical-mindedness and wit of the Indians, and the cultural vibrancy and animation of the Malays, and there wouldn’t be such a ‘curry case’ issue.  Without the non-chinese justifying it by saying, ‘they are the majority what’, the chinese might not be as self-absorbed today.  In that, even the Indians and Malays are at fault here.

But, that said, even if the Indians and Malays said something and tried to educate their friends into appreciating difference instead of just ‘tolerating’ and ignoring it, the social effects of governmental policy would have run its course.  But at least, they would be able to say that they didn’t contribute to the problem.

This is not an isolated instance.  It happens frequently enough.  And when you can prove that you are a local, they either insult you or tell you to get out of the country.  That itself is highly indicative that these 'sinagporeans' aren't singaporeans in character to the point that empathy is only shown for 'one's own'.  And this is further supported incontrovertibly by the fact that the local chinese and 'opposition' have hardly bothered about most of the issues raised here.  Are they 'Singaporeans'?  When they exhibit as much empathy for other locals as would foreigners who know nothing about singapore?  Hence, they are, in essence, the real foreigners occupying the state of singapore.