Why ‘Singlish’ is actually Chinglish 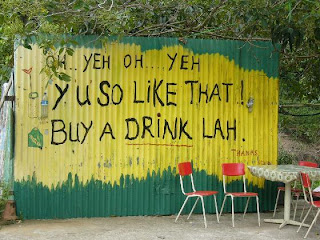 It is an amalgam of words from various languages.  Yes.  But what is ignored is that most of the non-Chinese words in the language was included in the past - 70s, 80s, and not the present.

The Singlish of today has a greater Chinese-English mix than Malay-indian-Chinese mix.

The Singlish that is supposed to be evidence of a fusion between cultures is actually an accommodation of Chinese styles of thought and speech even though it contains words from different languages.


This can be seen clearly in the transliteration of mandarin-to-singlish terms.  Here’s an example - ‘where got?’, meaning, ‘who said so’, or serves as a denial.  It is actually a direct  transliteration of the mandarin, ‘na li you’, or ‘where have’.  Or, ‘how come like this/that’ is a direct translation of ‘wei she me zhe yang’.  Whilst it is said in English, or ‘Singlish’, and used by all ‘Singlish’ proponents and practioners, it is actually a transliteration of Mandarin.  Other suffixes like ‘la’, ‘lei’, ‘mah’, ‘lorrr’, are also of Chinese origin.


Pronunciation of English words, like, say, monopoly or psychology, ‘Singlish’ defendants might say that pronouncing it ‘mo-no-po-lee’ or ‘psy-ko-lor-gy’ is the ‘Singlish’ way.  But actually, that is, again, a pronunciation style that comes from the Chinese language where words are 'chopped up' or divided into separate monosyllabic words.

Unlike Malay or Tamil, single Mandarin words do not have ‘curves’ in them, or are monosyllabic.  Like the Malay word, ‘saya’ is a single word but contains two syllables.  Most Tamil words can contain even more than that.  But most Mandarin words, with the exception of words like ‘xiao’ amongst others, are monosyllabic.  Hence, when words are divided as in the above examples, they are a manifestation of Chinese-English, and not Singlish.


‘Singlish’ is also highly abbreviated and betrays self-absorption, or the character of a petulant, self-interested child.  For instance, in this popular example that may be found on the net, and which actually extols ‘Singlish’ over English, goes,

Britons : I'm sorry, Sir, but we don't seem to have the sweater you want in your size, but if you give me a moment, I can call the other outlets for you.
Sporeans: No Stock!

When someone is in the way,

Britons : Excuse me, I'd like to get by. Would you please make way?
S'poreans: Lai, siam! or Siam, hor! or Skius!

When declining an offer,

Britons : I'd prefer not to do that, if you don't mind.
S'poreans: Doe-waaaan.

When disagreeing on a topic of discussion,

Britons : Err. Tom, I have to stop you there. I understand where you're coming from, but I really have to disagree with what you said about the policy.
S'poreans: Talk cock (rubbish) lah you!


In the first example, the above is not ‘Singlish’ per se, but actually betrays a self-interested focus.  It fails to validate people as more than an opportunity or impediment to a self that is focused on its own interests.  Hence, instead of recognising the customer as a human being who needs help, they are simply fobbed off with a, ‘no stock’, because there is no money to be made from that person, and hence, the person’s value is diminished and s/he’s sent on her way with the fewest words possible.

In the second example, when someone is in the way, there is a recognition amongst the British of the others’ right to be where they are, and our right to pass.  Hence, both rights of self and other are given recognition in the tone used - though the British example above is not entirely accurate, but the approach is similar.  But in the chinese example, the person is an impediment.

In the fourth example, one sees aversion to contradiction and a petulant brushing off of what is being said - quite typical of most chinese whom either say that, or just remain silent and change the subject, turn away, or deem you a 'troublemaker', 'chong hei'(long-winded), 'twisting words', etc.    There doesn’t seem to be any need for reasoning or debate.  Hence, from the governmental level to the popular one, we see phrases like ambiguous ‘inciting hatred’, ‘causes law and order problems’ to ‘talk cock lah’ - which, incidentally, appears to of chinese origin, or more accurately, Hokkien (chinese dialect group) origin, from, ‘kong lan chiao wei’ (talk cock language)

'Chinglish'. It is not just a language. It is a system of thought and thoughtlessness. You might be using English in speaking it, but you're thinking like a Chinese whilst doing it.  The style of thought underlying this sort of language-usage is quite the corollary of chinese perceptions emerging as a result of a 2000 year old Legalist-Confucian ‘dog-eat-dog’ culture brought about by seemingly unassailable top-down oppression; where contradiction of the powerful or popular is deemed to be inappropriate; and where the duty of the people is deemed to be the search for ways to put up with top-down oppression and greed as opposed to questioning the meaning of life or their identities as anything other than 'practical' beings.  When one is promoting or values conformity, no reason is required to rationalise it.  Hence, the production of phrases like 'talk cock lah' to discount it altogether.

Hence, over time, the value of everyone and oneself is reduced to that of a competitor, impediment, a self-aggrandizing opportunity, or just a 'practical' cog and wheel within a machinery beyond one's comprehension and control.  One's appreciation of all reality will as a consequence be superficial, 'face-value', and 'practical' - and without the right to question one's government, that of a child reared under authoritarian auspices. As a result, such perceptions would naturally produce forms of expressions that focuses on the self as opposed to the equal value of the other.  The same can be seen in contemporary popular American English in the usage of words like ‘whatever’, ‘duh’, etc.

It's strange that the person who concocted the above examples of the superiority of ‘Singlish’ did not appreciate it as being an indictment of the self-absorbed nature of the language, or its ‘childspeak’ qualities.  That indicates the degree to which such perceptions have fast become the norm amongst singaporeans, and especially so since these examples were widely circulated some years ago, and was cause for much ‘Singlish’-celebration, a sense of relative superiority, and received just about no condemnation by local bloggers, etc - other than ed, Chinglish, a brief critique of Chinese critique of British English.


Usage of Singlish.   An interesting aspect of 'Singlish'-usage is that it is used mainly with 'practical', 'face-value', or trivial/casual conversations.  There are hardly any metaphors, analogies, poetic forms, or, what quite a few Chinese term as 'bombastic words' or 'flowery' expressions when one uses 'Singlish'.  This is not the case with the usage of, for instance, the Tamil language which uses these to a great extent.  That indicates that in terms of usage itself, Chinese norms of 'practical' and 'face-value' dictates the purpose it is used for and its vocabulary and structural content.


One can also appreciate the similarity between a child’s attempt to speak English with 'Singlish'.

If a child can speak it, it shows that adults who use it haven't progressed far beyond the perspectives of a child. Whilst the child’s efforts to speak proper English is quite the struggle, in the case of ‘Singlish’ it is lauded as the unofficial mother tongue of singapore so that quite a few Chinese and non-Chinese do not have to make efforts to appreciate and speak another language as their natives intended.  They can just brush off cultural-self absorption/familiarisation, and their difficulty or deficiency in appreciating or learning something different with an ‘that’s Singlish, that’s the way we do it‘ - which is not dissimilar to how americans persist in pronouncing non-western words the way they are accustomed to.  That excuses Singlish-users from the discomforting struggle involved in checking oneself and changing what one is used to.  It enables them to couch themselves in the comfort of ‘the way things have always been’ without having to view it as a deficiency and thus threatening to cultural or personal self-esteem.  This quite mirrors the practice in many arenas, and also accounts for the xenophobia, apathy, and racism of quite a few.

A point worthy of noting is that 'Singlish' is what chinese children speak when first learning to speak proper English.  It is not what Malay or Indian children speak when they are learning to speak proper English.  If they do, it is due to predominant influence.  Personally, i've noted my niece's movement from 'broken' non-Singlish English as a child, to proper English, and then, on to 'Singlish' after she went to school and began associating with other Chinese children.


So, it would be more accurate to say that ‘Singlish’ is an amalgam of Chinese-English, with a smattering of Malay.  There are hardly much Indian words in this language - and if Indian words are used by the Chinese, it is generally accompanied with a laugh of ridicule emerging from the ‘central land’/childish (translation of the mandarin words for ‘china’) style of ‘thinking’ that anything that is different is funny or only worthy of ‘tolerating’ as opposed to ‘appreciating’ - unless it is of western origins.

(This was of course not as much the case in a more egalitarian past where many Chinese spoke Malay and quite a few Chinese were becoming 'westernised' and picking up the perspectives of the Indians and Malays as well, and it was during that time that most Malay words that are found in Singlish today was incorporated.)


Given the simplistic and simple nature of ‘Singlish’, i.e. akin to a child’s limited vocabulary and proficiency in English, it is also not very accommodating of philosophical or intellectual discourse.  There aren’t many intellectual and philosophical discoveries to be made with a language that discounts detail, contains not significantly much more vocabulary than that of a child, and generally does not comprise more words than required to have a simple conversation or order food.

Increase in one's vocabulary illustrates a greater appreciation of the details comprising life, and the contrast between these details.  It is this contrast, and the appreciation of the contrasting details, that leads to the production of more words.  Limit one’s vocabulary, and you end up limiting one’s appreciation of intellectual and aesthetic details (ref. George Orwell’s ‘Newspeak’).  And the failure to appreciate another way of looking at things, as illustrated, amongst others, in learning to speak a language the way their natives do, reinforces self-absorption and enables one to remain entrenched in what’s familiar and commonly practiced.  That is ‘Singlish’.  When one considers Chinese aversion to philosophy or philosophical discourse, in favour of the ‘practical’, it is no wonder that a language that isn’t structured to accommodate philosophy or the detail in things is created.


‘Chinglish’.  It is not just a language.  It is a system of thought and thoughtlessness.  You might be using English in speaking it, but you’re thinking like a Chinese, whilst doing it.  And if a language is a product of this sort of ‘thinking’, it will most likely perpetuate the sort of thinking that led to its production. You could say that the usage of 'Chinglish' itself contributes to the socio-political ailments that afflicts the nation as it prevents one from thinking beyond its perspectival structure - just like the 'singaporean' pastimes of eating, shopping, and gambling.

So the next time you speak 'Singlish', remember, it isn’t.  And it might very well make less of you, and you, less of others, than you and others might otherwise be.  Try translating that into 'singlish', a language with few words because not much thought is required to use it.