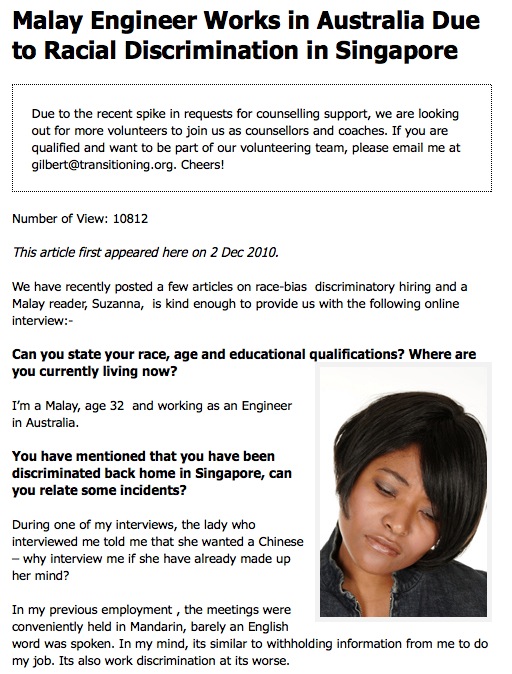 Whilst ed has retired from the issue of race in singapore - as most chinese, online and off, don’t seem inclined to bother; most of the ‘others’ have been underdeveloped enough by it to not having the sense to deem anything amiss; and also because most of what has to be said about this issue has been by a2ed.com - I feel compelled, for the interests of all, to post the following comment by a2ed on an article in transitioning.org, entitled, ‘Malay Engineer Works in Australia due to Racial discrimination in Singapore’.  Thumbs-up to 'Transitioning.org' for their rightful interest in this issue. (click image to read the full article in transitioning.org)

The comment below was posted at the aforementioned site, and republished below. with a little more elaboration.

The link to the article was sent to a2ed by a non-chinese singaporean - who shies from commenting or writing on such matters as s/he fears repercussions, and hence cannot remain blameless in this degenerating state of affairs.  The following basically summarises most, albeit not all, of what has already been discussed in more detail at this site - more so than any other site in singapore.

“Good article. I wouldn’t say it’s enlightening as I, amongst all my non-chinese friends, have had to put up with chinese racism for most of our lives. Even chinese friends aren’t really ‘friends’ as they tend not to bother about the interests of other races, are racist themselves in terms of colour, features, etc, do not notice racism when it happens, etc. But in order to ‘get along’, we have to ‘tolerate’ this and put on a smile and take them for the little that they have become due to governmental cultural/racial supremacism.

It is only when equal respect and appreciation is accorded, can there be enough fusion between races to create a singular singaporean culture that contains the best components of all cultures. Quite a few of my friends have left, and i’m in the process of it myself. You could say that we haven’t become used to 2nd class citizenship, have a healthy respect for ourselves despite media and government efforts, and discrimination by quite a few chinese.

With regards to malays being lazy. They are not. They just aren’t as opportunistic as most as they hail from a highly communal culture – which the other races would do well in learning from. Hence, unlike the chinese, they do not have an economic ‘siege mentality’ – significantly engendered by governmental exploitation and oppression of the people…as is the case in chinese/singaporean history….which has, as a result, produced a ‘chinese’ culture that makes those socialised within it what they are, and hence think the Malays ‘lazy’. With the chinese standard being taken as the norm, it’s no wonder people believe in the myth of ‘malay laziness’.

As for our brethren across the causeway (and i mean 'brethren' with reference to both genders), they aren't 'lazy' or 'laid back' either.  As the Malays, as stated, are a highly communal people, with relatively less top-down oppression as was and is the case in China, it's no wonder that they aren't as economically belligerant.  Despite ed's condemnation of the fascist and racist Bumiputra policy, it has to be admitted that this policy, in part, helps, albeit paradoxically, maintain this communality as they do not have to 'update' their economic belligerence from communality to 'make it' with more economically 'vibrant' and 'hardworking' others.

It must also be stated that people whom are natives will tend to go on the way they've always done - in the case of the Malays, relatively communal-like as opposed to being economically 'hardworking' - and hence, with the influx of more economically belligerent peoples, or people whom might work harder to survive or 'make it' in a foreign land, they might come across as 'lazy'.  They had a culture that enabled them to survive as long as they did, and hence, there was no need for them to 'update ' it  It was only in competition with the economically belligerant or those whom were insecure in a foreign land, that this need might arise.

With regards to creating one ‘singaporean race’, there has to first be equal respect, and appreciation – not just ‘tolerance’ – of each other’s cultures. Each culture must be given equal prominence – we shouldn’t be celebrating ‘chinese’ culture as if it is the national culture, whatever the numbers of the people, in relatively prominent locations, chingay, etc.

It is only when equal respect and appreciation is accorded, can there be enough fusion between races to create a singular singaporean culture that contains the best components of all cultures. Singapore was going in that direction in the 70s and early 80s. The government put a stop to that as they knew that confucianism would buy enough intellectual and perspectival docility amongst the people to get them political longevity. Hence, to just fuse everyone as they are today is to fuse a stronger chinese culture with diluted malay and indian cultures. That would make ‘singaporean’ culture ‘chinese’, not singaporean.”