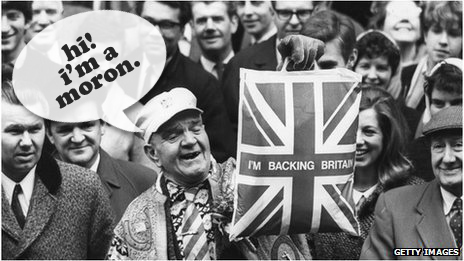 The following are 3 comments placed beneath the BBC article, ‘Buy British: Why isn’t there a new campaign?’ (click image to go to bbc article)


“ Buy British? Sure. Provided the people own the companies they buy from. But since they don't, and when it comes to the big companies, we're just 'buying British Elite' produce. There's no such thing as a singular 'British'. But if you do buy into that nonsense, then you might 'buy British'.

“ All this talk about 'Buying British' is nonsense.  If the companies you support get rich enough from your money, they're just going to up-sticks and produce them cheaper elsewhere, and sell them back to you at the same price or more.  Where profit is paramount, patriotism is idiocy.

“ Backing your local companies is akin to investing in your future subjugation.  The same thing goes with companies that were ‘privatised’ after they had made enough money from their ex-owners - the people - to do so.  Virtue is only virtue within a virtuous system.