Singapore Police Force is investigating blogger and chief editor of New Asia Republic, Donaldson Tan for re-posting an extremely offensive picture to Muslims; one of a prohibited animal in Islam, superimposed on the Ka’ba – Islam’s most sacred site, on his Facebook.  In his report to the police, the complainant, Amran Junid, also highlighted a Serena Lee for posting racist comments on that FB post by Donaldson Tan. - toc


Whilst I have retired from this issue, it would be irresponsible of myself to not comment on related matters as and when it requires address beyond the capablility of the 'insightful bloggers' and 'opposition' in singapore.

The following is ed’s response, published partially as a comment on a seemingly fair-minded singaporean Chinese individual, Kirsten Han's, post, entitled, 'You can't arrest the racist out of someone'.  Further thoughts on Donaldson Tan’s statement follow.

“I have no problem with racist nonsense like the ones in question - the Gods know that i've had to 'tolerate' with chinese racism all my life - which makes singapore's 'racial tolerance' interchangeable with 'tolerance of chinese racism'.

"Singapore is a multi-racial, multi-religious society. That much we know; it’s been relentlessly drummed into our heads since we were kids in school....But as I look around, there is this sneaking suspicion that we might not actually be a real multi-cultural society."


You don't need to look far mate.  Just take a look at your sidebar.  You obviously don't seem to have a problem proudly displaying the 'singapore blog awards' logo awarding your site in your side bar whilst failing to notice how it presents singapore as a chinese state.  You ought to go do some soul-searching Kirsten old boy.  I think you're too used to seeing things through sinical eyes to notice this problem, and, unwittingly, have profitted from it as well through the additional motivational/occupational/social/political resources all chinese would be able to access in greater degree than 'others'.

The reason why i welcome racist nonsense as posted by the bloke in question - who posted a picture of a pig on the Kabba...ridiculous nonsense of course - i take it as an opportunity for people to reaffirm their commitment toward the appreciation of difference and multiculturalism by speaking out against it.

It is at times that people are exposed to such nonsense that gives them the opportunity to rethink their status relative to less advantaged others.  Otherwise, in the absence of such blatant nonsense, people might just get used to the less overt racism that takes place on a daily basis and, hence, take it as the norm.

In other words, it is the presence of a greater evil that might lead people to question the lesser evils that they have taken as the norm, and perhaps, amongst a host of others, look at the 'singapore blog awards' logo and say, 'hey, i thought we're supposed to be a multicultural state?  What's with this bilingual logo that makes nothing out of the non-chinese?'  In that mate, you're a 'passive' racist, i.e. one who only notices racism in its more obvious forms whilst profiting from its less obvious ones.

It's no wonder that the cartoon accompanying your article has a chinese character as its central character (centre finger).  We'd call it a 'Freudian slip'.” 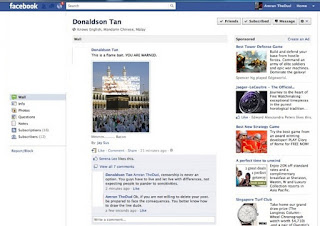 Now, with regards to Donaldson Tan (looks like the Tans are really taking centrestage in quite a few arenas in singapore)  comment (see pic above, with a magnifying glass):

Censorship is never an option.  You guys have to live and let live with differences, not expecting people to pander to sensitivities.

That’s pretty rich coming from a member of singapore’s ‘preferred’ race - as illustrated by, amongst a host of others, singapore’s Confucian leader, Lee Kuan Yew, stating that ‘singapore must always have a chinese majority’ - which the chinese didn’t take issue with - importing mainland chinese to keep up the ‘balance’, promoting chinese culture and language over all others, and even erecting a statue of chinese mass murderer, Deng Xiao Ping in a prominent location.

I’d like to see this Donaldson take issue with ‘his own’ for what they’ve become given the racist socio-political events of the past decades in singapore.  It’s alright to stand up for the ‘freedom of speech’ and criticise others, but keeping mum about how ‘your own’ have gained ascendency, not by exceptional intelligence or talent, but discrimination, is quite hypocritical don’t you think.

But the main point i’d like to take issue with is his statement, and to reiterate, ‘Censorship is never an option.  You guys have to live and let live with differences, not expecting people to pander to sensitivities.’

This bloke is being silly of course, given that he doesn’t even appreciate the glaring contradiction in his statement.  If we ought to ‘live and let live with differences’, why on earth isn’t Donaldson doing so with the Muslims.  Putting a pig on the Kaaba isn’t really ‘living with difference’ is it.   This is just a more blatant example of the generally chinese approach toward difference.  Ignore-cum-ridicule.  ‘Fair’ is good, ‘dark’ skin is bad; indian are funny when they shake their head when expressing themselves; Malays are lazy; Indian language is funny because it doesn’t sound like Mandarin; Indians talk too much/ask too many questions; Malays have no foresight; Malays aren’t practical;....and the list goes on and on for anyone, be they chinese or otherwise, to see.  What you’re seeing here is the imposition of the chinese norm in judging reality.  I wouldn’t mind that, but give that their perspectives and culture is borne of oppressive and intellectually narrow circumstances in China, such an imposition makes less of us all. 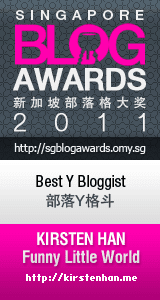 When you look at a bloke like Kirsten Han, and other bloggers in the confucianised state of singapore, you might think he was a fair-minded individual, and certainly not a racist.  But that would be completely untrue.  The common factor amongst people like Donaldson Tan and Kirsten Han et al (it’s not just Kirsten, mind you) is that their either intolerant of difference, or not mindful of that which discounts it.  Hence, there is hardly anyone taking issue with lots of racist situations in singapore, or that which engenders it.  It is from such a climate that the likes of Donaldson Tan can arise.

And it as times like this that people like Kirsten rear their hypocritical, albeit unwitting, head and speak up for ‘difference’.  That, actually, is nothing short of buying their way out of actual appreciation of the racist condition of singapore.  They can give themselves a pat on the back for standing up for the Malays in this situation, and then go take the front position whether it be for the presidency or a job that prefers, ‘mandarin speakers only’.  It is also these times that the government can come across as racially fair-minded by standing up for the Malays, whilst keeping the presidency and premiership for the chinese, along with a host of other advantages.  It is nothing but a whitewash.

The point here is not to generate hatred for the Chinese.  Rather, it is a call to all non-chinese to not deem nothing amiss simply because you’re used to it, or brought up to deem it normal or ‘everywhere in the world also like that one lorrr’, and to all chinese to do more than to speak up only in the face of more blatant examples of racism such as the ‘pig on the kabaa’ issue.  If it is only at times like these that you say something, and keep silent about the host of other issues, it is nothing short of hypocritical.

I’m just describing things as they are.  And it is up to you to prove the ed is wrong.  And given the reality of that described, the only way that can be done is to undo it via conscientious empathy and cross-cultural appreciation, as opposed to a simple and oft-used strategies of ‘tolerate-cum-ignore’ and 'become like us-or else.