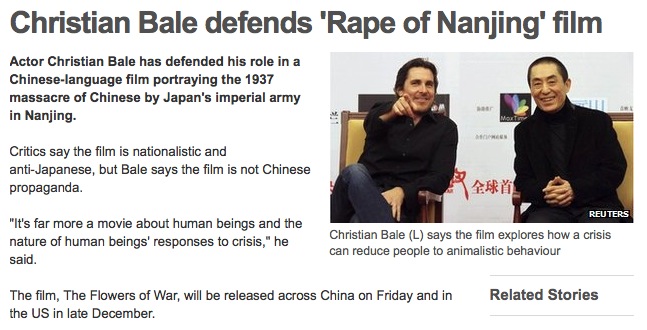 “Actor Christian Bale has defended his role in a Chinese-language film portraying the 1937 massacre of Chinese by Japan's imperial army in Nanjing.

"It's far more a movie about human beings and the nature of human beings' responses to crisis," he said.

The film, The Flowers of War, will be released across China on Friday and in the US in late December.

This year China has released several big-budget epics with strong patriotic themes.
The films have coincided with a slew of major anniversaries, such as the Communist Party marking 90 years since its foundation.

And Chinese officials have encouraged film-makers to push China's message to the world.
But Bale, who last year won an Oscar for his role in The Fighter, dismissed criticism of the film.

He said it was a historical piece, and anyone describing it as propaganda was not looking at it closely enough.

He told reporters it was an exploration of how a crisis "can reduce people to the most animalistic behaviour but also raise them up to the most honourable behaviour you could ever witness".

The Nanjing massacre, which is also called the Rape of Nanjing, is one of the most notorious episodes of Japan's invasion and occupation of China.

Some 140,000 Chinese were slaughtered, according to international observers, although Chinese historians put the figure much higher.

For many Chinese, the apologies offered by Japan have never been enough, and the event still tarnishes relations between the countries.”

The 'Rape of Nanjing' was truly a horrendous event in human history.

That's the funny thing about nationalism and patriotism. It is sort of carte blanche to local authorities to do as they will to 'their own' but do so with more impunity because they can rely on the murderous actions of 'foreigner's' on local soil to wash away the blood-stained crimes of their own 'native' overlords.

One of ‘ed’s laws’ is this. The more you accept homegrown evils for their being homegrown, the more you’re gonna take it out on those whom aren’t’. You can call it the ‘physics of human relationships’.In that sense, you can call this movie a 'propaganda' film that serves to continually divert the attention of the Chinese people from their own homegrown and native evils.

(Well, Christian Bale, after all, is just an actor.  Hence, he wouldn’t be smart enough to realise these things....which makes me wonder why the people pay these gits as much as they do.)

So it appears that ‘the apologies offered by Japan have never been enough.’  Perhaps the Chinese people, subconsciously, realise that whatever the Japanese have to offer by way of apology and recompense, it would not be enough to make them feel better given that the wounds suffered by them in its entirety includes those inflicted by their own overlords.

If you think about it, sometimes when we get pissed off with ill-treatment of one person, it is not because of what that person alone has done unto us, but the evils we have had to suffer from many others whom we have excused because they are ‘family’, ‘friends’, ‘compatriots’, etc.  It is the suffering that comes from accepted evils that makes unacceptable ones even more unacceptable.

The problem with a people perspectivally afflicted in such a manner is that the consequences of their accepting local evils for their being local just means that the seething anger and malice built up over the millennia, might just lead to their taking it out on others, or/and, not minding it when their government acts similarly against others (like China did and does to Tibet) - just as they demand more recompense from foreigners for doing unto them that which their own ‘native-born’ compatriots have bettered by far worse.

One of ‘ed’s laws’ is this.  The more you accept homegrown evils for their being homegrown, the more you’re gonna take it out on those whom aren’t (homegrown)’.  You can call it the ‘physics of human relationships’.

Go think about that.