Why do well-off people shoplift? 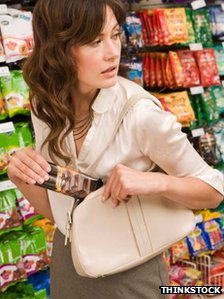 “Chef Antony Worrall Thompson has apologised for shoplifting from a supermarket. But what makes people steal things when they have enough money to pay?

Worrall Thompson has apologised for his "stupid and irresponsible actions", after being cautioned by police for leaving a branch of Tesco without paying for small value items. He had reportedly done this on five separate occasions.

The 60-year-old has spoken of the shame of letting his family and friends down. The big question, he says, is "why".” - bbc

Well, that’s the heading of a BBC article that chanced across my attention today.

Perhaps they can have anything they want because they have the ‘well-offness’ to do it.  That takes the thrill out of acquiring something through the end-result of a month of minimum wage, and valuing it even more because of the effort taken to acquire the funds to get it.

Of course, another take on it would be that given that the rich are used to making money off the backs of the minimum-wagers out there, they are just carrying on this tendency via shoplifting.  The arena wherein this tendency is expressed daily changes, but the habit is not too dissimilar is it;)

The solution, get them to work for the money to get what they want, and then they might get enough thrill out of it and leave the shoplifting to the truly deprived.

As for the rest of the shoplifters out there, given that humanity is currently interned within a capitalist system where unrighteous acquisition is rendered righteous by it being lawful, generically, what this does is to hone the thieving instinct in most of humanity.  As the (ed’s) saying goes, if you don’t take issue with evil, it can only mean that you aren’t that different.