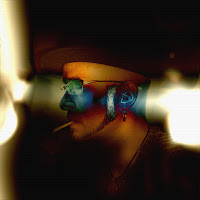 Well, V (singaporean chinese girl working in the UK....and now back for the holidays) kept bugging the crap out of me to write about this experience....so here goes.

I arrived in singapore on the 15th of Jan in the evening via SQ with V.  I got to the baggage retrieval belt first and quite immediately got the attention of the customs police standing at the checkpoint near the entrance to the arrival hall.  Well, never mind.

I loaded up both V’s and my hand-luggage onto one trolly, and our larger luggage onto another trolley.  V arrives.  She takes the trolley with the hand-luggage, and i, the trolley with the larger ones.  As i approach the customs point, a Malay police officer - a young bloke - rushes over and quite curtly, asks me, whilst ignoring V, ‘Sir, do you have anything to declare’.  ed says, ‘No’.  ‘Put your luggage through!’, says the police bloke, curtly, and with a frown.  ed gets pissed.  I stop right beside the police officer, point at him with my thumb, and call to V who has walked ahead a couple of steps, saying, ‘See what i said earlier.’  The police officer, or more like ‘boy in blue’, looks at me with surprise at my reaction, and then looks away, probably realising that he picked on the wrong Indian to screw around with.  V comes up, and he asks her to proceed out of the transit area without checking her.  The other two Malay officers look as if they feel bad about my being stopped by their colleague (credit to them), and one of them, a bloke, smiles at me attempting to calm me down, but it doesn’t work.....as i have a healthy sense of self-respect and don’t put up with racial harassment whatever the state.

Ed says to them both, ‘For 20 bloody years in my travels to and from the UK, every single time i come through this airport, i get stopped!  Every single time i go through the UK airport, i NEVER get stopped.  I lived in HK for more than year, and i see others getting stopped at the airport or outside, but i never get stopped.  Can you tell me why i get stopped here?!”....as my luggage goes through the scanner.  The officer (not the boy who stopped me) smiles again in an embarrassed way....he obviously feels kind of bad.  The female officer then questions me after the contents of my luggage asking if i have some kind of machine in there.  I said, ‘keyboard’ (referring to my smaller-sized midi keyboard).  ‘Do you have another machine in there?’  I say, ‘no, i don’t think so’ (it’s only later that i realised that she was probably referring to my WDTV box which enables me to play digital files on the telly).  ‘Oh, it’s ok, never mind.  Thank you’.  Very polite girl....probably trying to make up for her colleague’s stopping me.

I walk off with my luggage, and the other officer smiles at me again in an apologetic way, and i just shake my head.  The officer who stopped me looks steadily away.

Is this racial harassment?  Throughout the time i was waiting for my luggage, i saw this police bloke stopping only one other person.  A white bloke.  All chinese were let through.  But as i attempt to walk through with V, i get stopped, and she doesn’t.  And the most incriminating part of it all is that if he really wanted to check my luggage, he would have had to stop her as well as she was carrying half my luggage.  After all, they saw me loading up both our luggage onto both trolleys.  And given that there were two hand-luggage on her trolley and two-larger ones on mine, wouldn’t it stand to reason that if he wanted to check my luggage, he would have to check the luggage of V's trolley as well?  Hence, the allegation that this stop was racially motivated becomes all the more plausible.

When V recounted this story to her mother, even she, in Hokkien, got angry and said, ‘how can they do this to him?  How come they stop him but never stop you?’.  My mum, a usually passive person, got pissed off as well.  ‘How come they go around bullying Indians?!”, said she.

if there are parallels to this behaviour in the social arena, then, whilst the police might stop the chinese or ‘normal’ people every now and then, when it comes to minorities, and especially those who stand out, they get stopped ALL the time.I said to V, “not only have I had to put up with discrimination that has led to my economic prospects being severely compromised - despite my upper second honours degree - now i have to put up with racial harassment as well?!  No bloody way.  The next time any so-called police officer stops me, he better have a damn good reason for doing so.  I had to put up with this from juvenile gangsters when i was younger, and now from equally young juvenile police officers.  What is it?  They giving uniforms to gangsters these days? Why is it that these o-level boys are given the power to use their uniforms to harass people whom are different, ethnic minorities, or just as an effort to show the public ‘who’s boss’?”

The point is this, if there are parallels to this behaviour in the social arena, then, whilst the police might stop the chinese or ‘normal’ people every now and then, when it comes to minorities, and especially those who stand out, they get stopped ALL the time.  This, in effect, makes their normal checks a cover for their prejudicial ones. That is nothing short of racial harassment.  By parallels in the social arena, i refer to similar aversion to difference, and favouring the conventional - from race to fashion.  This is already evident in the media, job advertisements, government policies, the socio-economic arena, and so on and so forth.  Amongst the juveniles, we see people ‘finding trouble’ with the outstanding.  So when we see the police behaving in a similar fashion, it stands to reason that this social approach to difference would be evident in their checks on the people as well.

And this becomes all the more the case when it comes to  lesser educated junior police officers - objectivity, unfortunately, is a skill that generally comes with higher education, and through particular subjects.  It is not gained by youthful experience in a state where coffeeshops play chinese programmes all the time, where mandarin-speakers are preferred, and where the government clearly state that the state should have a racial balance in favour of one race over all others.  In such a state, people become consequences of such a state of affairs with minorities doing unto each other that which is done unto them from up high.

Like I said to V, me and some of my other Indian friends whom have been stopped do dress differently.   But you won’t find any Indian gangster dressed like us.  Even they look at us and don’t seem too thrilled that we are as outstanding as we are and hence, seem to be in competition with them for public prominence.  So when the police stop us, they know this as well.  I’d put it down to a situation not dissimilar to that of the Afro-Americans and Latinos in their ‘Zoot suits’ back in the 60s and before that.  As so-called 2nd class citizens, they are expected to be keep in their less prominent place, and not stand out, or risk harassment by the police.  Even members of their own race might harass them to make up for their own feelings of inferiority relative to the dominant race.  The same thing is going on here in singapore, with harassment of minorities by the police of other  and their own races.  It is corollary of racism-cum-aversion to difference culture of the state.

Any ‘spot-check’ can be subject to allegations of racist intent, or a gangster-like aversion amongst police officers to other’s being confident and individualistically-attired.   After all, even in the working and social arena, such people are deemed to be ‘arrogant’.  And the chinese do have a saying that goes, ‘if a nail sticks out, bang it in’.  It is, hence, not surprising that it an ultra-conformist orwellian-like confucian state, difference if going to be battered down, cast aside, ignored, passed over for job opportunities and promotions, and harassed at all levels of society.  In the absence of any valid reason, the claim that it is, ‘just a routine check sir’, can serve as carte blanche to all police officers to effect their own prejudicial agenda.  In a racially self-absorbed, xenophobic, state like singapore, that allegation becomes all the more plausible.  And given the host of stories i’ve heard from my other indians friends, it becomes plausible to the point of certainty.

When i asked V why she wouldn’t mind relocating back to singapore and asia for work, she said,

“I can have opportunities which you can’t have, i don’t have to be checked by the police because i’m not different and i’m not Indian......so i understand why you hate this country and want to stay in the UK....because you are respected there for what you are, but harassed here by these people for not being chinese....”