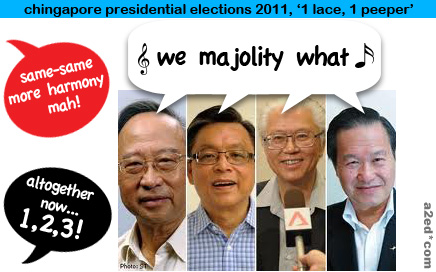 The following is ed’s thoughts on an article by an Sg chinese who, quite typically, blames the victim when it comes to discrimination.  The funny thing about such people is that they actually think themselves as non-racist whilst not realising that their views are typical of those who view much of that which is racist as not racist because of their being accustomed to it, or/and benefiting from it.


But one can be sure that such nonsense as this bloke writes will be received warmly by other chinese as it enables them to walk away pretending that they have achieved what they did because of their intelligence rather than discrimination by both the government and the people.

This bloke’s article is actually a consideration, or rather, a failed attempt to intelligently consider a2ed’s earlier article, ‘on Malay emigration and evolution.’

“I have a simple solution: I think all Singaporean students should learn Mandarin and Malay regardless of their ethnicity. Both languages are dominant regional languages in the region and knowledge of both would prove very useful. Having such a rule would end all bitching like, "Why should Malay people learn Mandarin?" as the respond to that would be, "Well Chinese people learn Malay too, so why not vice versa?...

Indeed, in Singapore, any kind of discrimination in the work place is skill-based and not race-based. Let me give you an example, some roles in customer services would require you to speak Mandarin if the company is actively targeting Mandarin-speaking customers. Now if a Chinese-Singaporean who doesn't speak any Mandarin (or speaks Mandarin very poorly) applies for the job, this Chinese-Singaporean in question would be rejected for the position on the basis of not fulfilling that particular skill required, rather than on the basis of his ethnicity or race. After all, not all Chinese Singaporeans are fluent in Mandarin - some actually struggle to even have a basic conversation in Mandarin!....

We need to be sensible and not emotional about the issue. There will probably be some jobs in the service industry in Singapore where a working knowledge of Mandarin is probably going to be very useful because of the clientele (PRCs and older Chinese Singaporeans who don't speak English). This is simply a reflection of the market's demands for a certain kind of service - it has nothing to do with discrimination. .....

I'd like to say this especially for my Malay and Indian readers in Singapore - I know exactly what it feels like to be an ethnic minority. I have lived in the UK (on and off) since 1997, I hold a British passport today and live in the UK where Chinese people number just 0.4%. However, I don't see my life here as a Chinese vs white, majority vs minority daily battle.... - source"

To state that job discrimination in singapore is ‘skill-based’ and not race-based detracts from the fact that given the mother tongue policy, the ‘right skill’ is given to the chinese and not others.  This is further reinforced by the age-old SAP school system structured to chinesify and give a leg up to the local chinese over other races, and hence, enabled the chinese to take over the economy from the truly singaporean english-speaking, westernised and highly multicultural Malay, Indian and Chinese of the 70s and early 80s.


(the chinese amongst this group would themselves refer to the chinese of Sg-today as 'ching chong chinamen'.  The last 'chinese' i heard saying that was a women by the name of Ursula in her late 60s - 2 months ago - who didn't like her grandchildren being brought up speaking mandarin.  It's not that she's a racist.  Rather, from the other things she was saying, and in fluent english without a chinese accent, i could see that she preferred multiculturalism as opposed to being 'just chinese'.  She is a true singaporean, and one of the last of a dying breed.)


I've heard accounts, even from civil servants whose chinese bosses have said that malays are lazy and indians ask too many questions as a reason for not hiring them.  And this account, by the way, was from a chinese working there.  I've heard many other stories as well, whilst experiencing first hand how non-chinese applicants are treated by the chinese myself. I wouldn't just put it down to a lack of the right skills.  That would simply enable the chinese to say that they occupy their positions because of intelligence and hard work, instead of racism.  The latter must be proven to be untrue for the former to stand.  Or else, we are going to hear more chinese saying, like a former chinese friend of mine living in Hougang, who said that Channel 5 english programmes don't have much indians in them because indians can't act.  And this bloke has an honours degree as well.

But this Lim Peh obviously would rather put discrimination down to the non-chinese not being skilled, and their complaints about it as 'emotional' and 'insensible'.  That was an approach taken toward women at one stage when they were complaining about their condition as well.  Seems like self-absorbed idiots like Lim, despite their being able to speak many languages, only manage to say the same nonsense, but in different languages.

And then, via making it compulsory, it whitewashes the means that make it such, further reinforces chinese dominance, and basically makes it all alright.  Malay shouldn't be compulsory either.  Only English should be made compulsory, as it is the tongue that mothers cross-cultural/racial integration without favouring or elevating any one local race in singapore.  Finally, chinese/mandarin speakers preferred ads should cease as that further imposes the 'need to study mandarin' or make it compulsory.  The mother tongue policy should also be ended for reasons that are obvious to the non-self absorbed.(as it works in tandem with the ‘mandarin-speakers preferred’ ads to further disadvantage and underdevelop the non-chinese.)

As for knowing what it feels to be a minority because of your being a minority in the UK, that is nonsense.  Being a minority in the UK and being a minority in a chinese supremacist/racist/fascist state is very very different.  I've stayed a total of 8 years in the country, and am currently in Essex, Harlow, and have a vastly different experience here from my 'friendship' with the chinese in singapore.  Opportunities abound, and i am judged purely by my merits as opposed to the beautiful brown colour of my skin.  You don't need to think about your race on a daily basis as they don't whitewash racism with 'everywhere also like that one lorr' and 'we majority what!'.  Rather, what you excuse in singapore would cause a public furore in the UK.  And because of that, you don't need to think along racial lines on a daily basis.  Basically, the 'whites' in the UK do not treat you as do the chinese others in Xingapore mate.  If they did, you'd be rushing back to Sg on the next junk or jet available.

I'm surprised that your stay in the UK hasn't taught you much about egalitarianism and multiculturalism.  Perhaps you have the wrong channel on.

What you are proposing at the end - considering what you said and failed to say throughout - is not 'getting along' whatever our race, etc, but 'getting along' despite racism.  That doesn't make you idealistic.  It makes you one who, having benefited from racism, haven't much of a problem with it.  It doesn't matter if Limpeh speaks both mandarin and malay.  LKY spoke it too.  That didn't stop him from turning Sg into a chinese state did it.  I talk about hard facts about what is happening and what isn't.  What you're doing is glossing over it with short-sighted rhetoric.”