on Malay emigration and evolution 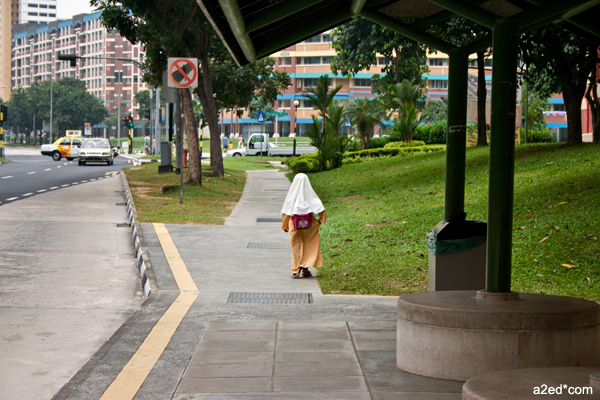 I'd like to bring you the attention of this article about the Malays having higher rate of emigration relative to population demographics. - The Flight of the Malays

I just read the article link you provided - on Malay emigration.  Interesting.  I'd like to add...

Malays leaving because they feel alienated and marginalised in what was supposed to be a historically Malay country....

Yes and no.  There would generally be two reasons for leaving, which would be generation dependent.  The first generation, after singapore turned confucian, might do so because they might be pretty pissed at the way singapore became a 'chinese preferred' colony of china via a chinese supremacist leadership.  In other words, they experience a conflict between their perception that singapore ought to remain, at least, a multicultural state as opposed to a pro-chinese one.  That conflict might be more common amongst people of my generation and a bit before - and perhaps during the 60s as well.

The generations after that, be they the Malays or Indians, may not experience as much of this conflict as they are brought up in a chinese state and hence do not have the memory of better times via personal experience or having this knowledge passed on to them from their parents and others.  If they leave singapore eventually, the reason may be the same as the reason why singapore PRs might leave singapore - just looking for better opportunities or/and not feeling rooted in singapore.

Hence, the conflict i mentioned above dissipates.  That is when a statue of a Chinese mass murderer - deng xiaoping - can be erected in singapore....the unveiling of this monstrosity was a veiled warning to singaporeans that in the effort to maintain ‘harmony’ and the hegemony of the elite, it’s alright to slaughter people who question it with placards; the tudung can be banned in schools; LKY can state that in 2 generations Mandarin 'will be our mother tongue'; and singapore's MSN site can be called 'xin.msn.com'.....whilst most chinese can state that singapore is truly a multicultural state and they aren’t racists because they like to eat prata and mee goreng.

Additionally, for those who do not leave, especially for the Malays, they can become more socially inward-looking.  They might stick more to their own, take pleasure in their own cultural and communal events and so on.  That is why Malays in singapore these days, compared to the 70s and 80s, and perhaps before, are less cross-culturally/racially mobile.  Friendships/romantic relationship between Malays and Indians for instance, are observably far far less.

Besides this, another reason why singapore might become more palatable to the Malays is that they would have been underdeveloped enough by the discriminatory status quo to not aspire to more than they are expected or allowed to by discriminatory customs and conventions.  In other words, they now 'naturally' take to the sidelines....as, perhaps, the Muslim child in the above pic.   The problem always comes when those whom are discriminated against haven't underdeveloped yet.  That is when they are going to be armed with enough self-respect, skills, and aspirations, to feel pissed off about the status quo and the people (i'm a perfect example).

'Thankfully', for most of the new Malays and Indians i have seen, and even those of my age-group whom have been underdeveloped by the status quo, the conflict is quite resolved.....and peace and harmony in the face of chingapore's grossly racist status quo can be achieved, whilst this ‘harmony‘ is further expressed by Malays and Indians not sensing the racial/cultural self-absorption of the opposition.  That's the confucian way isn't it;)

Thanks for the link bro.  I think i read that article a couple of years ago when it was first published.  But it's good to refresh my memory on it again.  I'll leave you, and the reader with a related snipped it found on the net. 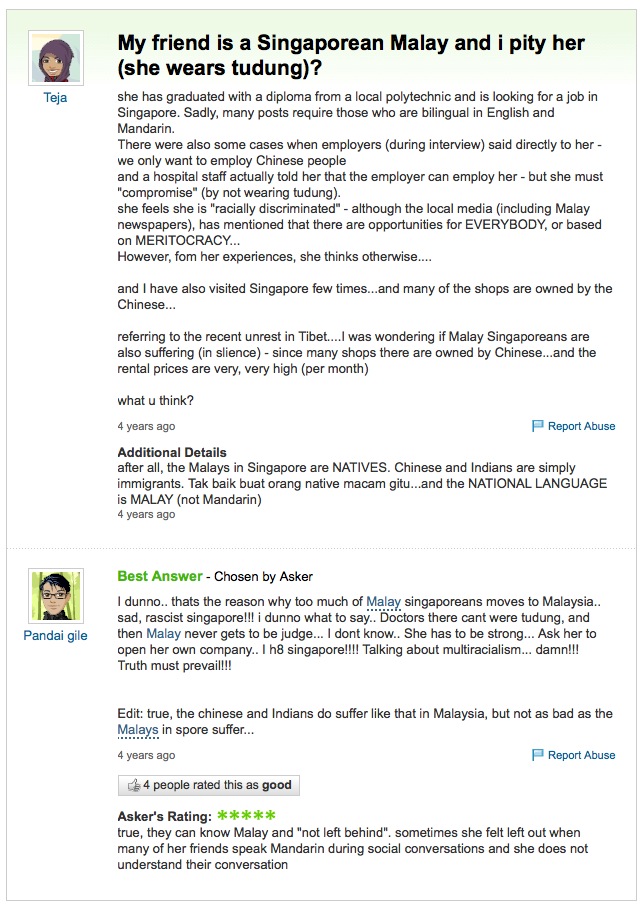