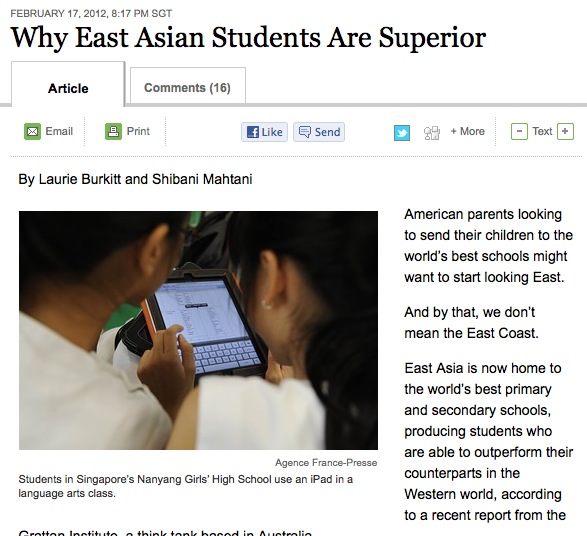 "American parents looking to send their children to the world’s best schools might want to start looking East.
And by that, we don’t mean the East Coast.
East Asia is now home to the world’s best primary and secondary schools, producing students who are able to outperform their counterparts in the Western world, according to a recent report from the Grattan Institute, a think tank based in Australia. - Wall Street Journal"


I come from singapore, and i can say that they are ‘superior’ in the sense of being able to learn formulae, memorise, and regurgitate. But as innovative, inventive, and out-of-the-box thinkers, from my experience, a mediocre student in the UK beats the ‘superior’ students of the east. It is the socio-cultural experience that enables one to make more of education as opposed to education serving as a ceiling. In that, the UK for example, beats the straight ‘As’ of the east. At the end of the day, it is the social curriculum that adds value to the academic one. In that, the east fails.

A superior student, at the end of the day, is not one who delivers the best of what is expected, but who is able to stray with as much ease beyond popularly and well-trodden path despite it not being expected.If you think about it, in a country where students are getting straight A’s, it might indicate retardation in quite a few arenas to the point people pay too much attention to academic achievements.  This is more so the case when this is being achieved in large degrees at lower than tertiary levels.  It indicates an inordinate amount of focus on the academics as opposed to life.  In my experience over the course of a decade in singapore, this theory seems to be supported.  People, generally, are averse to anything that isn’t trivial or practical, popular or prominent, and shun that which is different, requires thought, and, thought-out-of-the-box.

The litmus test which i performed on many, and which delivered identical results over a decade of social interactions and media productions, is in the arts (all chinese i’ve known over a decade, from lower to tertiary education, have failed this test, whereas only half of the malays and indians i have interacted with have failed it).  As it is the most abstract - unless one is simply copying artistic norms and trends from other climes - the intelligent mind, whether it is producing straight As or not, is the most capable of constructing new rules and formulae that takes on board the uniqueness of an experience, as opposed to relying on existing formulae to make sense of it.  In this, the ‘superior east asian student’ fail miserably.

To go by the east asian method is to simply condemn humanity to making advances within the arenas discovered in the past as opposed to going beyond to where our predecessors didn’t imagine.The eminent psychologist, Piaget, made an observation that the intelligent person would modify her/is theories and perspectives to fit with new information.  It is in this sense that the east asian student fails.  They seem to able to do this only when it is expected in the curriculum, by society, the government, their employers, and industrial standards.  But aren’t able to do this when there is no ‘practical’ need to do it.  Hence, amongst others, racism and xenophobia thrives in such climes.  Additionally, in social relationships from marriages to friendships, it is the same as in all difference is ignored and conformity is expected. It's no wonder, amongst other instances, that metaphors, analogies, wit, philosophical perspectives, are highly uncommon, and if encountered, are pretty much superficial and juvenile.  These are some of the instances that indicate the intellectual and creative status of a people, and the deficiencies in their method of 'education'.

The reason for this deficiency is that the social milieu, and Chinese culture, does not cater to difference, be it in sight, thought, or culture.  Hence, people do not make even more of what they study in school despite the straight As.  You could say that, because of the monocultural and traditionalist status quo, they are disabled before they go to school, and once there, again, because of the monocultural social milieu, they only take from education that which can be applied there.

It is the social realm within which knowledge can be applied, and the degree to which we appreciate that social realm, that determines how we appreciate knowledge when it is learnt.  If we were to narrow the social experience, our academic results may result in straight As, but what we make of it is a different matter.  For example, if we take capitalism to be a natural, then all our knowledge learnt in schools is going to go into innovating it, not going beyond it.  Hence, it is the degree of variance in society, and our appreciation of it, that determines what we make of our subjects.  In this respect, the east asian student is little different from her/is predecessors doing the Civil Service Examinations in China - appreciating knowledge within the narrow confines of the social experience.  Critical thinking, at the end of the day, requires a highly variable social milieu for it to develop within, and beyond.  A social milieu that does not provide that serves to narrow what a person does with the knowledge they encounter in the course of education.

In the light of the above, can one say that East Asian students are ‘superior’.  Yes.  Superior automatons perhaps.  Intelligent, creative, and generically dynamic people?  Certainly not.  At least not generally speaking.  A superior student, at the end of the day, is not one who delivers the best of what is expected, but who is able to stray with as much ease beyond popularly and well-trodden path despite it not being expected.

It is just such a tendency that hath created the academic, philosophical, and scientific advances that we are accustomed to today.  To go by the east asian method is to simply condemn humanity to making advances within the arenas discovered in the past as opposed to going beyond to where our predecessors didn’t imagine.