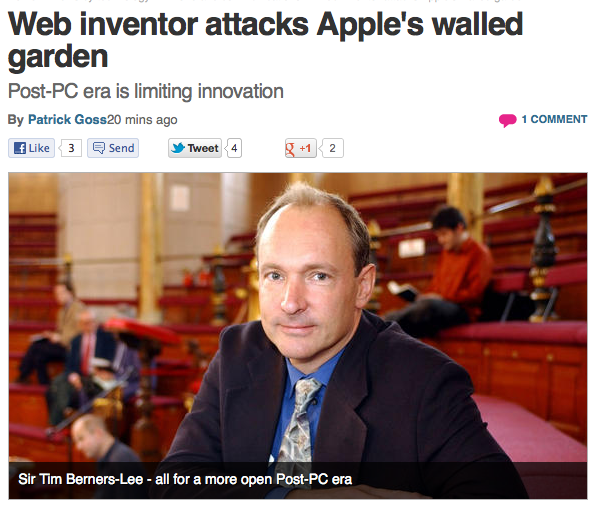 In a lengthy interview in The Guardian, Berners-Lee continued his crusade against closed systems, expressing his disappointment that the era Steve Jobs described as 'Post-PC' has shut down space for innovation.

He also referenced the oft-called 'walled gardens' that prevents users from making completely free and unbiased choices in the software that they use. - techradar

This proprietary behaviour by quite a few Corporations certainly does stifle innovation as it enables them to rely on such strategies to enforce customer loyalty in place of eliciting it by true innovation.

We've already seen this with the replacement of memory card slots with a paid-for service like iCloud, Sony and other companies allowing movies to be recorded on their products but which is purposely encrypted so that it cannot be played via other companies' products, etc, etc.  We also see how Apple, amongst a host of others, hold back including all available and relevant innovation from products so as to include them in future 'upgrades' so as to keep profits pouring in for old innovations included way past the time they existed.

Technological innovation and consumerism is a technological complement of ‘the pop life (pop music, movies, celebrity-worship, etc)’ where both appeal to our personal, self-interest, and desire for immediate gratification.  If people can be trained to become unawares in these matters that impact more immediately on their personal lives, you can be sure that they will be even more disinterested in other socio-political concerns that do not affect them immediately.

For us to reach a so-called ‘post-pc era’ where the tablet is certainly not as powerful as a PC, but is touted as replacing PCs, and perceived to be so by many amongst the masses, simply indicates that people have underdeveloped enough, and moved from being creative people, to being mere imbibers and ‘fans’ - a word that is discomfortingly ubiquitous, as far as the cogitating sector of humanity is concerned.  In a nutshell, for the tablet to be perceived as ‘powerful’ enough requires the people to be intellectually and creatively disempowered enough to view the former as true.

* a word to socialists.

The age-old and increasingly narrow focus on the source of evils such as the economic system and its perpetrators has to be complemented by focus on the contemporary means by which it is rendered increasingly palatable by the masses.  If not, socialists will find themselves fighting a losing battle where they can only hope for small victories whilst the overarching system becomes increasingly sacrosanct to the masses.

Socialists will have to show the people how capitalism is a great evil, not only in the usual sense of the word, (i.e. racism, imperialism, economic exploitation of workers, etc) but also an evil in a more personal, frivolous and every day sense such as in the seemingly insignificant issues of ‘why doesn’t the latest iPad have a memory card slot?’, or, ‘why can’t watch my recorded tv programmes on my PC!, or, ‘why is my mobile phone conking out after a year or so?’.

When socialists can get the consuming masses to think, ‘how has the profit motive being paramount compromised how long my refrigerator lasts’, they would have achieved much in cracking the system from the ground up.Through an appeal to and through their personal and seemingly frivolous interests, socialists may be able to ‘connect the dots’ for the masses, from a personal arena to a more overarching socio-economic-global one, and help them to appreciate that a disinterest in politics also means that their next iPad isn’t going to be more than it is.  Such issues would also have appeal to all classes, save the ruling ones.  Through this, the people can be taught that there is nothing that isn’t political.

When the consumer’s sense of justice is disabled, we can be sure that they are going to be less concerned or/and less vigilant or/and less vociferous in more distant socio-political-global concerns.  If we can incite righteous anger in the face of injustice in the most personal and frivolous of matters, we would have provided the masses good training ground for their involvement in more overarching ones.  When socialists can get the consuming masses to think, ‘how has the profit motive being paramount compromised how long my refrigerator lasts’, they would have achieved much in cracking the system from the ground up.