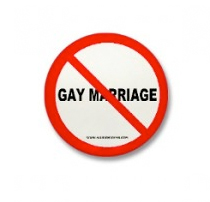 “The government's plans for gay marriage have been criticised by the most senior Roman Catholic cleric in Britain.

Cardinal Keith O'Brien, the leader of the Catholic Church in Scotland, said the plans were a "grotesque subversion of a universally accepted human right".” - bbc

Deputy Prime Minister Nick Clegg has rejected Conservative plans to treat gay marriage as a "conscience issue" on which MPs do not follow a party line.
Mr Clegg said it was something he and his party believed in and would be voting in favour of in the Commons. - bbc


Nope. I don't support homosexual marriages. It's unnatural, abnormal, given the fact that procreation is not going to naturally occur if all people were to prefer to go down on their same-sex neighbour.  Let it be confined to sexual relationships. But we shouldn't validate it as natural by allowing said marriages.  Homosexuality can be a ‘pastime’, or ‘penchant’, or ‘preference’, but at a higher level, of marriage and procreation, it should not be accepted.

The Catholic church is not an iChurch, like an iPad or iCloud, or other such ridiculously named variant, designed to be personalised to suit your passions and penchants.The church isn’t a parliament.  It has its own definition of marriage.  A parliament is there to satisfy the interests of the people, whether it is right or not.  It supposedly places humanity as the determiner of morals, whilst determining the identity and interests of humanity by manipulating it via whatever socio-economic system that profits the elite ruling society.  Hence, even then, you can’t say that it represents your interests as it is simultaneously determining your humanity, your passions, your choices, your interest, and so on and so forth, by practicing you in a system of an elite’s choosing.

But the Church follows, or attempts to decipher, the constitution of God, or whatever was left of it (the bible) after the first council of Nicea in Anno Domni 325.  It is there to explore the idea of right, despite the appetites of the day.  It is the last bastion, amongst other religions, against the tendency to determine what is right by what is popularly fashionable after the people have been manipulated by the elite.

That is why the Christ accepted his place on the cross, for, amongst other reasons, to show us that the pursuit of right supersedes the fashionable perspective of the day.  The church isn’t there to validate the popular proclivities of the day.  It is there to serve as a terrestrial beacon guiding humanity in respect of the morals that may be extrapolated from the teachings of Christ, amongst other teachers, from Guru Nanak, the Buddha, to the Prophet Muhammad.  It is not there to symbolically anoint all of ones passions as right and holy just because it is popularly pursued.  The Catholic church is not an iChurch, like an iPad or iCloud, or other such ridiculously named variant, designed to be personalised to suit your passions and penchants.

What if more blokes or women were to be inclined toward sex with sheep or horses, or really life-like rubber dolls, or threesomes and foursomes, should the church be marrying them as well just because it is commonly practiced?I don’t see why homosexuals should demand that the Church accept their union.  For that, they can go to civil marriage registrars.  What arrogance, or stupidity, to demand that God accept whatever they desire because the majority of them desire it.  That changes the entire meaning of the church.

Hence, pushing the Catholic church to accept homosexual marriages (the term ‘gay‘ means ‘happy’) is ridiculous.  What if more blokes or women were to be inclined toward sex with sheep or horses, or really life-like rubber dolls, or threesomes and foursomes, should the church be marrying them as well just because it is the ‘in-thing’, or quite commonly practiced?

As for the Liberal-Democrat support of Homosexual marriages,

I dare say one of the reasons why the lib-dems might support it is for the purpose of creating more mutually- supporting economic unions. Currently, it leaves out the homosexuals and lesbians. They would, overall, mean a lesser number of people whom can rely on each other on support so that they might be less reliant on the government and corporation. To exclude homos and lesbians, would increase, overall, the number of people whom might feel the strain of life in a capitalist society without the benefit of the opiate that is the thus unholy institution of marriage.