Elite subsidised to the tune of £75mill on Red Nose Day 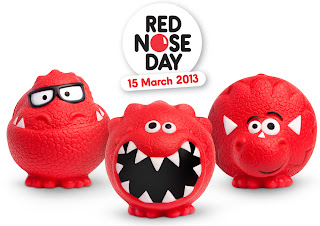 Celebrities and the public have helped this year's Comic Relief charity telethon raise a record £75m so far.

Comedian Lenny Henry, a founder of the Red Nose Day fundraiser which is now in its 25th year, kicked off the live show on BBC One.

For Comic Relief 2013, six celebrities were challenged to make a dramatic journey down Africa's mighty Zambezi River - to raise as much cash as possible for Red Nose Day.
bbc

We’re a bit in love with One Direction, and not just because they’ve recorded the ace Red Nose Day single.

Following a recent trip to Ghana to see how Red Nose Day cash changes lives, the boys said they wanted to do some fundraising of their own. So, they’re trying their best to raise even more money. But need your help…
one direction


The way i see it, celebs, the elite, and royalty earning-power should be limited to the amount earned by, say, a plumber.  Anything more should be given to charity.  In fact, they should be registered as charitable institutions, or treated like the National Lottery where all profits go to causes.  It is only then that their calls for generosity from the masses will not simultaneously be an exercise in subsidising the celebs, elite, and royalty.

It is not how much the celebs give for worthy causes that matters.  What matters is how much of their 'earnings' they've withheld, and if this amount 'earned' is justified.  Without addressing these questions, the amount given by celebs is nothing more than the price paid to whitewash their ill-gotten gains.

So these celebs do this stuff so that us peasants would be inclined to fork out money for the needy - with the needy not having to be needy if it wasn't for these overpaid celebs, elite, etc?

They are making fools of us all by making fools of themselves once every year.  I'm not saying it is intentional.  Perhaps they are just stupid, or self-absorbed, both of which share a symbiotic relationship by the way.

They certainly ought to be congratulated for this paradoxical sleight of hand that maintains the problems they purport to address.

They might be willing to don the red nose once every year, but it is the people who end up with a bloody nose the rest of the year.

Whenever i'm asked to 'donate' by tin-totting twits in singapore (my country of origin unfortunately), i say, 'i already gave. Go claim it from the government and your celebs'.

But here, i admit, i find it quite alright to give because the people are also simultaneously engaged in addressing the social inequalities that cause the class divide. Without the latter, the former becomes nothing more than an attempt to subsidise the elite.

But i have to wonder if Red Nose Days, charities, etc, are more successful, would it lead to a decline in popular pressure on governments. It is an evil system indeed where we can't do good without feeding a greater evil.

Actually, the purpose, or consequence, of 'Red Nose Day' and other events of its ilk, is to pass on the blame for many social evils to the people.

You see, if people can be presented as a part of the solution - by their donations being of help - then, by implication, it means that they are a part of the problem - that they aren't giving enough for said social problems to subside.

It is a psychological sleight of hand that affects the subconscious of the masses and makes them less pissed off with elite greed.

The elite gets what it wants not by what it does in front of your face, but what they get you to feel without your awareness.

In other words, no matter how much the elite take from the people, the people do not have a problem subsidising them via comic relief. Tragic comedy indeed. Record 75million. In other words, 'Record Stupidity'.

In a nutshell, Red Nose Day, amongst a slew of others, is just a case of the rich telling the poor to help themselves after depriving them of the resources required for them to do so without the need for charity.