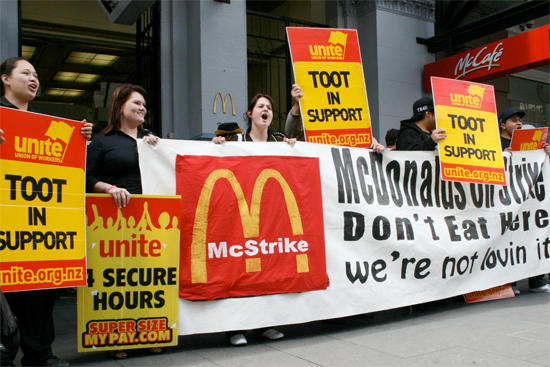 A small, spunky union in New Zealand has become one of the most successful fast food organizing efforts in the world, with more than 4,000 members at KFC, Pizza Hut, McDonald’s, Starbucks, Burger King, and Wendy’s.
- labornotes: how workers super-sized their pay in nz

Achieving worker's rights within a culturally hegemonic organisation that sells rubbish food distracts one from the reality of the latter...as it obviously has in this case amongst (bourgeois) socialists.

I'm waiting for the time when workers get together and SHUT DOWN McDonalds. Now THAT would be an achievement.

As for the above 'achievement', that's like unionising Al Qaeda or the CIA. How nice. The virtue is not in the act of unionising, but what hell you are unionising. McDonald's magnanimity in this case serves as another effort on their part in sanitizing and sanctifying their image.