of Redskins, Niggers, and Whitey 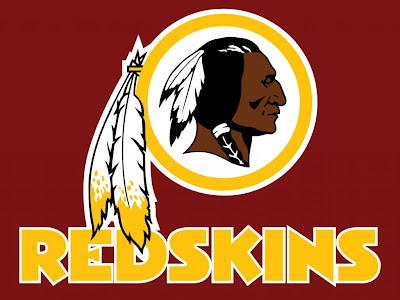 Pressure is mounting on the Washington Redskins to change their name because of the offence it causes Native Americans. But will a club steeped in tradition ever buckle?
It's one of the most famous names in American sports, with a logo recognised the world over.
But even fans of the Washington Redskins are facing up to a belief that it might all have to change.
For many years, some people have questioned why the football team has a name that Native Americans find offensive.
bbc

It is very interesting as to why the Washington ‘Redskins’ were named ‘Redskins’.  The term ‘redskins’ is very obviously derogatory as it was used to refer to, and reduce, a truly naturist people to nothing more than a contradistinguishable colour of skin, and oftentimes used in a demeaning context - as evident in many racist westerns and white colonisation history of the lands now unfortunately known as the United States of America.    (the term ‘naturist’ is used to refer to whites who, being divorced from nature, think they can reacquaint themselves with nature by getting naked and wobbling about without constraint.  Of course, it could refer to something much more spiritual, as exhibited by aborigines from the americas to India to australia in their oneness with the spirit of nature, mother earth, and so on.)

You could say that whitey has no problem glorifying the spirit of a people which they then used to symbolise their own, whilst happily cognizant of the fact that they have been marginalised so that they are no more a threat to white interests.


So why is it that whitey decided to call the team ‘Redskins’ whilst america was still in its racist state and had shuffled off the ‘redskins’ to reservations under gunpoint?  Perhaps, deep down beneath the mire of their ethnocentric conscience, they identify with the adventurous and ‘gung ho’ spirit of the Indians (another inaccurate term though). 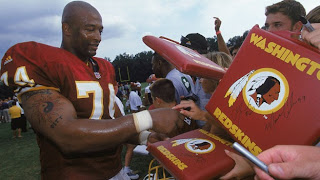 They were pioneers who sought a better life in the wilderness, and fighting the ‘white man’ themselves in the form of the capitalist gits who controlled and still dominate america.  Of course, they wouldn’t see the capitalists as ‘white men’ because these pioneers were white too.  But in spirit, they had to contend with the exploitative and greedy capitalists just as the Indians had to contend with the exploitative and greedy white men as a whole who slaughtered them en masse during their rushes through Indian lands where they just shot down any opposition to their land grabs.


So I suppose they recognised the similitude between them.  They were one in spirit, but their cultural and ethnic origins had to be called upon to determine who had the right of tenure.  Hence, they failed to form a union with the Indians.  But, as I have stated, the subconscious appreciation of the Indians as being in a similar wagon as them was still there.  (But the difference is more significant as the white working class were behind the genocidal trigger of the white upper class.)

ed: Yeah?  So only 2/3s of you is present at Thanksgiving i suppose.


Hence, to name the team Washington ‘Redskins‘ was actually an effort to laud the spirit of the American working class whilst happy in the fact that could have more because they had disadvantaged, killed, and marginalised geographically their ‘redskin‘ brethren.  You could say that whitey has no problem glorifying the spirit of a people which they then used to symbolise their own, whilst happily cognizant of the fact that they have been marginalised so that they are no more a threat to white interests.

Ironic, I know.  But that’s the ‘greatest nation on earth‘ for you.

...Strange that the blacks on the 'Redskins' team don't seem to bother about the racist name of the team. I wonder how they would feel if there was to be a team called 'niggers'.  But that would be another story, though still a chapter in the selfsame book. 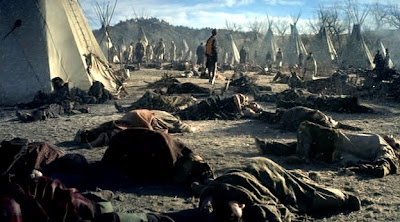