What makes a film line quotable? 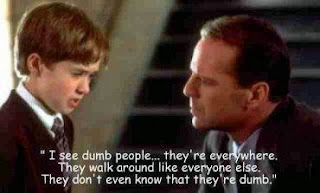 What makes a perfectly-quotable line for a film?


George Tiffin, film-maker and author of All the Best Lines: An Informal History of the Movie in Quotes, told the Today programme's Evan Davis: "The kind of witty remarks that trip off the tongue...are actually written by [scriptwriters] who have spent many years staring at a blank piece of paper."

He added: "We want to believe that every human being is capable of zingers and witty remarks," and in films, people can say the kind of things they wish they could say in real life situations.
Averil Leimon, a psychologist, examined whether men quoted from films more than women.
She explained that for men, quoting from a film is, "a quick and clever shorthand way to bond with people without having go into any intimacy at all."


I remember the 'intellectual' stir The Matrix and Avatar caused.  People on the net from the east to the west were discussing its philosophical and social implications.  When I told a woman here not too long ago that Avatar was a kid’s movie, she was taken aback and said, ‘No! It’s not a kid’s movie.  I liked it!’.

Right.  Just because you are an adult doesn’t make your pastimes that of a adult.  People tend to think that to avoid facing the possibility that they might just be idiots.

He who knows not more, knows not better enough to not quote film lines.

But that led me to wonder why I didn’t think likewise as most whom were fervently discussing Avatar, or The Matrix and walking away giving themselves a pat on the back for being smart.  I suppose it has quite a bit to do with my having checked out western, Indian and Chinese philosophy, and hence naturally moving on to think the said movies were 'elementary my dear Watson' in philosophical content.  They were basically introduction to socio-political philosophy for kids.  A philosophical 'Seseme Street'.  But for adults to think it as worthy of discussion just bespeaks their underdevelopment - ‘underdevelopment’ is a nicer term than ‘fucking stupid’, I’m sure you’ll agree.

Do we need a kid’s show to stimulate discussion? Or to memorise lines from and to quote them as if Hollywood is a viable substitute for a proper education and critical introspection?  I’m personally tired of people quoting the Spiderman movie - “With power comes great responsibility” - as if they really know what it means  - like the duties of the citizen to make more of themselves than just ‘fans’ and ‘likers’ of this and that.  He who knows not more, knows not better enough to not quote film lines.

"What makes a perfectly-quotable line for a film?", i suppose, is a better title than "What makes you quote a film line perfectly?" - as the latter puts the focus on the kind of people who do such things.

The bottom line is,

What makes a film line quotable is the masses not knowing, or wanting to know, more than is required to quote a film line.

Now put that in your list of quotes to quote when you’re inclined to quote a line from another movie.