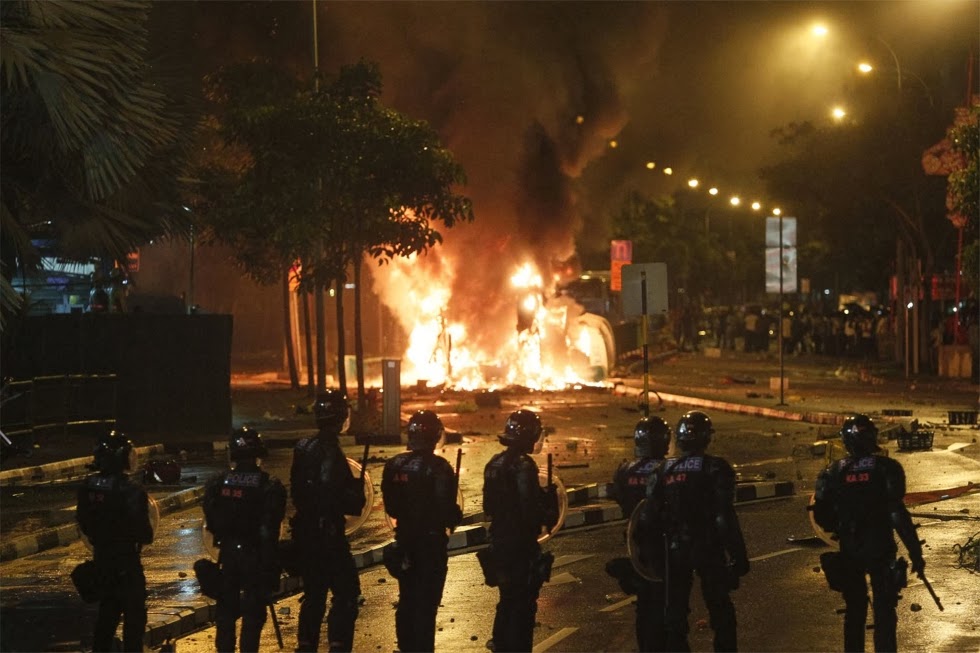 For the first time in decades, a riot broke out in central Singapore on Sunday night, bringing to light simmering discontent among the island nation’s migrant community.
An angry crowd of South Asians turned violent after a bus ran over and killed an Indian worker as he was crossing the road in Singapore’s Little India — a vibrant cultural district of shops and restaurants that serves as a hub for the hundreds of thousands of Indians working in Singapore — at about 9:30 in the evening.

Breaking down the demographics even further: According to the non-profit group Transient Workers Count Too, there are nearly one million low-wage migrant workers in Singapore — they make up about 20% of the country’s total population — who do the dirty, dangerous and lowly paid jobs that Singaporeans don’t want to do. These men come mostly from India, China, Bangladesh, Indonesia and the Philippines and work in industries ranging from construction, sanitation, manufacturing to domestic work.

“Migrant workers … contribute immensely to Singapore society and our economy yet they often suffer unconscionable exploitation,” says the group, which can include long working days (or no days off), substandard accommodation and unpaid salaries. They also suffer from social discrimination and the frustrations that come from having few choices in their lives. - forbes

I'm from singapore, and currently living in the UK, and i see that the government in singapore is now implying that it was drunkenness that caused the riots.

This is one of the strategies they used to demonise the Indian population back in the 80s, and thereafter, as it pursued the policy of turning the once-Malay state of singapore into a chinese one, and getting rid of opposition from the politically and multiculturally more vibrant Indians.

It was also during that time that the former PM Lee Kuan Yew also stated that singapore must always have a racial balance in favour of the chinese.  He also brought out the 'drunk Indian' card to get rid of the indian President, Devan Nair, who was beginning to oppose the government.  In addition to this, Chinese culture was promoted, Mandarin promoted as 'cool' and 'an advantage' and promoted for work-use, whilst the non-Chinese were barred from taking it as a 2nd language via the 'mother tongue' policy.

So not only was the image of the Indian promoted as a 'troublemaker', a 'drunk', or someone who likes oppose for opposing sake, but they were systematically underdeveloped by racist policies and media and political representations where Indians are cast as either a bane to progress, or just inconsequential props in a wholly chinese theatre (see tourist promotion board in Little India, on the right, that just brushes aside the Indians and speaks only about the history of the Chinese in Little India)  It is within such a context that one can begin to understand the socio-economic-and political context that new migrant workers have to contend with.

So it is not surprising that the same card is being played to dispel any notion that there might actually be an economic and social cause to the ire of the rioting 'drunken' Indians.

I recall one incident when a few chinese men whom were drunk were throwing bottles and causing a problem at a coffeeshop.  Somebody called the police, and when they came, one of the police asked me where the men had gone, and after i told them, they asked as if it was an accepted fact, "Indian is it"?  And another Indian friend of mine who was arrested after an incident with his wife had his request to see the Investigating officer denied, and according to the policeman who delivered his request, the IO dimissed his request with a ‘Indian guy is it?  Must be drunk”.    One of the points missed by most is, if drunkenness can cause this, then India should be inundated with it.

I left singapore because of Chinese racism....as did most of my other Indian friends who used their qualifications to get out.  You can be sure that this incident will be further used or forwarded by both the government and people to further demonise the indians and extoll the virtue of keeping it a subservient and ever kow-towing Confucian Chinese state.  And it's going to work as well, given the government importing chinese from China to make up the 'dwindling' Chinese population...even though they make up more than 80% of the population.

All those idiots complaining about foreigners, don't forget, if you are chinese or indian, your ancestors were foreigners as wll.

And the chinese were, and are, well-known for gangsterism and racism as well - the people and the government.  So before you complain about 'foreigners', take a look in the mirror, and think about how you self-centred racist and xenophobic cretins are exploiting discriminating against the NEW foreigners and non-chinese locals instead of dismissing it as an alcohol-induced tendency.