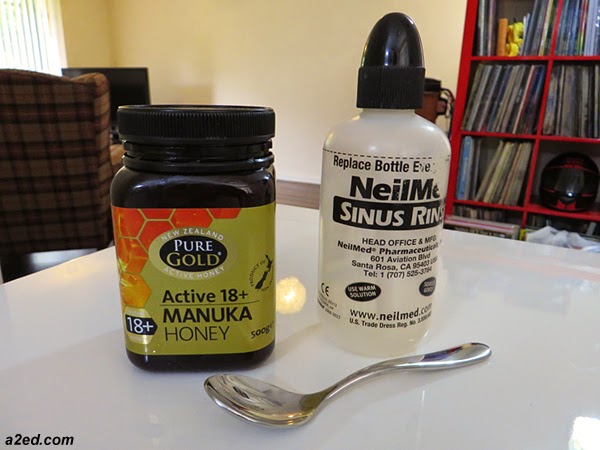 Now, if you want to skip directly to The Cure, scroll down to ‘The Procedure’.  But I thought that I ought to write my experiences for the background so that one can see if the cure only works with a particular background, or how one or other factors might have influenced the maintenance of the problem, or just to let you know how bad it was and how easy it was to cure.

I was suffering from a pretty bad sinus infection for about a year, till 3 months ago when I cured it decisively.  Before curing myself, I first went through the usual route of going to the doctors, trying out a few alternative remedies I read about on the net, none of which worked.  I went to the doc’s in singapore, he prescribed me a week’s of pills (augmentin) and told me to come back if it didn’t work - he should have prescribed me at least a couple of weeks of medication considering that I had already had the condition for close to a year, but he obviously didn’t....so that he could collect more consultation fees when I returned for a re-prescription.  A chinese doctor, whose CONsultation consisted of, ‘oh, so it hasn’t gone off yet?  Ok, I’ll give you another week’s medication.‘   It worked!, for a week. And then it came back again.

Then I returned to the UK, and after the stifling pollution of singapore where the chinese are allowed to burn offerings to ancestors just about anywhere they want, whilst you can only smoke cigarettes at designated spots, my condition got even worse, and the ‘haze‘ from Indonesia that provided a thin veil of white over this sad state of affairs didn’t make things better.  So off to the doc’s again, this time in the UK.  No con-sultation fees here.   I was given a couple of weeks of pills - amoxicillin - and three months prescription for a nasal spray that was supposed to break down whatever swelling and build-up in the sinuses.  After finishing the pills.  It worked! For a week.  And then it came back again.

So now it was alternative therapy time.  I tried drinking Apple Cider Vinegar, used Neilmed nasal salt rinse, included a couple of drops of ACV in the rinse, and still used the nasal spray prescribed by the doctor.  A couple of months passed.  Sometimes it got better, sometimes it got bad, sometimes it got worse.  Neilmed was rubbish.  Cleaned, but it somehow couldn’t kill the infection.  And they were bloody over priced as well.  If you think about it, they send you salt sachets at a price where you can but many times more sea salt.  And if you try to buy their cheap containers on its own, they only sell them to you with a few sachets of salt and price it at 10 quid.  What?  10 quid a plastic bottle.  These are all almighty rip-off companies.  That’s capitalism for you.  They speak against piracy, but profit from it daily themselves.  But the bottle is a must-have, unless you can get your hands on an equivalent.

Then, one night, out of frustration, I tossed it all aside, took a teaspoon of Manuka Honey Factor +18, put it in the Neilmed nasal rinse container, filled it up with water, heated it till it was lukewarm, and used it.  Went to bed.  Next morning when I woke up, hmmm...very clear!  I had one nasal backflow at about noon,(that’s where you feel mucus going from your nose down the back of your throat...yucks) and it only had an extremely faint taste and smell of the usual sinus infection taste and smell.  And that was it!  It never came back.  I’m writing this 4 months later so as to ensure that this cure worked where all the pills from singapore to the UK, apple cider vinegar, breathing in concoctions of tea tree oil, apple cider vinegar, salt, etc, didn’t.

I’m kind of exaggerating here about the cure being effected within 24 hours.  So you think that it took longer right.  No.  It would be more accurate to say that the cure, or at least the cessation of ALL symptoms, took place within 12 hours.

1) Like mentioned above, you need a teaspoon of Manuka Honey.  I used factor 18 (+18).  Perhaps lower factors could work as well.  But I didn’t have lower ones at home so I just used the 18.  I did not use the Neilmed salt or any salt.

2) Secondly, I used mineral water to fill up the bottle.  Many have said that you should use distilled water.  I think they are right.  I couldn’t get my hands on one of those so I just used the mineral water.  Not sparkling of course. ;)  Make sure that the water is lukewarm.

3)
i) I stuck the bottle up one nose, not too deep, as the inlet to the sinuses are actually just slightly inside the nose.

ii) Pump gently whilst pressing the other nostril closed with your finger so that your sinuses can fill up with the concoction instead of it just going through one side and flowing out the other - like common sense does with most people these days.

iii) Don’t pump too much as we don’t want the liquid to go to your ears.  When you sinuses are full, you’ll know it. I also moved my head side to side after filling up my sinuses so as to swish it about inside or to ensure that all corners are reached - don’t know if that was necessary, but I just did it.

iv) After about 5 seconds, release the other nostril so that the concoction can flow out.  Then keep pumping at least half the bottle and let it just flow out without holding the other nostril.

v) Repeat on the other side.

You could, if you want, use a whole bottle for one side and another for the other, the first time you do this so as the really whack the problem.  I did it three times a day for a week, then cut it down to two times a day for another week or so, and since then, it has been just once a day every night before bed.  It’s just a cleansing thing I do now.  But all symptoms ceased within 12 hours after this treatment.

The problem is, we have become too dependent on western medicine.  It’s all a part of the fascist hold western cultural hegemony has over the minds of the global mass.  I’m not saying that we can’t learn anything from the west or western medicine.  But we need to do research into other cultural solutions to problems, medical or otherwise.  We have to realise that western medicine is largely driven by the quest for profit as much research and development is led by profit-greedy pharmaceutical and related companies.  And the people are too reliant on them and busy raising funds to pump more money into these industries so that they can get their cures in a 100 years instead of a 110 years...whilst squandering billions on their celebs, royalties, and economic elite.

From cures for cancer to HIV, or to the simple sinus infection, it’s all about what generates money, not cure.  If so, how is it that this cure I stumbled upon has eluded the multi-billion dollar industry.  Just know one thing.  If it is cheap, they aren’t going to bother.  Take that as your guide and venture out and be a pioneer where most, these days, just sleepwalk to the tune and rhythm of global and largely western-driven corporation.  Most good within a system of evil generally exists because it doesn’t significantly compromise evil.