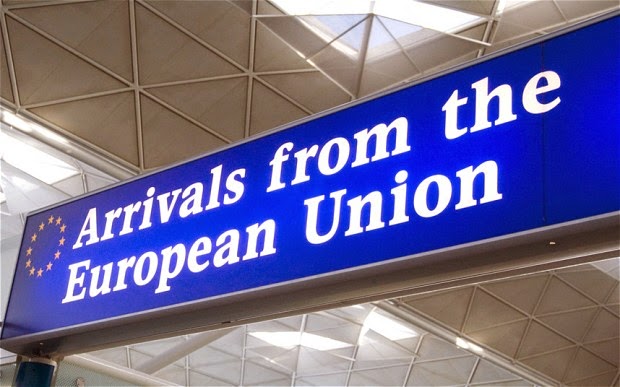 
Mr Osborne said the British people wanted concerns about EU immigration and access to benefits addressed.
The German government has insisted the right of EU nationals to live and work in other member states is sacrosanct.
Angela Merkel has reportedly said she would rather see the UK leave the EU than allow a quota system for migrants. - bbc

On the issue of migration within the EU, I don’t see the problem.  Of course there is the immediate situation of the lack of jobs in the UK to cater to both EU migrants and locals.  However, this problem will dissipate as EU migrants get relatively rich off their stay in the UK.

Over time, a lot of this money will get sent back to their home states to develop industries and skills, which will in turn enable their economies to take in British workers.  And this might be even more so the case as the (white) British, according to a few foreigners I’ve spoken to, ‘are polite but unfriendly....not welcoming....like strangers even though you work with them for a few years’.  Hence, given British aversion to being integrative and multicultural - though lots of theoretical lip-service is given to it - we could plausibly hope that many EU migrants will also leave, with the money they’ve made, and set up their own business, etc, etc, and develop their economy enough to cater to workers from Britain.

...this is just a period of the relatively richer states in the EU giving other members an economic leg up via opportunistic leg over.
In the longer run, the development of the poorer states of the EU will give everyone in the EU more room to venture into, to work, to start businesses, and so on.


So this is just a period of the relatively richer states in the EU giving other members an economic leg up via opportunistic leg over.  In the longer run, the development of the poorer states of the EU will give everyone in the EU more room to venture into, to work, to start businesses, and so on.  Let’s not forget, also, that when migrants take what the UK has to offer, and input in their own perspectives and ideas borne of their own variable cultural experiences, we will see the emergence of industries, skills, outlook, etc, etc, that can be relatively quite unique, and hence, add on to the perspectival and industrial pool of the EU.

All that said, as I had stated previously, my reservations on the existence of the exclusive EU on the basis that it is racist because it excludes the non-western world who supported western Europe, and the UK, when the latter colonised them and exploited them for hundreds of years. still stands.  Well, if the British weren’t so racist in this respect, many non-EU members of the planet might be able to flock in and give the economy a good boost so as to enable it to support the poorer sector of the EU as well.  Just to ensure that foreign migrants, whether they be from the EU or without, do not actually place a strain on benefits and services, these amenities can be accorded to foreigners in proportion to the contribution of the household to the economy via taxes.