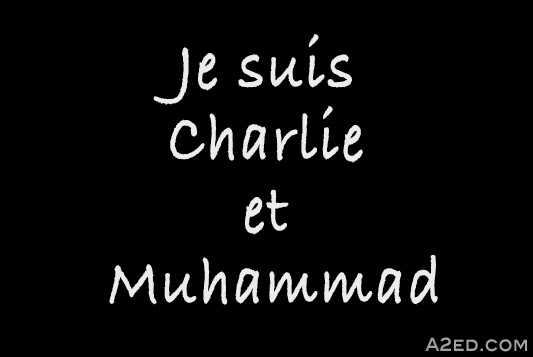 For myself, i'm Charlie and Muhammad. Mutual respect and love please.

And let's not decontextualise this situation. The cartoons are just the cherry on a cake of historical western colonial abuse of the non-western netherworld.

The cartoons are an insult in addition to a long-standing injury afflicted on the Arab/Islamic world. I'm not saying that the attacks are right. Certainly not. However, when you keep injuring another, we cannot be shocked when we are slapped back.

I'm explaining it, not justifying it, by the way. 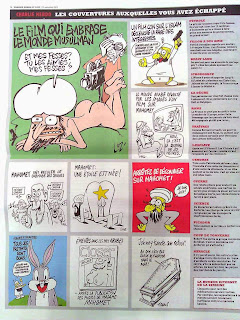 I'm for the lattermost of the three. Of course, freedom of speech is curtailed when i choose the third. Because then i can't rant like a child, or just be biased in my expressions like most adults. It imposes upon me the need to really think, research, consider, listen, empathise, and go beyond my own familiarised cultural norms to consider the aspects of other cultures to discern deficiencies in my own. But isn't that when free speech matures my vocal chords to my mind to the max?

What brand of 'free speech' is the west promoting via their support of Charlie Hebdo's brand of childish 'free speech'? (watch attached video) I join with the west in condemning the shootings, but that doesn't make what CH did right.

I was shocked when they came up with their grossly insulting cartoons of Muhammad (not all were insulting though). I'm not a Muslim. I'm Catholic. But it still shocked me. They were just far right-wingers disguised as champions of free speech. Now, with this horrendous massacre of their staff, they are being hailed as heroes?

Your shooting me because of the nonsense i spewed doesn't make said nonsense Holy Writ.

And finally, let's not forget that Charlie Hebdo's cartoons should be taken in the context of the west's activities in the middle east for more than a hundred years, Palestine, installation and support of tyrannical regimes, murderous embargoes and so on. Charlie Hebdo's cartoons in themselves do not deserve such a murderous reaction, but when we take the whole context into account, then we can began to understand it, if not condone it. This is a simple and simplified explanation, not a justification of the attacks.

It's kind of pathetic. Everyone, including myself, when criticising Charlie Hebdo for what they did, feel the need to state that we aren't condoning the violence of the gunmen. Looks like the freedom of expression in the west is paired with an unstated realisation that we aren't free to argue any oppositional case without being accused of being a terrorist supporter.

For myself, 'terrorism' is violence for political ends. In that, the Islamic 'terrorists' do not hold a monopoly on being referred to as such.' 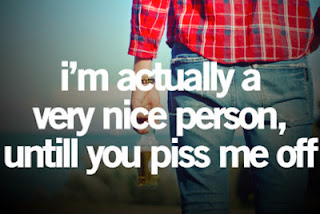 So when we take this into account, it is nothing but gross hypocrisy bordering on Eurocentric self-centred psychosis to call these people terrorists if we do not look into what we have done ourselves. And it is downright juvenile to think that all of this does not serve as the basis upon which these terrorists reacted the way they did to Charlie Hebdo's insulting images of Muhammad. The spark can produce nothing without the aid of existing fuel emanating from the west.

Not illustrating Muhammad indicates the expression and ability to feel a particular kind of profound and deep respect which I, and many others, are not accustomed to experiencing. A different and profound kind of feeling.
I'd like to respect that as a prelude to learning to feel the same way too. Who knows what sort of new profound feelings and views that can engender.
There are more facets to perceptive and perspectival reality that imaginable by the western mind alone you know. 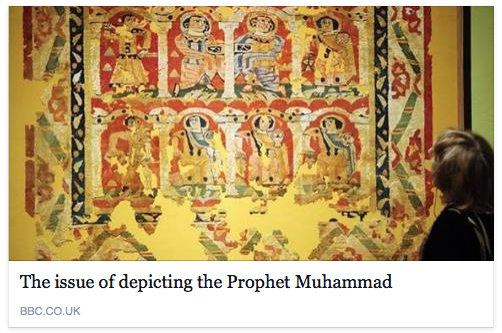 Muslims have a problem with drawn or any depictions of their Prophet or Allah. I suppose it is a sign of great respect.
I'm willing to respect it, and am interested to acquire the perspective from which such respect emerges as it indicates another way of looking at things. I think it means more than i've described.
So wondrous a creation, the more perspectives, and of greater or variable vantages to appreciate it, the better.

Satire, cartoons .... this is the west's attempt to understand things when they don't want to spare an issue more thought than a child might do a cartoon.

Maureen: No to racism, Islamophobia, and scapegoating


Scott: Easy to say if it is not your loved ones that have been butchered.

Ed: If we study the cause-effect contributory factors for the last century and this, we'll be faced with the fact that it takes two hands to clap. It's all too easy and self-serving to just look at this tragedy and view it simply as the pen versus the sword.

We need to take the wider context into account in determining accountability, and then take progressive steps towards dismantling terrorism, on BOTH sides. Progressive steps, to resolve this problem once and for all, means something else when it's starting point is based on self-centredness.

Paul: Easy to say its simply a matter of free speech if 1,000,000 muslims in Iraq hadn't been butchered by the 'western democracies' or the CIA with the compliance of the British state hadn't kidnapped, held in 'dark sites' and tortured god knows how many muslims - and whipped up a racist fever not seen since the 1930's whereby women in France are prosecuted for wearing the hijab, where demostrations in favour of Palestinians are banned and leading politicians say muslims are a 'fifth column'. George Galloway always said the illegal attack on Iraq would have terrible consequences and he was right. Racists are now using the shocking events to whip up more race hatred. I'm against them.

Scott: Few want racism or segregation, most want free speech (certainly in Western cultures) it is too easy to use such tragedies to push forward political agendas from any side of the political spectrum. Iraq (2nd time) appears to be a dreadfull mistake but it would be foolish to believe these attacks are purely a reaction to past events. There is a monster (disguising itself behind religion) trying to gain hearts and minds, little different to the far right, in its desire for conforming and controlling of world power. So perhaps solidarity for all those that desire peace is required, and for now a great deal of sympathy for those that have been lost. I don't suppose the self-serving Mr Galloway will waste much time or tears.


Ed: Let's put it this way. If all the past atrocities against Muslims didn't take place, what are the chances of this event against CH taking place?

To understand the west's perspectival stance against terrorists, and its very definition of it, knowing the perspectives that ruled the colonialists for the past few hundred years would help. It is only then that we can begin to understand how little we have changed despite all claims to the contrary.

As for the 'monster' of religion 'trying to gain hearts and minds'. This appears to be a clash between people of two different consciousness of universal brotherhood. One, makes a religion out of the state to determine who is a brother, and the other recognises ones brother on the basis of religious similitude even if he hails from beyond the illusory borders of the state.

I want peace and universal brotherhood, but we need to engage on more than a fair bit of critical introspection in order to bring it about.


Scott: It is possible to go back hundreds and thousands of years from any political perspective to find greviences that somehow give violent extremist the opportunity to take 'revenge' on political powers that they envy and dispise. This is not about Muslims as such or past disputes, it is the same story of ambitious individuals looking for a way to gain power and dominace.

It is too easy to throw stones at the west and dig up the past, the west generally does the best it can in a ruthless, complicated and disjointed world. Simple ideologies, rational argument and rheteric will never solve these problems as the opportunity to use violence to gain status and power undeserved without political process is too great an opportunity to miss. Those carrying out these acts are often ignorant, naive or have even been threatened or forcibly made to be the tools of those that are truly evil.

Honestly 'Universal Brotherhood' this will never exist due to greed and ambition, religion is just a tool used to advance these aims.

'Critical Intropection' will not stop extremists, it is actually pretty patronizing for individuals to take the moral high ground and have no practical means to solve these problems. We shoud be thankful for the bravery of our troops, the vigilance of our security forces and the resolve of our politicians.

Britain is by no means perfect or innocent but it does at least allow our discussions to take place.


Cliff: It is interesting that people do not want things from the past brought into a discussion about today's events but I am sure they would be quite upset if, for instance, inheritance from the past was cancelled out to! So for example the Royal Family can quite happily keep their castles and lands but never want to discuss the atrocities that brought them into their family possession in the first place.


Ed: We're not talkiing about hundreds of thousands of years. We are talking about continuity from the past 100 years TO the present. Using your logic, we could also say let's forget about the past and treat this as an isolated incident, and not link it to the islamic militancy before and after 11/9, and including 11/9 itself right. This militancy has continuity as well, and can be linked to in cause-effect terms to all that's been going on since colonial times to the present.

No doubt, given any situation such as this, there will be groups and people who will be jostling each other for power. But we need to look at the underlying causes for these events so that they are not repeated in the future.

The west has laid the foundations for much of these evils today. I suppose you think nothing of the west's genocidal activities in the world from colonial times to the present. Millions upon millions died being forced to feed 'King/Queen and country' throughout the globe, the indigenous population of Tasmania was decimated, along with the population of the Australia and the USA, slavery, forced growth of cash crops, carving up of regions for western self-interests both economic and political.

Self-serving to say this is all in the past when the consequences visit us on a daily basis. The middle-east is part of the ongoing story. And if the past is to be discounted because it is in the past, then why all the fuss over Remembrance Day? It is a usual psychological strategy for people to assign to the discountable 'past' so as to decontextualise current events that affect us. Why? So that our own contribution to these evil state of affairs can be ignored and the 'bad men' in the present can just be shrugged off as insane mad men who do what they do simply because they insane mad men.