'Terrorism' and respecting the right to retaliate 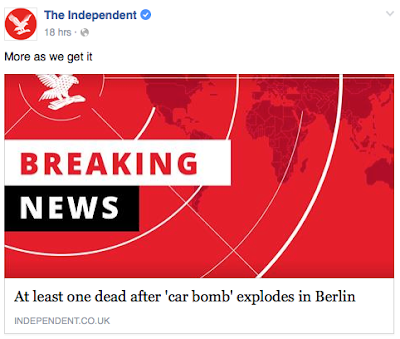 Simon Sammut: How's that latest wave of cultural diversity working out for you Germany

Ed: Before more guys go all 'terminator' on refugees, etc, take a look at your own history books to see who started the ball-rolling.

Cranston Greg: Oh that makes it ok then

Jonny Knight: That's right. Ignore the current problem because we should still be feeling guilty for the actions of our ancestors.

Riley Nichols: Another self hating leftist

Ben Hawes: We aren't allowed to defend ourselves against Islamic terrorists today because history? Seems legit

Ed: Cranston Greg, is retaliation ok? Or do you think like your colonial predecessors that those who throw a spear in the face of musket fire are 'savages'?

If you thought it was ok to ‘retaliate’ after 9/11, so why begrudge them a similar right in the face of your actions in the middle east?  I’m just using your own standards - except that it wasn’t the middle east that has been bullying and oppressing you like you have them for decades.

You sound like your colonial ancestors who actually saw people as savages if they threw spears in the face of musket fire.  You obviously think you have the right to shoot without the other side having the right to be pissed off about it.  That’s white supremacism for you.

When we respect others' right to retaliate, then we'll be more circumspect in our efforts to offend in the first place. The evil, my friend, starts with the one who threw the first blow, and in the case of the west, it went on and on for quite a long time didn't it.

Ed: Jonny Knight. 'Ancestors'? The people who did what they did are still doing as they did.

And I suppose you also think that half a million children killed via US and UK embargoes in Iraq in the course of ten years prior to 9/11 is a non-event too.

But its ok, you probably think that white lives matter more.

Ed: Ben Hawes. No. Not repeating your history would be a good place to start.


When we respect others' right to retaliate, then we'll be more circumspect in our efforts to offend in the first place.