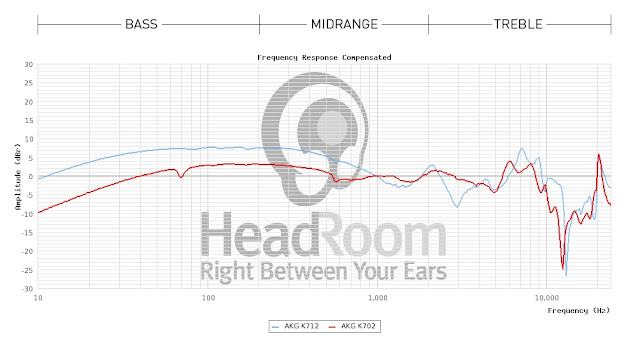 This is my current way of studying headphones Frequency Response Graphs.

The first picture shows a comparison (from Headphone.com) of the AKG K712 vs the K702. In that picture, we look at the zero line to determine the neutrality of the headphones, and the predominance of one frequency range over another, IN Relation to the zero line and IN Relation to each other.
Is that accurate? Is there are a more accurate way of determining the quality of a headphones? I've been considering this for a while....


Hence, now I'm considering determining the quality or neutrality (neutral sound without anything being too emphasised) of headphones IN Relation to a resituated zero-line that is placed 3-4 dbr down from the highest point or plateau of the bass-midrange curve on the left. And then, from there, we see the relation of the rest of the frequencies TO the plateau. I illustrate it in the latter two pictures with my own 'zero' line.

Of course, in this, we may not even need a zero-line and can just pay attention to how the frequencies stand in relation to each other. But resituating the zero-line to the 'ideal' below the highest plateau of the bass-midrange, and then looking at the rest of the frequency might give us a clearer picture of the degree to which the headphones might be warm vs bright.

In the latter two pictures, it appears that the AKG K712 is the more 'neutral' of the two.


NOTE: treble should roll-off after 1k so as to not be too prominent. If it is maintained at the zero-line, it will stand out too much as the human ear is very sensitive to that range. Hence, the need for the treble to be rolled off after 1k. 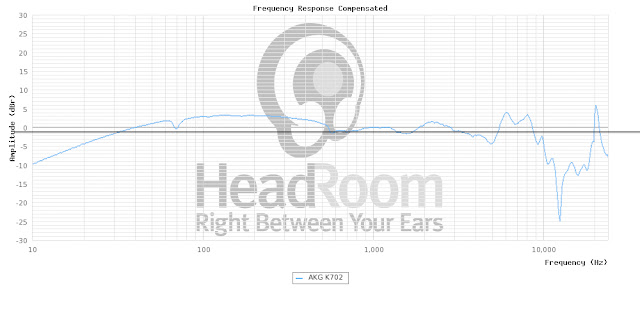 The K702 is slightly on the 'bright' side as the as it does not roll-off (downward) after 1k (1,000) and maintains its roughly treble-prominence throughout till 10k (10,000). Mastering with such headphones might see one toning down the trebles, thinking its enough, where actually, when you play it in normal headphones that has a treble roll-off, it will not be enough. 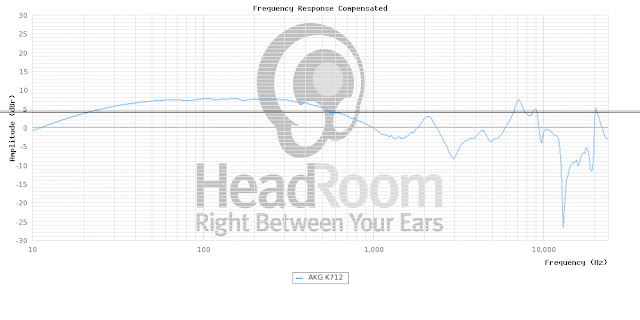 The K712's only problem is that the treble rolls-off a bit to early at 600hz. However, the rest of the treble range thereafter is quite ideal.

Hence, the AKG K712 is quite the significant improvement over the K702.