on the ‘Objectivity’ of Homosexuality and the ‘Virtue’ of Perversity 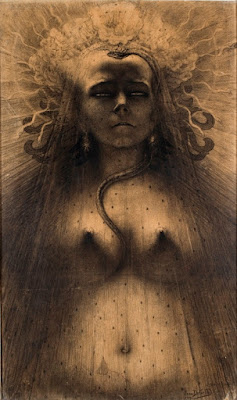 Homosexuals aren't perverts.
It is perverse conditions that give rise to homosexuality.

The ‘Virtue’ of Perversity

Hence, I wouldn't discriminate against or marginalise perverts of any inclination as most are acting naturally as a corollary of particular perverse conditions that is not of their making. In fact, perverts are pre-endowed with a highly unique ability to think and feel out-of-the-box. You could even say that they are potential luminaries in a host of fields. The problem is that the fascist Eurocentric society as it stands today globally does not provide the avenues via which such uniqueness can express itself. Its only hope is to cull such vibrancy in people from childhood through consumerism, 'education', and celebrity-worship, and through popular mutual censorship amongst the people who will refuse to respond if one was to express anything that is not of common corporate-produced interest.
This, in addition to the growth of mutual alienation promoted by the west amongst, and hence practiced by, the masses on a daily basis via the aforementioned, ‘popular mutual censorship’; computer games focused on killing and slaughter; ‘horror’ and ‘slasher’ movies whose highlights are the mindless or creative slaughter of people where evil triumphs; genocides conducted in the name of progress on the political front by favoured nations; wars of self-interest; internecine conflicts; technological ‘advances’ that see people living grossly insular lives via their ‘smart’ devices; brand-conscious and ‘trendy’ consumerism; celebrity-worship; films that train people to be reflexive with shaky cameras, flashing lights, swift camera-angle changes, absurdities, laughing machines; the reduction of people to mere commodities for utility; the sexualisation of society from the young upwards, amongst a host of others, tends to mutually alienate in gross proportions, and also sets the stage via which they might articulate their innate profound passions.

A predisposition toward uniqueness and great passion, disrespect for life, mutual alienation, sexualisation, narcissism, reflexivity, mutual animosity, all taught via the aforementioned and life within an exploitative capitalist milieu, all set the stage for the greatest minds to make their ‘mark of the beast’ as they are taught no other script.

A predisposition toward uniqueness and great passion, disrespect for life, mutual alienation, sexualisation, narcissism, reflexivity, mutual animosity, all taught via the aforementioned and life within an exploitative capitalist milieu, all set the stage for the greatest minds to make their ‘mark of the beast’ as they are taught no other script. All tend to set the stage for highly passionate, vibrant, and unique persons who cannot find satisfaction in the mundane, or who carry these lessons to the extreme in finally being able to at least ‘feel’ with great passion via perdition instead of creative and highly intelligent proselytisation to an audience whom are too busy updating their Facebook statuses with mundane check-ins to look up and appreciate out-of-the-box.
With the alienation that comes with the above social experiences, this paired with the desire to feel more, sees them taking these to the extreme and sees them channeling their life-force or chakra to locations down dark and abysmal avenues and pits. There they can ‘feel’ with great passion in that which they have already been trained by ‘modern’ culture, albeit via inclinations that they might not otherwise be attracted to if there were enough avenues above ground via which they might flourish. They are just more blatant products of a society where all other ‘normal’ people are similar in orientation but not in degree.
Hence, the highly rigorous energies and visions of many highly unique people flow down the canals of perversity, as they aren't able to find satisfaction in that which is promoted as the 'norm'. i.e. the Nazis, Homosexuals, Pedophiles, Terrorists, mass murderers, etc.
You could say that the perverts of any times are actually heaven-sent saviours, teachers, and saints, whose attempt to sermonize on the mount met with no audience, and hence, they move on to feel some satisfaction via dark means. From a religious perspective, the Devil has certainly structured society in a way that ensures that those who might actually stand against him through the celebration of Heavenly creativity, versatility, intelligence, spirituality, will become the foremost amongst his Mephistophelean brood.

The ‘Objectivity’ of Homosexuality

There is nothing wrong with people falling in love with each other. In fact, it is a wonderful thing. However, when closeness between same genders is INTERPRETED in a way that one considers it romantically and sexually, then we have to wonder about the social conditions that opens the doors to such interpretation.
The questions we have to ask is, ‘Have women become so masculine that the difference between a man and a woman becomes of little significance?’ or ‘Have women become so unattractive in persona that men are the next best option that we consider simply because we naturally tend to develop close friendships with our own genders at an early age?’
In a strange way, homosexuality is a practice in ‘being objective’ within perverse conditions. Where women are incorporated into masculinity by men whom are adamant in maintaining a dog-eat-dog civilisation, women become as unattractive as did the chauvinistic men who maintained a system that discriminated against women in the first place (perverse conditions). Hence, when one is ‘objective’ within such conditions, it would make sense to be attracted to the character despite the gender. That is an instance of legitimate passions being forcibly channeled down illegitimate ways. Therefore, whilst we could on the one hand say that homosexual or bisexual men are to be credited with being objective and ‘going for character instead of looks or gender’, it is the perversity of the conditions that sees such a tendency being cast as a virtue.

We all know, in the past, that when a man says that ‘looks doesn’t matter, only character does’, women would generally see such a man as the ‘ideal man’ for a heterosexual relationship. But with the masculinisation of women, this perspective tends to legitimize homosexuality itself as homosexuals can be credited with ‘going for character’.

We all know, in the past, that when a man says that ‘looks doesn’t matter, only character does’, women would generally see such a man as the ‘ideal man’ for a heterosexual relationship. But with the masculinisation of women, this perspective tends to legitimize homosexuality itself as homosexuals can be credited with ‘going for character’.
In a perspectivaly similar fashion, we can understand pedophilia, where certain legitimate factors inciting love or lust in men for women, i.e. innocence, humility, open-mindedness, sexualised presentation of self through behavior and clothing, being associated with young girls these days by the media and fashion, or where women don’t exhibit in as great a degree as they did before, will tend to elicit or invoke ‘reactions’ amongst some men who already have a unique predisposition toward objectivity and out-of-the-box tendencies, and which can have great benefits to humanity if such generic tendencies were provided legitimate avenues via which it can be expressed and developed. They too share a similar ‘objectivity’ with homosexuals in that they are focusing on the most important aspects of character in itself, or those behavioural and dressing stimuli, that were once associated with adult women.
Similarly, in the film by Francis Ford Coppola, ‘Apocalypse Now’, Colonel Kurtz attains a highly developed sense of ‘objectivity’ in his slaughter of people with no compunction and no attention to decorum or distinction that frequently whitewashes and sanitises the perverse tendencies of society at large expressed via ‘legitimate’ wars, death sentences, games, films, etc.
Or looking at the Nazis, we see Hitler being blatant about killing those whom they deemed inferior which was just a more blatant manifestation of what the British, the New ‘Americans’ and other white colonialists were already doing globally but under the guise of civilisation. Hitler too, was being objective. He did unto the whites and the Jews what the whites did unto others. These are all instances of various sorts of ‘objectivity’ under perverse conditions. In itself, their actions are only perverse in it is blatant and unrestrained in its objectivity. But in essence, they are only points or milestones further down the selfsame trajectory that the rest of ‘normal’ society exists.
When you pair such ‘objectivity’ with the perverse conditions of society that encourages alienation, mutual animosity, reflexivity and superficiality, the stage is set for the grand Mephistophelean drama for the perversion of those whom might be the greatest minds of our times, whom, are actually simply blatant manifestations of what is commonly held to be good and true.
I’ve always believed that objectivity paves the path to the Heavens. However, objectivity, within perverse conditions is the path to Hell. The west, in its obsession with 'the freedom of choice' have turned said 'freedom of choice' into a virtue in itself, without considering virtue in itself.
Labels: society