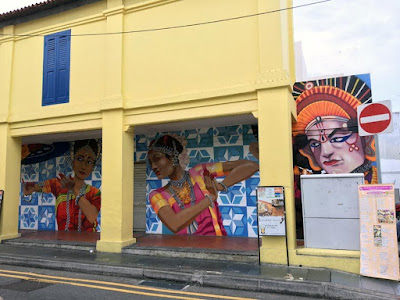 There is a tendency amongst Indians in singapore, especially Indians-of-Prominence, (for the sake of brevity here, i'll refer to them as IOPs) to only take on contradiction with much vociferousness, and belligerence even, whilst keeping silent in the face of those who proffer additional points, or whom may offer perspectives that they might not have thought of, or whom have proven them wrong. This is a tendency i've observed increasingly since the 2000s.

In that, it is all about 'me', and stoking one's own ego. Such people are a typical by-product of the pro-chinese policies of the government that really took off in the late 80s, and which thereafter led to the Indians jostling against each other for prominence.

I've often noticed, since the late 90s, that many Indians, especially the so-called 'educated' ones, will be silent in the face of smarter Indians, or just wait for them to slip up before using it as an opportunity to put them down - a proverbial, 'flushing out the baby with the bathwater'.

This tendency appears to be amplified in the case of Indian women, and especially those born in the late 70s onwards - who missed out on the experience of a relatively multicultural singapore in culture and ideas in the 70s and 80s. With Indian men with lesser education, they are simply generally aggressive about it, or insensible in their rebuttals. And it is pretty much pointless in pursuing the issue with either as they would take all rebuttals as a personal affront to their sense of self-efficacy. This is what i've generally experienced with 'educated' Indians to the 'gangster' variety. The discussion of issues, amongst Indians, appears to be perceived as an opportunity for ego-validation rather than for the purpose of 'knowing' and 'understanding'.

In that, these 'indians' do not realise that they are just a cultural variant of the chinese whose self-absorption they constantly complain about.

I was talking to a Chinese girl quite recently - with whom i go shopping at Mustafa once a week, and who is the only person i can pursue some intelligent conversations with in singapore - about the difference between singapore Chinese and Indians. She said, in a tone of disappointment that, "there isn't much difference now....they are the same as the Chinese". She is especially partial to Indians from Malaysia and India for their being, "very reasonable....can negotiate....very alive....quite humble". And i have to agree.....which is why i hang out in Little India once a week.....which is a far cry from my 'Far East Kid' days in Far East Plaza in Orchard Road in the 80s.

"Yes", i said, "but there are a few differences, for instance, whilst the chinese ignore contradiction in a nonchalant can't-be-bothered fashion by either going blank, literally turning away, changing the subject, or coming up with shallow excuses, the Indians, whom are more passionate, get angry about it. They've become like the Chinese, but with red chillie as garnish."

And that would be even more so the case since, already being cast into the underclass in a pro-chinese state, they will not be inclined to welcome additional feelings of inferiority amongst their own racial ranks. There is a great desire to prove themselves, and that leads to infighting.

What transpires in such a situation is a gradual gravitation toward a singular perspective amongst Indians, with those whom might have additional or unthought of views moving away, and those whom are of the more 'popular' opinion, and being aggressive about it, taking the lead, and developing a fan base around them.

IN that, they become no different from the chinese whom themselves gravitate 'towards their own' in perspectival singularity. In that, these alleged 'Indians' become Legalist-Confucians themselves abiding by the belief that any 'civilised' people will abide by one culture and ruler. That is terribly ironic given that they simultaneously, albeit with good reason, complain about racism. They fail to appreciate that what they should be at loggerheads with should be the pogrom against difference in itself, whether it be on the racism-front, or in the consideration of issues within their own rank and file.

This is a far cry from my experience with singaporean Indians back in the 70s and 80s - be they of the english-speaking Catholic, gangster, or Hindu variety - whom were most interested in another way of looking at things, or thoughtful in the face of contradiction. I had similar experiences with Africans and English whom i interacted with in the UK in the 90s.

You could say that the local IOPs are none too different from the Indian expats whom quite a few complain about. I have heard, in the past, about how Indian expats are 'arrogant' and 'look down on the local Indians'. Well, my dear IOPs, how, pray tell, are you significantly different in the face of other Indians amongst whom you play the bigshot eh?

These Indian expats come in here to do jobs that the local Indians can't do, or aren't given a chance to do, or have been underdeveloped by the government to ensure they can't do it. So, in this dog-eat-dog capitalist system that breeds internecine competition, it is to be expected that they have a bloated sense of their own relative sense of self-efficacy. The local Indians-of-Prominence behave similarly amongst their own don't they? Do you actually see them really considering other's views, and giving credit to them?

No. The local Indians, being lorded over by the chinese whom value their own sense of self-efficacy not on the basis of merit, but numbers, have these desire for immediate gratification when it comes to having their egos stoked. They want to feel good about themselves now! So once they get their own clique of fans, their approach is either, 'beware all contradiction', or 'ignore all insights'. Whilst speaking up for Indians, they do not want competition from them either.

When i look at the Blacks of America in those times when they were gradually struggling out from under the whiteman's heel, i appreciate how they supported each other. They served as a highly supportive mechanism for their own musical, political, and perspectival variations. That, is not the case amongst the Indians in singapore, whom, like the Chinese, gravitate toward the popular, and themselves serve as the Great Wall of Indifference in the face of difference amongst their own. In that, they become part of the problem. In that, they are gradually polarised, and imploded, and become an integral sinew in the tapestry of an overarching Legalist-Confucian milieu.