Are You Intellectually-Deficient Enough to Want a Rolex? 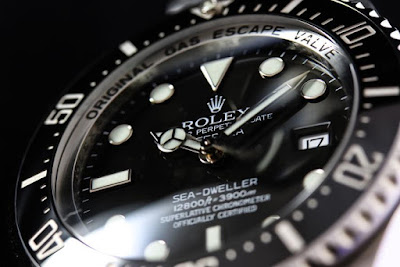 "How to Spot a Fake Rolex

The company uses the best steel on earth called “904L steel”, which is more rust and corrosion resistant. Rolex also makes, alloys and rolls its own precious metals to ensure the exact integrity of every watch.

Everything is crafted to absolute perfection, so take a closer look at the case, crown, hands, bezel, bracelet, and clasp – if anything comes across as sub-par quality, then you can be pretty sure it’s not the real deal." - bobswatches

Now, why on earth do you need something to be made from the 'best steel on earth'? So it will outlast you by a thousand years? Why's that? I have a Seiko 5 from the 70s, and it's still going strong.

And Rolex rolls their own precious metals to 'ensure the exact integrity' of the watch? What is that supposed to mean - 'integrity of the watch'? So that it will still function perfectly, or hold its shape even though its been rolled over by a steamroller whilst attached to your wrist?

'Everything crafted to 'absolute perfection'. In other words, to appreciate that, you are going to need one of the eyeglasses designed to peer at the so-called quality of diamonds. If the 'perfection' is not obvious for me to see with the naked eye, it don't matter mate. You want perfection? Go do something about your intelligence, creativity and humanity. It's a neverending journey, but you'll learn to see more, feel more, know more, and be one of precision that no Rolex, or its wearer, can match.  That's something that can't be simply confined to your wrist.

'Sub-par quality'? So long as it tells the time, i can wind it, and the watch doesn't fall off when i raise my hand to give the centre-finger salute, that's fine.   I don't need it to be accurate to the second.  Why would I?  Am i going to miss a whole movie if i turn it on a second late?

But if you're 'sub-par' in intelligence enough to still want such a nonsensically-priced product, than ask yourself how is such 'perfection' worth all that dosh in the first place?

...the function of all these so-called 'luxury', 'premium', 'branded' goods is for its show-off value.  And as for the ubiquitous use of words like 'premium', and 'luxury' associated with products, it just celebrates class division, exploitation, apathy and mutual alienation, and from which springs the division in enough wealth for some to have it whilst others can't.  It says less about the quality of the product, and more about how you are supposedly of more quality because you are shallow enough to pay too much for it.

This 'show-off value' has its own 'exchange value' like you see at the money changer's. "Oh, you want people to say, 'Wow!' and want to be your friend? And you want girls to flock to you and laugh at your dumb jokes and hang on to your every word, or maybe bear your children for you?" "OK, Here's a little $10 charm bracelet/bag/watch/doodah that you can wear on your person, and it will cost you a hundred grand. And i'll let it be known throughout the world that you paid a 100 grand for it so that you can feel real grand."

And such people are sometimes 'atheists' as well.  They are people who condemn 'superstitions' of ancient traditions, laugh at the religious, etc, but are still willing to fork out loads of money for these 'charms' designed to get your respect, love, happiness, a fuck, a wife, children, or a false and shallow sense of your own significance.....?

So these corporations are the new 'modern' age shamans, magic men and wizards? Are you mentally challenged? And in some countries they actually ban people from wearing religious symbols, and dress at work or school, but don't ban the rolex, or branded goods designed for its show-off value. This is what i call 'the perspectival infrastructure' that surrounds you and influences you at a subconscious level all the time, by telling you what is worthy of your aspiration and what is not.

I'd rather abide by the ancient saints and gods who teach and extoll the virtues of self-sacrifice, humility, wisdom, empathy, than this sort of nonsense that is designed to make less of you.

You see, if i went about waving a hundred grand at people, or fanning myself with it in public, or strapping it to my person in one way or another, just to show people i had money, people would call me a show-off, a pretentious prick, and deem it vulgar.

So that's where these corporations come in and give you some 10 or 100 dollar thing to put on your person in the form of a watch, bag, spectacles, and charge you a hundred or a thousand times more for it so that you can show the idiots around you that you got money. So that is supposed to be less vulgar and pretentious. It is what i would term 'ostentatious implication'. Your pretentiousness, your shallowness, is 'implied' by the 'branded', and thus not deemed as such because it is relatively subtle. And people are taught to worship such 'relics' of this 'modern westernised' world that seems to annoint you with some sort of 'superior-than-thou' divinity.

Doesn't that strike you as a sort of psychosis? A mental disorder or some sort, for which the west doesn't come up with a term because it is accepted as 'normal' though facts prove that it isn't.

You might say, 'yeah, you're saying all that shite because you can't afford to buy one'. Well, actually no. I can go out right now and get myself a Rolex. But that would be gross stupidity wouldn't it. There is a difference between 'pampering yourself' and 'reinforcing stupidity within yourself'. This falls in the latter category.

Hence, when i see a so-called 'adult' carrying a Prada, or wearing a Rolex, or a fancy overpriced car, i always think, "more dollars then sense", and the person is immediately classified as an idiot i wouldn't want to have a cup of tea with - though i have done so with such people in the past, and even more recently.

But i suppose i'm that way because i know what has value and what is sub-par.