Happy Year of the Sheep 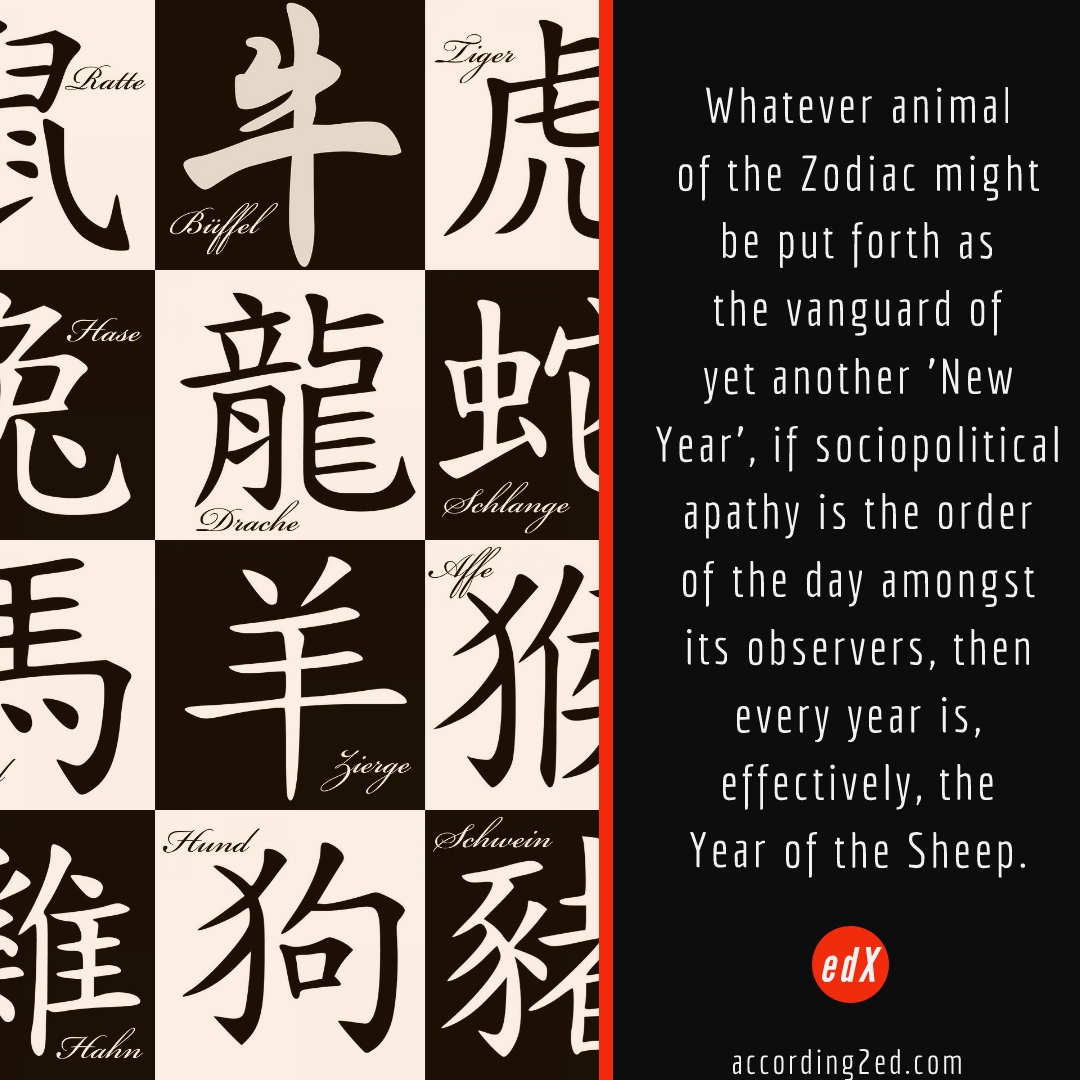 The reason why i do not like the 'chinese new year'. The cny is more of a 'coping and apathy-reinforcing mechanism' that enables the people to put up with, and perpetuate, the oppressive circumstances that gave birth to it.

Putting it simply, when there is enough top-down oppression that has been left unquestioned - as is the case in chinese history for more than 2000 years - a culture results that enables one to survive within it. It defines the idea of 'success', plots the trajectory of a people's aspirations as an individual and collective; defines the source of motivation; determines how people view and treat one another; determines the degree to which difference is discriminated against; and basically forms the paradigm and prism through which reality is made sense of.

Here is a simple equation illustrating this -

Even if this festival and culture is practiced within relatively democratic circumstances, it will leave the door open to the possible emergence and dominance of an exploitative and oppressive government.

That is because a popularly-practiced cultural system of not questioning authority; not questioning the way things are; relying on luck, lotteries, lucky charms, feng shui, and lucky numbers; stressing the importance of having children to support them, as opposed to the government they slog for; and 'doing one's best whatever the sociopolitical circumstances are', will serve as the means by which any government can do as they will knowing that the people are already armed with these 'self-help' tools to sort themselves out.

A symbiotic Yin and Yang-like 'balance' is brought about where the oppressed people devise ways to put up with top-down oppression till they can survive it, and then underdevelop and view themselves as less enough to make way too much of the little they are left to aspire to.

CNY is a celebration of this 2000 year old malaise initiated in 211 b.c. when the first Qin Emperor, Qin Shih Huang Ti ascended the throne, burnt all alternative books, and buried scholars alive, in favour of Han Fei's Legalism which demanded popular subservience.  Later on, Confucianism was added to replicate this top-down oppression at a popular family, employer, local authority, etc, level.  The intellectual vibrance of the Chinese in the era preceding the Qin was culled.

You could say that the chinese of today are the post-Qin chinese, as opposed to the pre-Qin chinese who were a completely different and intellectually vibrant people, and whom have my salutations indeed.

Hence, the CnY can be perceived as a yearly renewal of faith in not having faith in themselves as a self-determining, intelligent, and creative masters of their own destiny.

It is filled with the worship of wealth, symbols of luck and good fortune, lucky numbers, and gambling is a part of the celebrations - where people aren't averse to taking money off family and friends for their own good fortune - just like the government did or does to them on a daily basis.

On a personal note, ....in singapore, the former and late Lee Kuan Yew institutionalised pro-chinese favouritism by way of promoting chinese culture, stating that singapore must always have a chinese majority, promoting the usage of mandarin whilst forbidding the non-chinese from taking it as a 2nd language, etc, etc.

This led to the marginalisation and underdevelopment of the non-chinese, reduced the competition the chinese might have faced, and led the chinese to ignore all difference in race to ideas.  Hence, their intellectual, creative, cultural, and sociopolitical degeneration resulted, thus requiring the need for 'foreign talent' - new migrants.  They never managed to connect the dots between the institutionalisation of racism and their own eventual relegation to 2nd place in the face of the new foreigners.  Tragic comedy indeed.

So, for myself to wish any chinese 'gong xi fa chai' - Happy Prosperous New Year - is akin to saying - Keep Prospering at the expense of the non-chinese, despite your political apathy, and attempting to do your best whilst supporting a self-serving and oppressive government that affects mine and everyone's development and interests on a daily basis.

Chinese New Year, after all, is the celebration of the means via which the Chinese cope with their acceptance of their political impotence.  It isn't a simple event of wishing each other well.  Rather, it is wishing each other well whilst resolutely accepting overarching evils as the norm.  Racism, fascism, alienation, and gross opportunism, is hence, the order of the day.  Surreal indeed.

(that said, i still do give my chinese aged mother-in-law a couple of hundred dollars as a 'red packet' for the occasion as i like her.  I am quite fond of the older chinese generation whom are in their late 70s and 80s, of the slogging classes, and whom are simple, down-to-earth and sincere.  As they aren't generally educated, i can't really blame them for the status quo.  They too are victims.)

And as a Catholic, my faith empowers me to attempt to bring about the 'Kingdom of Heaven' here on earth.  Apathy and lucky numbers have no place in it.  I believe in looking toward God and nurturing the empathy of Man for our progress, not some lucky Pig and 11 other inmates of ole MacDonald's farm.  I am all for cultures of difference, but not one of indifference.

And logically, 'New' year is not really logical if one is going through a rotation of one animal of a set of 12 every year.  If anything, a 'Happy Rotational Year' would be more apt.