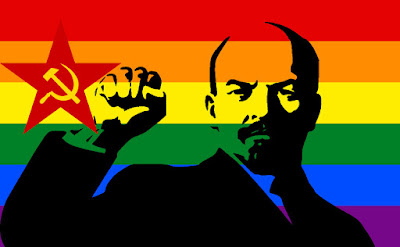 LGBTQ-promotion is constantly derided as 'leftist' nonsense in the west.

Firstly, let me make this clear.  I'm alright with people being lgbtq, but against its normalisation and promotion.  We can have all our fetishes, but demanding that it be represented in the media as normal to the point of promoting it, that's where I draw the line.  We need to retain our right to question our impulses, not normalise them just because we've turned 18.  Promoting the LGBTQ's agenda is the promotion of 'don't think, just do it'.

Well mate, regarding the idea of the 'Left' being pro-LGBTQ, I'm getting sick and tired of being the only one i've encountered with some objective and adult commonsense.

1. It is the Right that produced this homosexual/transgender/lgbtqxyz epidemic.

Why? Because within the capitalist system, all religion, spirituality, meaningful pursuits, etc, melts away, and in its place comes consumerism, materialism, hedonism.  People still want to feel 'free', and free to 'feel'.  You can't eradicate that from the Human psyche.

Look at the chinese, for instance, they've been trained out of the need to feel free by controlling their governments (in china and singapore for instance), and hence, enjoy the only freedoms left to them - to eat and be opportunistic.

In the west, with a more developed sense of 'freedom', but bereft of a more meaningful culture and being trained into seeing capitalism as the only system to live within, they are left with redefining their genders, amongst a whole host of other nonsense.

2. The so-called (western) 'left' goes under a broad banner of 'freedom and equality'.

Problem is, they are validating the psychologically negative consequences of the capitalist and nationalist system they purport to oppose - like sexual hedonism.

In that, they are going to end up satiating the people's aspirations towards freedom via their support of homosexuality and its variants, and in the long-run, perpetuating the capitalist system because people will already feel satisfied by being able to marry their own gender, amongst others.

For instance, they are calling for prostitutes to be called 'sex workers', giving them a greater modicum of respect and pride in their profession, and forgetting that prostitution is a result of the capitalist class-system that disadvantages some to the extent that they turn to prostitution out of desperation.  However, sexual promiscuity, aka, screwing around, has become so much a part of western 'culture', and evidence of 'being free', that this might just turn prostitution into a choice, rather than an act of desperation.

So the western 'left' is basically playing the role of an NGO within the capitalist system, ensuring that the system becomes more palatable to the people whose idea of 'freedom' is largely defined by the right. 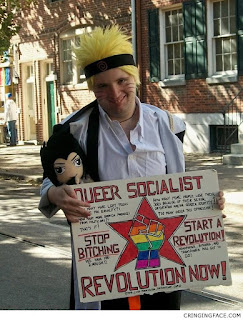 3. The western 'Left' cannot be confused with the 'Left' per se.

They themselves are a product of their own particular history. Their aversion to religion, their support of the negatives produced by the capitalist system, their taking Marx, etc, as their Gods, and their resolute ignorance of the cultures and wisdoms of the rest of the planet, all produce a particular sort of thinking and not thinking.  It's a particular way of looking at things, that require the rest of us to ignore all of our religions, cultures, wisdoms, in order to appreciate their vision of the way things ought to be in a socialist/communist/anarchist state.

Decency, modesty, the sacrality family, amongst others, are left to be defined by the Right through the capitalist/nationalist/hedonist/consumerist/etc milieu, and the so-called 'left' steps in when there is discrimination or aversion to any negative consequences arising from this that compromise 'freedom' and 'equality'.

They constantly fail to question and challenge the negative effects of the Right's system. Do they talk about family values, filial piety, how to translate religious principles into a socialist way of living?  Nyet! Do they question the gore, sex, promiscuity, absurdities, etc, shaky cameras, that the people are assailed with, and which compromises their humanity, their intelligence, etc? Nein!

They do none of these things, because they are all for 'freedom' and 'freedom of expression', without thinking about its origins, or negative consequences, or how it destabilises the left's intent to bring about a socialist state.

No, they aren't the left. They are the 'western left'. Left, right, left, right, but selfsame body that is right-handed in the definition of life, whilst cleaning its ass with the left. You could say in a paradoxical way, that the western-left is right about homosexuality, and hence ain't left.

I'm Left. A Catholic Communist-Anarchist of a southern hemispheric variety in perspective. I take some of the ideas of Marx, and the western Left, but know that much of the wisdoms of our cultures, religions,  Islam, Hinduism, Jainism, Buddhism, Christianity, etc, can be married with it, to not only engage our minds, but our hearts and souls as well.