The West's Immodest Attack on Modesty 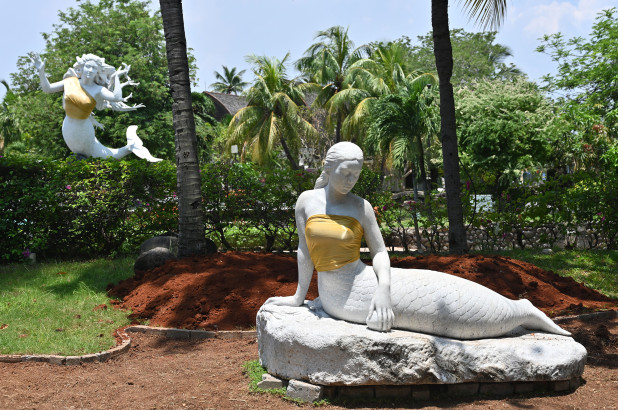 "An Indonesian theme park has covered the bare breasts on two statues to respect "Eastern values".

Ancol Dreamland in the capital city Jakarta placed golden chest wraps on the mermaid figures, which have been at the park for the last 15 years.

The move has confused many in the city and prompted questions about whether the park was forced into the decision.

But the park dismissed the suggestion, saying they had made the choice to cover the statues last year.

"This is purely an agreement from the management and there is no external pressure," park spokeswoman Rika Lestari told the BBC.  "We are in the process of reshaping ourselves to be a family friendly amusement park." - bbc

Here's a concept alien to the west of today - modesty.

There was a (colonial) time when the western colonial pirates condemned regions in the world for a lack of modesty, in terms of their being nude, and deemed that a sign of savagery. Initially, they were perceived by some as 'the noble savage' - untainted by civilisation and pure.

Perhaps they likened them to the Biblical Garden of Eden where Adam and Eve went about nude, in community with nature and animals. The etymology of the word 'savage' itself comes from the Latin, 'silva' and 'silvaticus' which referred to 'people of the wood' - no reference to Geppetto's creation - or forest. And then we have the later French word, 'sauvage', which means 'wild' or 'natural'. So when they came across our practically clothed, or unclothed ancestors - practical due to the weather - they saw them as such - 'wild and natural'.

But this gradually changed, perhaps when they got greedy in the face of all the resources these lands and peoples held.

I suppose, that rather than face the fact that it was they, the west, whom were immodest in their greed, and murderously savage in their pursuit of it, they just changed the criteria for 'nobility' to being able to subdue, subjugate, plunder, and all that was associated with their brand of 'civilisation', from being fully dressed, their language, and all their customs.

After all, the least 'dressed' in the west were the country folk, and the richest could afford the fineries which they used to distinguish themselves from the rest of those who worked hard for them to get it. So i suppose 'being dressed' was confused for a virtue itself. So that served as another basis for their view as those whom weren't fully clothed as savage with negative connotations of relative inferiority.

And all of this formed a scale of superiority-inferiority with whites on top, and black at the very bottom. And this also served to determine whether they ought to be exterminated or not. So, from the 'americas' to 'australia', the natives faced this sentence.

Overtime, they taught this mindset to everyone across the globe, even to the point that people want so much to be 'white', that they'd do anything from bleaching their skin to donning shirts, ties, suits, etc, even in sweltering climates. And these jokers just turn up the air-conditioning so that they can continue with their protracted cosplay in their offices.


Anyway, the idea of modesty has now changed in the west with the advance of capitalism - with its ensuing consumerism, hedonism, and influx of the juvenile as the main market - with debauchery and depravity being perceived as evidence that one is truly 'free' - i.e. being dressed to amplify one's sexuality to the LGBTQ-normalisation and promotion phenomenon. Hence, now that they've mistaken debauchery for 'culture', they're now going around condemning and ridiculing everyone who don't think likewise, for being 'prudish', 'backward', or 'conservative'. The white supremacist colonial attitude underlies it all of course - if they're doing it, it's right. Why? Cos its white.

They really do need to think more about what they're doing. Self-reflection isn't really their strong suit i'm afraid.

Alright, that said, the reason for this new brand of 'modesty' in Indonesia, and the need to cover up, is that they've eaten the Forbidden Fruit of the western apple tree, learned to lust like them, and now feel the need to cover up - like their counterparts in the Garden of Eden did after they gave in to the temptations of ye ole naughty serpent. And, also significantly, their Islamisation in the past also a reason for the 'cover up'. Hence, it can also be seen as an effort to stem the tide of western 'cultural' imperialism.

In the past, they, amongst many others in the southern hemisphere, didn't, and it wasn't a problem. Ancient historians reported that women in south india also went around bare-chested. And this was also the case in Africa. The problem is, in the west now, they view the celebration and promotion of lust as evidence of 'freedom', and view all who don't embrace this view as backward and worthy of ridicule - with the BBC frequently fronting this media onslaught on those who dare to be different from the west. That is why the BBC always makes the greatest effort to ridicule anything that is different from the west, or constantly seeks to point out the evils of religion to different cultures in those times when evils do occur in its name - whilst presenting whites as the only 'progressives' in human history, the present, and the future.