Sexual Abuse and the Catholic Church 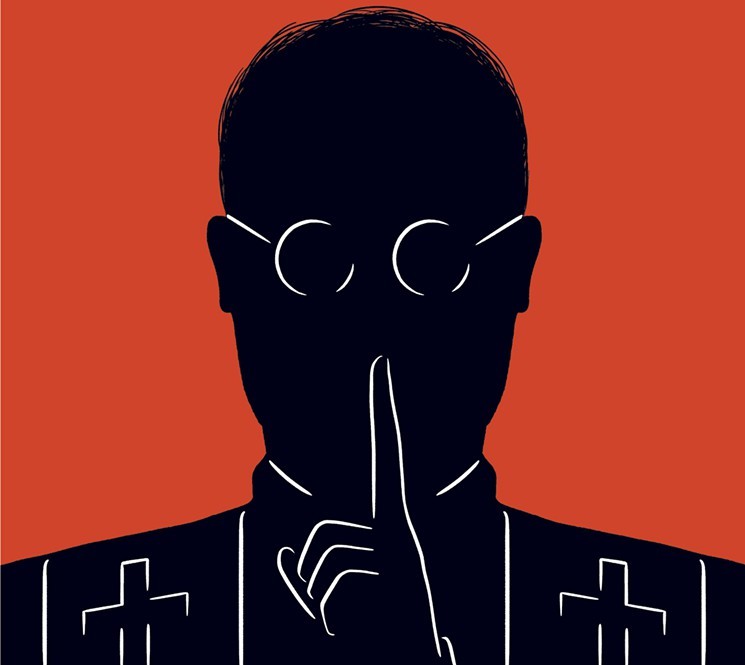 The degeneration of the church as witnessed in the ongoing sexual abuse discoveries within the Catholic church is in significant part,

These phenomena shows an all round acceptance, celebration, and promotion of sexual promiscuity and depravity in western society. In fact, the LGBTQ movement actually expects the Church to serve as a contraceptive to protect them from feelings of moral conflict. However, it has reached a point that they demand it, not due to moral conflict, but to align all moral beacons from global cultures to religions with their way of looking at things.  For them, today, being the worse one can be within the constrains of the law is the greatest expression and evidence of 'being free'.  It is within this context that we can began to understand the church's own evils.

One does not aspire to producing great works of visual art in the land of the blind.

Being a moral beacon is not easily pursued where immorality is celebrated, as the purpose of this aspiration is itself rendered redundant by a congregation whom have refused to see.


It is simple arrogance arising in significant part from the colonial legacy of 'white is right'. It is them against a 'backward' world, which now includes institutions within the western world as well. They are the torch-bearers of their own historically debauched civilisation which has come to its logical conclusion by their very existence. The west's past victories against all civilisations of the world serves as proof that they are always right. And with the inclusion of other races in the west, and across the world in their campaign, their stance to them is further vindicated.

The church, in its precepts and tenets, has always been in opposition to the western nationalistic, capitalistic, exploitative and consumeristic spirit. The clearest example of such opposition came with the emergence of 'Liberation Theology' in south America. But that was put down by the western catholic church as it made the church's opposition to the western colonial enterprise too explicit. And in an effort to not alienate the masses whom had already been indoctrinated to believe that capitalism and consumerism was the natural order of things, the church decided to try the subtle approach of getting them to do good despite the system to the point of just becoming an NGO within the system rather than questioning and challenging it.

Hence, the effect of the system on the people was allowed to continue without abatement. Thus, we have reached the point today where the church has now finally been largely discarded, and has itself fallen for the vices emerging from the system they had left unchecked. If an evil is left alone long enough to the point that one does not baulk at it, it indicates that one will be a short step away from assimilating to it.

Whilst some may point out that sexual abuse within the church precedes the western Sexual Revolution, it must be understood that the church serves as the 'litmus test' of the moral status of society. In other words, they would be the last to fall for the vices that are already endemic in society given that they are the supposed bastions of virtue and most resistent to it. When the great can fall, it shows that the rest are already lost. The fall of the virtuous is due to the 'critical mass effect'. It is the warning whistle of a kettle that is already on the boil with its contents being society itself.

Just as the bourgeosie enterprise had historically strained against the 'fetters' of the monarchy and colonisers so that may pursue their self-aggrandizing agenda with impunity throughout the world, the LGBTQuists and the largely sexually debauched civilisation of the west are similarly straining against the moral fetters of the Church and traditions itself to the point that they too can be assimilated. The catholic church's sexual abuse crisis is the result. And this 'result' has been increasing in tendency since the colonial project began.

The church isn't an entity comprising stoic statues and saints. It is made up of real people, facing daily pressures of hate, blasphemy, and ridicule, from the supposedly 'respectable' western news, entertainment, and celebrity media, and the masses whom are led by them. Hence, they will naturally be assailed by the unholy trinity of alienation, frustration, and temptation. If the overarchingly and accepted abusive and exploitative capitalist system isn't already enough to increase their tendency toward abuse, the 3 factors together will increase it even further.

The priests are assailed by both frustrations emerging from the above, an increasing sense of alienation, and also possible temptations to alleviate these frustrations through sexual misconduct. It is insensible and illogical to think that being sexually abusive is a natural corollary of catholicism, or being a priest, as the precepts and tenets they are expected to abide by is explicitly against it.

For the rest of the people whom are in need of wanting to relieve their frustrations, they can just go to a bar and do the 'pickup' and 'hookup' that is constantly promoted by the debauched western media. The priests cannot, and hence, may fall even harder with increasing frustrations, and a growing sense of alienation from society, which itself can reduce empathy and increase tendencies toward abuse to serve as a vent, and perhaps vengeance against society itself.  Psychologically, that can itself lead to enough self-hatred that in turn leads to frustration, and in turn, see them accessing the same vices for relief.  A never-ending vicious cycle.

It is difficult to proselytise virtue when debauchery is actually celebrated.  In the past, the virtuous were divided from the people whom were immoral in practice, but not morality.  The latter knew what they were doing was wrong.  But now, the virtuous are divided from a people by morality.  The people now think immorality is the expression of being free.  In such a case, the morality of the virtuous becomes largely redundant in their own perception, and hence, they will be more likely to fall.

One does not aspire to producing great works of visual art in the land of the blind.  Being a moral beacon is not easily aspired to where immorality is celebrated, as the purpose of this aspiration is itself rendered redundant by a congregation whom have refused to see.

One needs to understand the nurtured nature of the western and westernised mind.  We have seen how the west has, for instance, inflicted all sorts of evils on the middle east from colonial times to the present, and how it cost lots of lives there, but when they retaliate, they 'blame the victim' with the term 'terrorist', 'radicalised', 'extremist'.  The US incarcerates to kills criminals without effort to study, understand, and address the underlying systemic cause for the crimes they commit.

When a system is held to be sacrosanct, when a people view themselves as 'the chosen people' who unabashedly state, 'In God We Trust' whilst inaugurating one capitalism-championing megalomaniacal president after another, we can see an abject aversion to self-reflection and thinking about the evils ensuing from that which they do.  They will view themselves as the arbiters of morality and truth.

Their approach toward the Church in the sexual abuse crisis is identical.  This, the people in the west will refuse to understand, as they will then have to face their own complicity in the evils they bemoan.